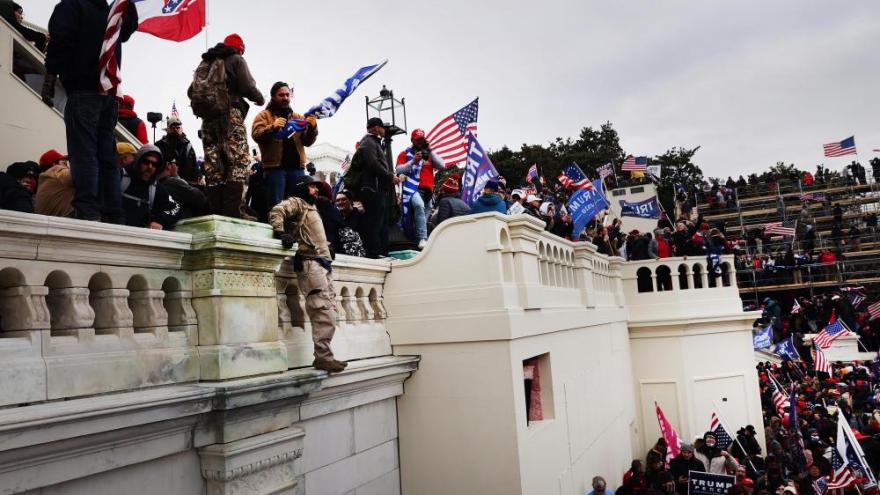 As the House January 6 committee continues its probe into the US Capitol riot and issues subpoenas, there are questions surrounding the role allies of former President Donald Trump may have played.

(CNN) -- As the House January 6 committee continues its probe into the US Capitol riot and issues subpoenas, there are questions surrounding the role allies of former President Donald Trump may have played.

Former White House chief of staff Mark Meadows, who could face criminal contempt of Congress charges for no longer cooperating with the House committee's investigation, "exchanged text messages with, and provided guidance to, an organizer of the January 6th rally on the Ellipse after the organizer told him that '[t]hings have gotten crazy and I desperately need some direction," according to the panel.

Meadows is one of several Trump allies and rally organizers who have been subpoenaed in recent weeks, and he alleges that the subpoenas are "overly broad and unduly burdensome." He also claims that the committee "lacks lawful authority to seek and to obtain" the information requested.

Meadows previously turned over around 6,000 pages of documents to the committee, including emails from his personal account.

And while a flurry of rioters have also been sentenced to jail time and proceedings continue against other defendants, various words to refer to what took place on January 6 -- "insurrection," "sedition" and "coup" -- have been brought up and debated.

The words "insurrection" and "insurrectionists" have been widely used by news outlets and others to define the storming of the Capitol building and the rioters involved.

Insurrection, or rebellion, is a crime under Title 18 of the US Code, punishable by a fine, a maximum sentence of 10 years in prison, or both. Being found guilty of insurrection also makes someone ineligible to hold office in the United States.

"What happened here today was an insurrection, incited by the President of the United States," Sen. Mitt Romney, Republican of Utah, said in his remarks on the Senate floor after the Capitol was secured.

Other Republicans have downplayed the violence at the US Capitol or denied anything violent occurred, including Texas Rep. Louie Gohmert, who said there is no evidence it was "an armed insurrection."

"Sedition" is the "incitement of resistance to or insurrection against lawful authority," according to Merriam-Webster.

Similar to insurrection, the act of sedition is also a crime under the US Code, which characterizes it as two or more people who conspire to overthrow the US government, or "prevent, hinder, or delay the execution" of US law by force. It's punishable by a fine and up to 20 years in prison.

The Justice Department has charged 11 defendants with seditious conspiracy related to the Capitol attack, including the leader of the Oath Keepers, Stewart Rhodes.

The department until now had been careful not to push the idea of sedition, instead charging defendants affiliated with right-wing groups with conspiracy to obstruct the congressional proceeding on January 6. The seditious conspiracy charge carries the same possible consequence as an obstruction charge, but is rarely used, politically loaded and has been difficult for the Justice Department to use successfully against defendants in the past.

Previously, some Biden administration officials believed using the sedition charge could politicize the Justice Department's prosecution of the Capitol attackers, and the department recoiled after the former top prosecutor over the investigation, Michael Sherwin, said on CBS' "60 Minutes" he believed seditious conspiracy could be charged.

Some elected officials have leveled the accusation of sedition squarely at Trump, including two Democrats: former New York City Mayor Bill de Blasio and Sam Liccardo, mayor of San Jose, California, and a former federal prosecutor. In a January 2021 statement, Liccardo said that Trump "should be tried for sedition."

A "coup," shorthand for "coup d'état," is broadly characterized by Merriam-Webster as a "sudden decisive exercise of force in politics," but particularly the "violent overthrow or alteration of an existing government by a small group."

Some have described the event as a "failed" or "attempted" coup, since apparent efforts to overturn the presidential election have been unsuccessful.

"We must call today's violence what it actually is: a failed attempt at a coup," then-New York Gov. Andrew Cuomo, a Democrat, wrote in a January 2021 statement.

Retired Army Lt. Col. Alexander Vindman, a key witness in the impeachment hearings against Trump, previously told CNN's Anderson Cooper he thought the events at the Capitol could be categorized as a "failed coup."