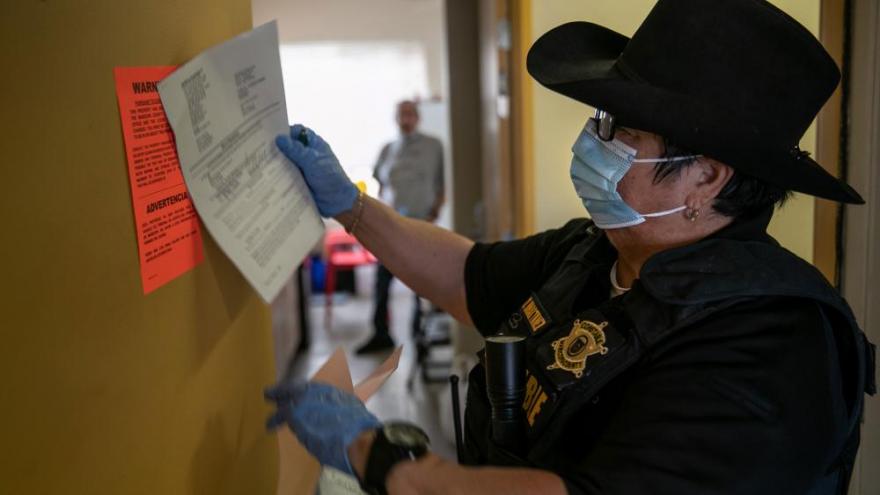 (CNN) -- Though Congress has passed a $900 billion Covid relief package, millions of Americans are in danger of losing important benefits just after the holidays if President Donald Trump continues to refuse to sign the bill.

The legislation would extend two pandemic unemployment programs and provide the jobless with a $300 weekly federal boost through mid-March. It would send direct payments of up $600 per person. It would reopen the Paycheck Protection Program so that some of the hardest-hit small businesses can apply for a second loan.

The package, which would be the second-largest relief deal after the $2 trillion CARES Act that Congress approved in March, also would extend eviction protection and enhance food stamp benefits.

Here's what's at risk if the bill isn't signed:

More than 12 million laid-off Americans could lose their unemployment benefits after this weekend if Trump doesn't sign the bill. And even if he does, they would likely suffer a break in payments of several weeks.

As part of the historic broadening of jobless benefits under the CARES Act, lawmakers created three programs to help out-of-work Americans. While the $600 payment enhancement lasted only through July, the other two expire just after Christmas.

The Pandemic Unemployment Assistance program allows independent contractors, the self-employed and gig workers to qualify for payments. It also opens up the program to those who can't work because of the pandemic, including if they or family members are ill or quarantining or if their children's schools are closed.

Some 9.3 million people filed claims under this program in early December, according to the latest Department of Labor data.

Also, Congress created the Pandemic Emergency Unemployment Compensation program, which provides an additional 13 weeks of federally paid benefits to those who run out of state payments, which typically last 26 weeks. Nearly 4.8 million long-term unemployed workers were in this program earlier this month, according to the Department of Labor.

If these two key programs lapse, payments would end for more than 12 million Americans, according to an analysis by The Century Foundation.

But even if Trump signs the legislation, it would still take a few weeks for state unemployment agencies to reprogram their computers to continue these two programs and to add the new $300 weekly federal boost, said Michele Evermore, senior policy analyst for the National Employment Law Project. They first would have to receive guidance from the Department of Labor with the new rules.

While the benefits would be retroactive, the jobless would be left without any payments until their states are ready.

A Centers for Disease Control and Prevention order that went into effect in September temporarily halted evictions through the end of the year. The order, which was spurred by an executive measure Trump signed over the summer, applies to renters who meet certain income requirements, have experienced significant losses of income and have made their best efforts to find rental assistance and pay their rent.

Since the order does not cancel or freeze rent, all of a tenant's back rent will be due January 1 if the moratorium is allowed to expire. Without rent relief or an extension of the protection, many struggling renters will again face eviction.

The relief package would extend the eviction protection to January 31 and provide $25 billion in rental assistance for those who lost their sources of income during the pandemic.

Congress provided $150 billion to state and local governments to help them cover coronavirus-related expenses. But states have to use those funds by December 30.

States are on track to expend all the funds by the deadline, according to a National Governors Association survey of 42 states and territories. Most of the money has been used for health-related expenses, economic relief, education and child care, and government expenses.

The package would give states and localities an additional year to spend the money.