Here's what happened with Canadian Covid-19 protests over the weekend 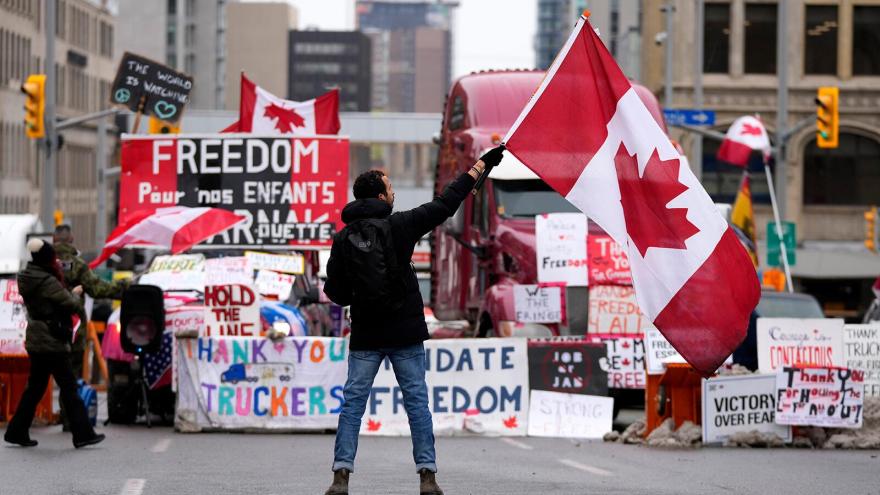 A protesters waves a flag Friday in Ottawa.

(CNN) -- Canadian authorities made headway over the weekend against protesting truck drivers and others who have been blocking US border crossings and occupying parts of the country's capital in opposition to Covid-19 rules.

The "Freedom Convoy" protests began in late January over Canada's new vaccine mandate for truckers entering the country from the United States. Other Canadians fed up with Covid-19 rules have joined to oppose mask mandates, gathering restrictions and other measures enacted to curb the spread of the coronavirus.

In Ottawa, demonstrators concentrated around government buildings have spilled out into residential areas, blocking streets and forcing businesses to close temporarily.

Other border crossings also have been blocked by semitrailers and even farm equipment. They include links between Manitoba and North Dakota, Alberta and Montana, and British Columbia and Washington state.

Here's what happened at major protest sites over the weekend:

On the day the blockage of the Ambassador Bridge began, Prime Minister Justin Trudeau told protesters: "It has to stop." Five days later -- on Friday evening -- a judge granted an injunction that allowed police to begin clearing the bridge area and end the blockade.

Demonstrators were ordered to clear the area by 7 p.m. Friday. Windsor police warned vehicles could be seized and forfeited in the case of conviction, and Ontario Premier Doug Ford warned of stiff fines and prison sentences.

"Let me be crystal clear: It is illegal and punishable to block and impede the movement of goods, people and services along critical infrastructure," Ford tweeted Sunday.

"Fines for noncompliance will be severe, with a maximum penalty of $100,000 and up to a year imprisonment."

Only a few dozen vehicles were at the foot of the bridge at sunrise Saturday, according to a CNN crew there. More left as police arrived to clear the area.

As many as 30 protesters were arrested for criminal mischief in Windsor near the bridge over the weekend, Windsor Police Chief Pamela Mizuno told reporters Sunday afternoon. Police seized five protester vehicles Sunday, and seven were towed Saturday, the chief said.

"Today, our national economic crisis at the Ambassador Bridge came to an end," Mayor Dilkens said in a statement Sunday. "Border crossings will reopen when it is safe to do so and I defer to police and border agencies to make that determination."

For more than two weeks, the truckers and their supporters have gridlocked the downtown area of the nation's capital. Businesses have had to shut down, and the noise of honking trucks permeated the air until a judge order that stopped last week.

Ontario Premier Doug Ford on Friday declared a state of emergency and promised "severe" consequences for the protesters.

"Your right to make a political statement does not outweigh the rights of the million people in Ottawa who live peacefully, free of harassment and chaos in their own homes," he said. "So let me be as clear as I can: There will be consequences for these actions, and they will be severe," Ford said.

"It represents a positive first step," although it isn't a long-term solution, Watson said in a statement to city councilors.

In a letter to the mayor, Tamara Lich, president of the protest organization Freedom Convoy 2022, said the organizers would be "working hard over the next 24 hours to get buy in from the truckers. We hope to start repositioning our trucks on Monday."

On Saturday, "a few vehicles" broke through a police barricade there, according to RCMP.

"While no injuries were reported as a result of the incident, this had the potential for harm to pedestrians and first responders. This kind of behavior will not be tolerated and is being investigated," RCMP Cpl. Vanessa Munn said in a statement.

Police screened cars and trucks Saturday at the border, and after protesters showed up, police blocked the route with police cars as protesters neared the border on foot, CNN affiliate CTV reported.

"Several officers were cut off from their colleagues by what Mounties described as a hostile mob," CTV reported. "Hundreds of protesters celebrated on foot near the border crossing, with traffic at a standstill through a massive area of south Surrey."

Meantime, the border crossing at Emerson in Manitoba and Pembina in North Dakota has been blocked since early Thursday by demonstrators, CNN affiliated CBC reported Sunday.