Here's what happened to George Floyd from every perspective and angle 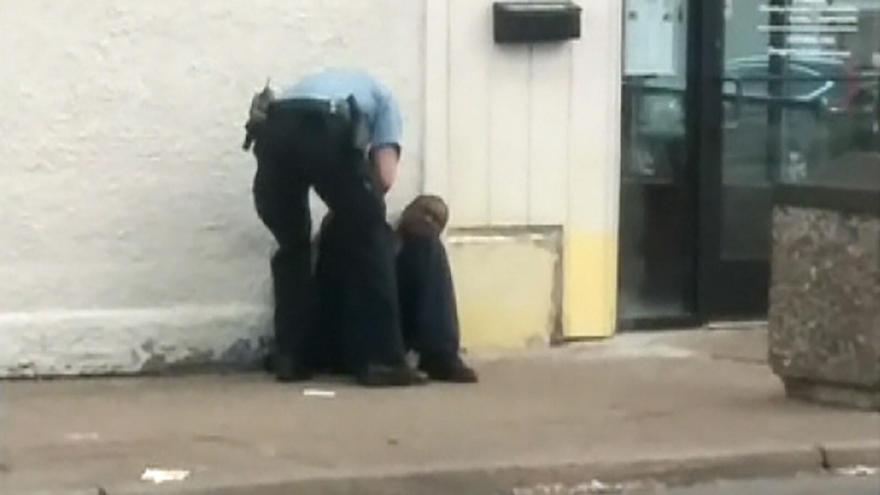 Cellphone footage from Christopher Belfrey showed police handcuff George Floyd and sit him down on the sidewalk on May 25, 2020.

(CNN) -- Prosecutors told jurors in the opening statements of Derek Chauvin's criminal trial to "believe your eyes." So far, the prosecution has given those eyes plenty to see.

In the first week of the trial, jurors have been shown surveillance footage inside and outside the Cup Foods store; bystander cellphone footage of George Floyd's initial arrest and of Chauvin kneeling on Floyd; and body camera footage from all four officers on scene -- including Chauvin's defensive, misleading statements after Floyd left in an ambulance.

Taken together, the videos provide a 360-degree view of Floyd's last day alive on May 25, 2020, in Minneapolis.

As we enter the second week of the trial, here's a look at each of the many perspectives and angles that help tell his story before, during and after his death under Chauvin's knee.

Previously unseen video presented in court Wednesday shows Floyd upright and chatty inside the Cup Foods corner store on May 25.

Christopher Martin, a 19-year-old Cup Foods cashier, testified that Floyd responded slowly to questions and appeared to be high when he came into the store that day. Surveillance video inside the store shows Floyd shuffling back and forth, fiddling with items in his pockets and casually interacting with other customers and employees.

"He seemed very friendly, approachable. He was talkative," Martin said. "He seemed to be having just an average Memorial Day, just living his life. But he did seem high."

Floyd then bought a pack of cigarettes with a $20 bill that Martin believed to be fake because of its blue color and texture. After examining the bill closely, Martin told his manager, who twice told Martin and other employees to go out to Floyd's vehicle and bring him back into the store to resolve the issue.

When Floyd did not do so, the manager told an employee to call police -- a fateful call that ultimately ended with Chauvin kneeling on Floyd's neck.

Martin said in court that he felt "disbelief and guilt" knowing that their interaction led to Floyd's death.

"If I would have just not taken the bill, this could have been avoided," he said.

The arrest of Floyd

Minneapolis Police were called to the scene, and officers Thomas Lane and J. Alexander Kueng went to Floyd's vehicle to investigate.

This sequence of events is captured in surveillance video from the Dragon Wok restaurant across the street, from the officers' body camera footage first released last August and from video taken by bystander Christopher Belfrey.

On the driver's side of the vehicle, Lane quickly pulled out his firearm, yanked Floyd out and put him in handcuffs. The two officers sat Floyd down on the sidewalk and later tried to move him into the back of their squad car -- which led to the struggle with police.

From the beginning of their interaction, Floyd looks frantic and scared. "Please don't shoot me," he says, crying during the arrest.

Belfrey, parked behind Floyd's vehicle, took cellphone video showing the officers pull Floyd from the car and handcuff him. Belfrey testified that he moved his car across the street to take more video of the arrest, but he ultimately decided to leave the area.

"I didn't know exactly what was going on; it's just I didn't want to be in the middle of so much commotion," Belfrey said.

The 9 minutes and 29 seconds of Chauvin kneeling on Floyd's neck was captured by several bystander videos, surveillance video from across the street and video from outside the Cup Foods store.

The searing bystander footage that first went viral last May was played for jurors during opening statements.

The teenager who took that video, Darnella Frazier, testified Tuesday that she came upon the scene while going to Cup Foods with her young cousin. She was identified only by her first name in court, but she has been internationally recognized for her decision to record and share the incident.

"I pulled out my phone, recording, capturing what I was seeing," she testified. "I heard George Floyd saying, 'I can't breathe, please, get off of me.' 'I can't breathe' and crying for his mom. He was in pain. It seemed like he knew it was over for him."

Several other bystanders took video of what they were seeing, too, including another high school student, an off-duty firefighter and an employee at the Speedway across the street.

"I knew there was something wrong, so I started recording," an 18-year-old high school student said.

"Memories of witnesses are never going to be as good as a video," the firefighter, Genevieve Hansen, said of her decision to start recording.

Finally, at the end of Wednesday's testimony, body camera footage from all four officers on scene -- Chauvin, Lane, Kueng and Tou Thao -- was played in court for the jury. The only body camera that shows very little is Chauvin's, as his fell under the squad car during the arrest.

Most of that body camera video has previously been released to the public, but its raw power for those in the court remained apparent. After a clip that included Floyd calling for his mother was played for Charles McMillian, a 61-year-old witness, he broke down in tears on the stand, leading to a short break.

Still, some of the body camera footage played in court had not previously been seen or heard and shows Chauvin's defensive and misleading statements in the immediate aftermath.

This includes video from Chauvin's body camera that captured audio of him explaining his perspective on why he knelt on Floyd for so long.

"That's one person's opinion," Chauvin responded to McMillian, who confronted Chauvin about his actions. "We had to control this guy because he's a sizable guy. It looks like he's probably on something."

Other footage captured audio of Chauvin offering his perspective in a phone call with his supervisor, Sgt. David Pleoger.

"I was just going to call and have you come out to our scene here," Chauvin said in the call. "We just had to hold a guy down. He was going crazy. He wouldn't ... he wouldn't go in the back of the squad --"

The video then ends. In the rest of the phone call, Chauvin said they had tried to put Floyd in the car, he became combative, and then after a struggle, he had a medical emergency, Pleoger testified. Chauvin did not mention that he used his knee on Floyd's neck and back, Pleoger said.

Pleoger then drove to the scene and advised the officers there to speak to witnesses. "We can try, but they're all pretty hostile," Chauvin responded, according to body camera video of the scene.

The comments that he "had to" hold down Floyd are contradicted by the many videos that show Chauvin kneeled on the handcuffed Floyd long after he had passed out. Prosecutors said he knelt on Floyd for 9 minutes and 29 seconds in all -- including 3 minutes and 51 seconds during which Floyd was non-responsive.