Here's what happened during the anthems at the NFL season opener 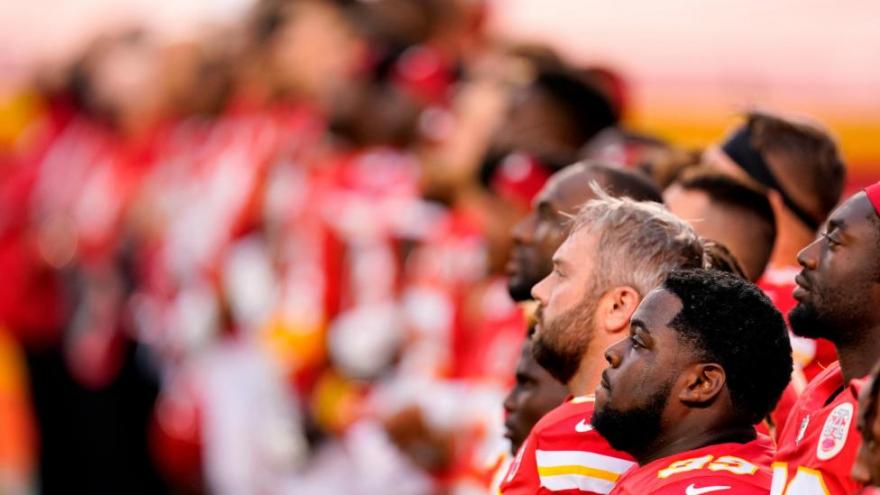 Kansas City Chiefs players stand for a presentation on social justice before an NFL football game against the Houston Texans Thursday, Sept. 10, 2020, in Kansas City, Mo.

(CNN) -- The 2020 NFL season kicked off Thursday evening with the Kansas City Chiefs playing the Houston Texans at Arrowhead Stadium.

With a few fans in the audience, the game honored two national anthems -- both the "Star-Spangled Banner" and "Lift Every Voice and Sing," commonly known as the Black national anthem.

Here's everything that happened before the game kicked off.

Texans did not take field for either anthem

The Houston Texans elected to not take the field for either the National Anthem or the Black national anthem.

"Lift Every Voice and Sing" played first, and the Texans left the field and returned when the anthem was over. The Chiefs, meanwhile, stood arm-and-arm on the field during the song.

Minutes later, when the National Anthem began, the Texans did the same thing -- leaving the field and returning once the song finished.

R&B duo Chloe x Halle performed the National Anthem ahead of the season opener. The two wore shirts with the faces of Breonna Taylor and George Floyd, raising their right fists for the final moment.

After both of the anthems, players and coaching staff from the Texans and the Chiefs joined arms in the center of the field for what they called a "Moment of Unity."

"Please join us in a moment of silence dedicated to the ongoing fight for equality in our country," the announcer at the stadium stated ahead of the moment.