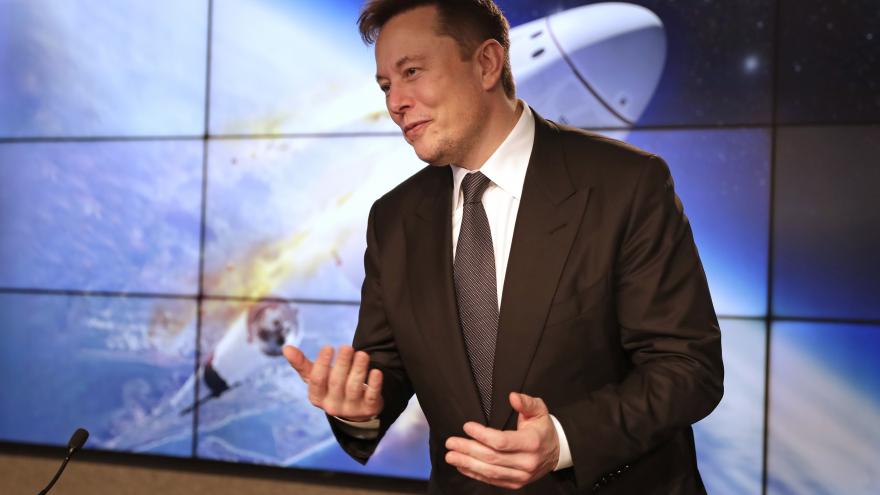 (CNN) -- What's Elon Musk doing with the billions he's collected in the past two months from selling shares in Tesla?

It seems possible, maybe even likely, that he's put at least some of the money into SpaceX, the other company of which he is CEO and primary shareholder.

Most of the proceeds from his $16.4 billion in Tesla stock sales since November 8 will go to pay an estimated $11 billion federal tax bill, leaving him with more than $5 billion to do whatever he sees fit.

Even if he ends up paying $2 billion in additional income tax to the state of California, where Tesla was based for most of the year when he was granted the options on which he will now owe taxes, Musk will be left with a nest egg of more than $3 billion. And his recent moves of both his own residence and Tesla's corporate headquarters to Texas, with its zero state income tax, makes it unlikely he'll have to pay the maximum possible tax to California.

Perhaps more telling: Some footnotes in the filing disclosing details of the sales, along with the timing of the last two equity infusions into SpaceX, raise the possibility that Musk is shifting some of his wealth from publicly-traded Tesla into shares of his privately-held company SpaceX.

Those trades are unique for Musk, the nation's highest profile CEO. It's the first time in the 12 years that Tesla has been public that he's held onto cash from the sale of that company's shares, rather than selling only enough stock to pay looming tax bills.

His timing is good, as the sales free up cash at a time when Tesla is doing very well in the market, becoming the sixth company in history to be worth $1 trillion, and lifting Musk himself to the status of the richest person on the planet. And it's being done at a time when his other high profile company, SpaceX, is out in the market raising hundreds of millions in cash to fund its ambitious goals. Those two facts, along with details disclosed in the various filings, certainly raise the possibility that he's pumping money into SpaceX.

Neither SpaceX nor Tesla responded to requests for comments about how Musk is using the proceeds of his stock sales.

Musk sold 10.3 million of the shares on the same days he exercised options to buy an additional 22.9 million shares of Tesla stock. The sales took place on 11 separate days spread out from November 8 through December 28.

Those options had been due to expire on August 13, 2022, so it made sense for him to use them to buy the shares. But once he did so, the value of the shares, less the modest exercise price, became taxable income.

Musk sold shares immediately after exercising the options, with the SEC filing noting that the transactions were made "solely to satisfy the reporting person's tax withholding obligations related to the exercise of stock options."

But not all of them.

The most recent sales included the notation that 219,000 shares that were sold on December 28 were "solely" to cover his tax bill. Another 715,000 shares he sold that same day, which netted Musk $776 million, went "partially to satisfy" his tax bill, according to the filing.

The next day, SpaceX made its own filing with the SEC, disclosing that it had raised $337.4 million in new equity investment from an undisclosed investor.

And this isn't the first time this year that a Musk sale of Tesla shares for purposes other than paying taxes was closely followed by SpaceX reporting a new infusion of equity investment.

From November 9 through 11, Musk sold 5.4 million shares, raising $5.8 billion. Those were shares he held in a trust, not shares he had just acquired as part of the exercise of options. And while his tax bill is likely much smaller on the sale of those shares, it's still substantial - about $1.2 billion in federal long-term capital gains taxes, leaving him with about $4.6 billion.

There's no indication in the filings as to why he completed those sales, which mark the first time he has sold shares that he has held for an extended period, rather than those he just acquired through the exercise of options.

It could be because he wanted to follow the outcome of a Twitter poll in which he asked followers if he should sell 10% of his stake in order to increase his taxable income. But it's equally possible that the motivation was to provide much needed cash for SpaceX.

On November 15, a few days after he made that unusual sale of shares from his trust, SpaceX disclosed it had raised $388 million in additional equity investments from an undisclosed investor.

That cash infusion arrived at an important time.

In an email sent to SpaceX staff just before Thanksgiving, Musk reportedly warned that the company was facing a cash crisis due to problems developing the Raptor rocket engines and Starship rockets needed to launch its Starlink satellites in 2022. Starlink is a constellation of satellites designed to provide high speed Internet service from orbit.

"We face a genuine risk of bankruptcy if we can't achieve a Starship flight rate of at least once every two weeks next year," according to the email reported by Space Explored and also by CNBC. Musk's email said that the company needed virtually all employees at work during the Thanksgiving holiday weekend to address the problems.

He also said the company planned to ramp up production of ground stations needed to connect Starlink customers to the Internet. He said it would be making "several million units per year," which he said will "consume massive capital."

In a tweet that followed reports of the email, Musk said that problem with the Starship rocket and its Raptor engines were "getting fixed." But in a December 29 tweet he said the first orbital test launch of the Starship rocket was delayed to the end of February due to the need to get approval for the unmanned flight from the FAA.

SpaceX and NASA also did not respond to questions from CNN Business about the email to SpaceX staff.

If SpaceX can fix the problems with its Starship rocket and Raptor engines and get Starlink up and running as planned, the value of SpaceX, already estimated to be worth more than $100 billion, could soar.The money that Musk and other investors have poured into it could lead to a financial bonanza once the company goes public.

SpaceX raised $1.2 billion in equity investments earlier this year, before these two most recent capital infusions.While the names of whomever purchased those additional shares are not public, the amounts of four separate infusions were disclosed in filings with the SEC.

It's not clear how much cash Musk had available to him to invest in SpaceX before he started selling his Tesla shares on November 8.

The overwhelming majority of his estimated $275 billion net worth comes from the nearly $250 billion value of Tesla shares and options he owns, as well as a chunk of money from his undisclosed stake in SpaceX. If Musk was going to make additional investments in SpaceX, selling Tesla shares was the most likely way for him to do so.

The reported email to SpaceX staff right before Thanksgiving is not the first time Musk discussed the financial challenges and cash drain involved in getting Starlink's internet service up and running.

"SpaceX needs to pass through a deep chasm of negative cash flow over the next year or so to make Starlink financially viable," he said in a tweet in February. "Every new satellite constellation in history has gone bankrupt. We hope to be the first that does not."