Here's what Biden has said about sending US troops to Ukraine 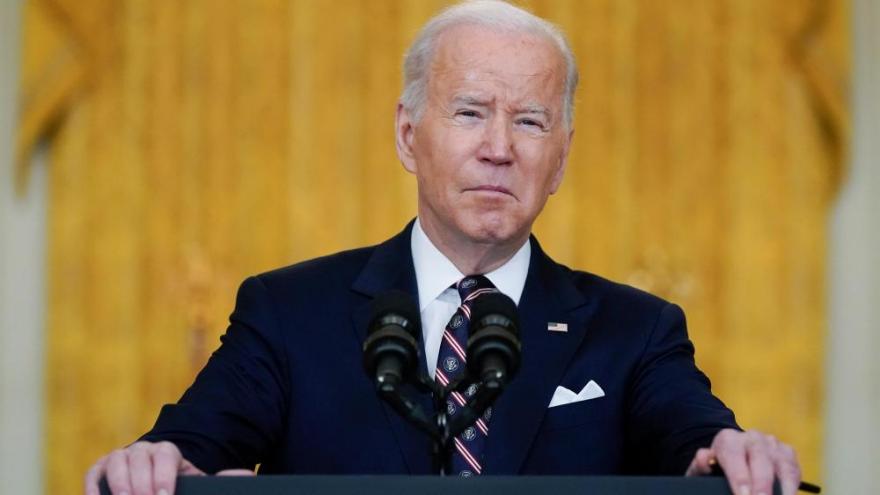 President Joe Biden speaks about Ukraine in the East Room of the White House, Feb. 22 in Washington. Biden has warned Americans they will have to pay a price for Russia's invasion of Ukraine.

By Zachary B. Wolf, CNN

(CNN) -- President Joe Biden has warned Americans they will have to pay a price for Russia's invasion of Ukraine.

Gas prices are likely to rise.

The post-World War II world order that has maintained relative peace in Europe is threatened.

But Biden has also been very clear on another point: US troops will not be sent to Ukraine to take part in the conflict.

When he announced the first tranche of sanctions against Russia for beginning its invasion on Tuesday, Biden similarly took great care to make clear the US was not being aggressive toward Russia.

"Let me be clear: These are totally defensive moves on our part. We have no intention of fighting Russia," Biden said.

Earlier in February, Biden told NBC News he would not consider any scenario that included sending US troops to evacuate Americans in Ukraine.

"There's not. That's a world war when Americans and Russia start shooting at one another," he said.

While Biden's clarification that US troops would not become offensively involved can help avoid a conflict between the US and Russia, critics pointed out it also made clear to Russian President Vladimir Putin that his forces would face fewer obstacles in their invasion.

US troops are in countries that border Ukraine

A major element of Putin's invasion is his fear that Ukraine could become part of the North Atlantic Treaty Organization, or NATO, which was formed after World War II to contain the Soviet Union and has expanded in recent decades to include former Soviet bloc countries.

Ukraine borders the NATO member countries of Poland, Slovakia, Hungary and Romania. If Russia threatened one of these countries, the US would be required by the agreement to defend them.

"We want to send an unmistakable message, though, that the United States, together with our Allies, will defend every inch of NATO territory and abide by the commitments we made to NATO," Biden said Tuesday.

He said something similar last week, in remarks from the White House, but he added clearly, "We also will not send troops in to fight in Ukraine, but we will continue to support the Ukrainian people."

While Biden has pledged not to send US troops to Ukraine, the US has sent additional troops and fighter jets to eastern European countries including Poland and Romania in recent weeks and on Thursday announced the deployment of 7,000 additional troops to Germany.

After Russia's invasion and attack on Ukraine, CNN is reporting that the Biden administration is considering moving more US forces already in Europe to countries farther east due to the massive Russian firepower so close to allies, according to a US official familiar with the matter.

"Today we activated NATO's defense stance that gives our military commanders more authority to move forces and to deploy forces when needed, and of course this can also be elements of the NATO response force," NATO Secretary General Jens Stoltenberg said Thursday. "We are ready, we are adjusting our posture but what we do is defensive, measured, and we don't seek confrontation. We want to prevent the conflict."

Opposition to major US involvement

Americans are wary of US intervention in the Russia-Ukraine conflict, according to polls taken in the runup to Russia's invasion.

In an AP-NORC poll, conducted last Friday through this Monday, just 26% of Americans believed the US should play a major role in the situation between Russia and Ukraine. About half, 52%, said it should play a minor role and another 20% that it should play no role at all.

One-third of Democrats (32%) and 22% of Republicans wanted the US to play a major role. Independents were most likely to say the US should play no role; 32% felt that way, compared with 22% among Republicans and 14% among Democrats.

In light of the polling, Biden and American officials would have to be very careful to engage the public before changing the administration's position on the commitment of US troops.