Here's how to watch the Tyson Fury vs. Dillian Whyte fight 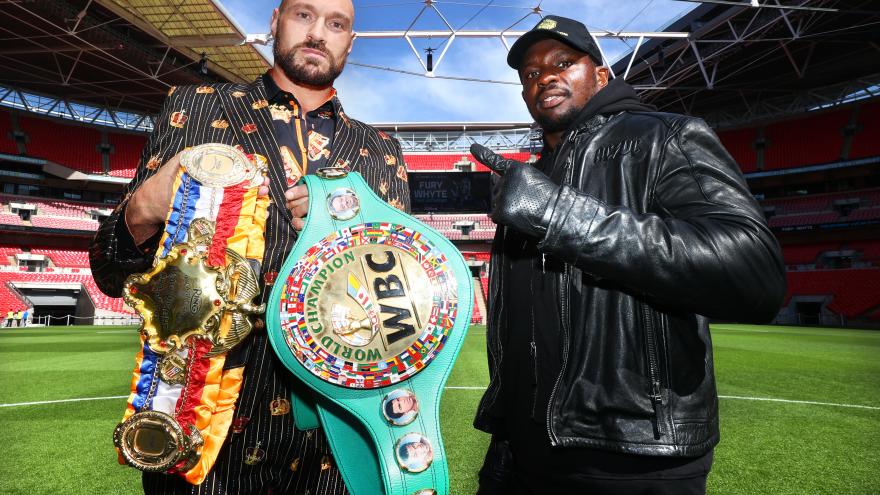 (CNN) -- On Saturday, nearly 100,000 spectators will gather at Wembley Stadium to watch British boxers Tyson Fury and Dillian Whyte face off in the biggest heavyweight battle of the 21st century. The fight will mark Fury's first fight in the United Kingdom in over four years as he defends his World Boxing Council (WBC) world heavyweight title against Whyte.

When is the fight?

The fight will take place on Saturday, April 23 at London's Wembley Stadium. Fury and Whyte will emerge for their ring walks at around 10 p.m. UK time or 5 p.m. ET.

Before their legendary faceoff, a few smaller bouts will take place, starting at around 7 p.m. BST or 2 p.m. ET. The undercard features Fury's half brother, Tommy Fury, facing off against Daniel Bocianski.

What to look out for

The fight will set the record for the largest attendance for a fight in the 21st century and the largest in Europe. But it will also mark significant turning points in both athletes' careers.

Fury, a two-time world heavyweight champion, is one of the world's most accomplished heavyweight boxers. But at 33, the legend is preparing to hang up his gloves -- making Saturday's match the last time fans may see Fury fight in the flesh.

"I know nobody believes me because they all think I'm after money or whatever else," Fury told Top Rank on Tuesday. "I'm walking away. I've got nothing to prove to nobody, I've done what I've had to do and that's it."

Fury is no stranger to his challenger: A decade ago, the two young fighters sparred in training camps. But Wednesday's news conference was the first time the two came face-to-face "in years," according to Fury.

In interviews, Whyte, 34, has made it clear that he is eager to take on the world title and to knock Fury off his pedestal.

"Tyson Fury is not this massive giant superstar everyone says he is, he's not," the London-born boxer told Sky Sports. "The fight at Wembley is sold out because it's Tyson Fury and Dillian Whyte, not Tyson Fury and someone else."

The 94,000 tickets for Saturday's fight sold out in just hours when they were released in March.