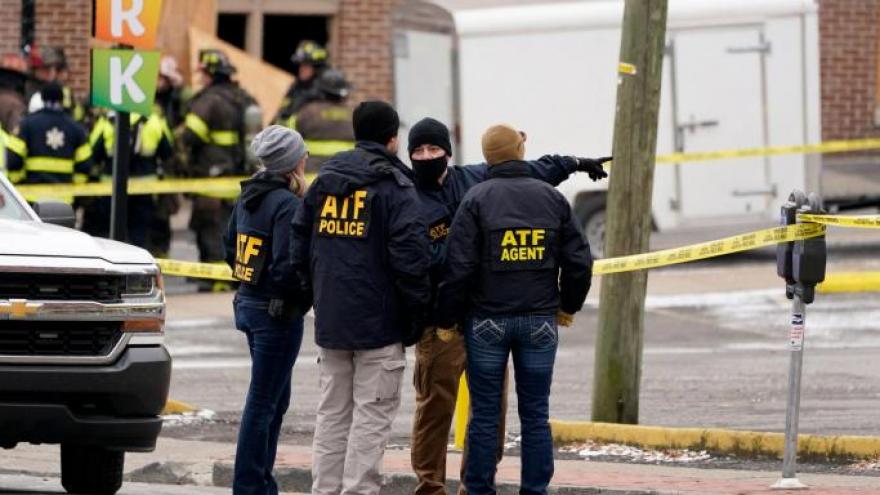 Emergency personnel work near the scene of an explosion in downtown Nashville, TN, Friday, Dec. 25.

(CNN) -- Multiple law enforcement agencies are on the ground in downtown Nashville after a Christmas morning explosion rocked the area, injuring at least three people and damaging several dozen buildings.

Plenty of questions remain unanswered about the explosion, from who was behind it to why it was carried it out.

Here's what law enforcement may be looking at as part of the investigation.

The search for physical evidence

Metro Nashville Police Department officers were responding to a call of shots fired early Friday morning when they discovered a white recreational vehicle on Second Avenue North that was broadcasting a warning message, announcing that it would explode.

Police went door-to-door, warning nearby residents of the threat, and the RV exploded as the bomb squad was responding to the scene.

Right now, the most important question to answer is who was behind the bombing, according to former FBI deputy director Andrew McCabe, a CNN senior law enforcement analyst.

"We need to know who put this thing there and detonated it," he said. "And it's only after you figure that out that you start to talk about things like motive."

In a news conference Saturday, US Attorney for the Middle District of Tennessee Don Cochran said the crime scene was "massive," describing it as a "giant jigsaw puzzle created by a bomb that throws pieces of evidence across multiple city blocks."

McCabe compared the Nashville explosion to the 2013 Boston Marathon bombing, which was a large scene spread over multiple blocks.

Essential pieces of evidence can be scattered across long distances, he said, so investigators will be dividing the Nashville scene into smaller areas to meticulously search every inch and recover every piece of evidence related to the explosive device or the RV.

That search will include scouring the rooftops of the surrounding buildings, McCabe said. A critical piece of evidence in the Boston bombing -- the lid of a pressure cooker used as an explosive device -- was found on the roof of a nearby building.

Juliette Kayyem, a former assistant secretary for the Department of Homeland Security, cited a photograph of the RV released by police. Investigators would presumably be able to use that image to figure out who owned or rented it and maybe where it had been last, she said.

"The physical evidence will lead to an understanding of who it is, or who they are, relatively quickly," said Kayyem, a CNN national security analyst.

Other pieces of evidence will include tissue found near the site of the explosion that investigators believe could be human remains and an image of the RV in question, released by MNPD on Friday.

Investigators will be looking at the type of explosive device used, which will leave an "investigatory footprint" as far as purchases made that would indicate where the suspect or suspects obtained materials used and when, Kayyem said.

Officials will be working to determine the type of explosive used, whether it was commercial or military, or something that's homemade, said CNN law enforcement analyst Peter Licata.

If it's the former, investigators will canvas places that manufacture or store those kinds of explosives, said Licata, a former FBI supervisory special agent and former lead bomb technician for the FBI's New York City field office.

But the latter is the most likely scenario, Licata said, because the majority of bombings in the US since the 1990s have been improvised or homemade devices, since commercial and military explosives are heavily regulated in the US.

"Then we go down a different path, and it's a wide path to go down," he said. Investigators will canvas retailers that sell precursor chemicals and websites like eBay or Craigslist.

It's important to note officials have not connected the Nashville explosion in any way to terrorism.

There were no known credible threats in the Nashville area that would have signaled an impending attack on or before Christmas, a federal law enforcement source told CNN. A second law enforcement source said federal authorities are not aware of any increased chatter nationally by known extremist groups that would indicate any credible plans for conducting attacks around the holidays.

Investigators looking into the explosion believe the blast was the result of a suicide bombing, according to two law enforcement sources with direct knowledge of the investigation.

FBI Special Agent in Charge Douglas Korneski said in a news conference Saturday that investigators were working to collect evidence to understand both who was responsible for the bombing and why they did it. That effort involves not just the agents on the ground, but also the bureau's behavioral analysis unit in Quantico, Virginia.

Kayyem stressed that it was important to be cautious about the motivation at this stage in the investigation, because "you don't want to focus on a particular thread or motivation, and then ignore where the real evidence could take you."

And yet the timing of the incident early Christmas morning and the warning message before the explosion appear to indicate that whoever was behind it was not attempting mass murder.

"What makes this so perplexing is the fact that it doesn't appear that the person or people who conspired to do this had any interest in causing any type of mass casualties," said James Gagliano, a retired FBI special agent who served on the Hostage Rescue Team, the bureau's elite counterterrorism tactical unit.

One witness described the warning as a "computerized message" with a female voice repeatedly saying, "Evacuate now," before it changed to a countdown, warning the RV would explode after 15 minutes.

Both Gagliano, also a CNN law enforcement analyst, and Kayyem raised the possibility the explosion was aimed at damaging infrastructure.

Among the questions investigators are trying to answer is whether an AT&T building that sustained damage in the blast was the target of the explosion, law enforcement sources tell CNN.

AT&T said Saturday it is working to restore both wired and wireless telecommunication outages caused by the explosion. The company said Friday one of its network hubs was damaged in the blast. CNN's parent company, WarnerMedia, is owned by AT&T.

Gagliano said the building is not well-marked as an AT&T facility. "You'd have to do some research to understand that it was actually a communications center," he said.

Nashville International Airport also said the explosion created telecommunications issues that prompted the Federal Aviation Administration to briefly halt flights from the airport. The ground stop was lifted after about an hour and "pilots never lost touch with air traffic control," according to the FAA.

"This seems to be something where a message was sent, and there was a purposeful methodology not to hurt people," Gagliano said.