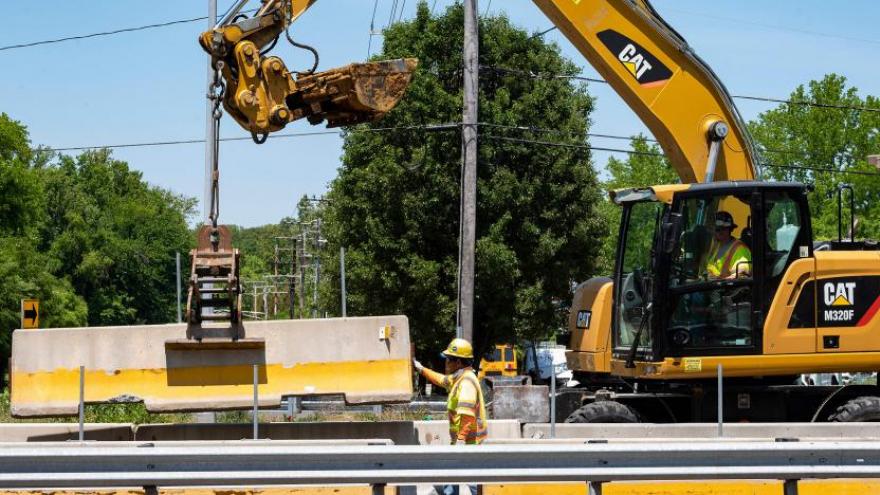 The White House and a group of Senate Republicans continued negotiating on an infrastructure package, more than two months after President Joe Biden first laid out his plan. Pictured are workers in Annapolis Maryland, on May 21.

(CNN) -- The White House and a group of Senate Republicans continued negotiating on an infrastructure package this week, more than two months after President Joe Biden first laid out his plan.

The two sides are a lot closer than when they started -- but remain billions of dollars apart. Biden met Wednesday with Republican Sen. Shelley Moore Capito of West Virginia, an exchange the White House described as "constructive and frank," and Republicans are expected to make another counteroffer on Friday.

With only a narrow majority in the Senate, Biden would need votes from key moderates in his party, like West Virginia Sen. Joe Manchin, to push through a deal with Democratic votes alone. Manchin has said he wants his party leaders to seriously engage with Republicans and agree on a bipartisan bill.

Here are some of the sticking points:

Biden's original plan would have cost an estimated $2.25 trillion. He offered this week to bring his price tag down to $1 trillion but wants to ensure it amounts to new funding -- not money redirected from spending already approved by Congress as Senate Republicans have been demanding.

Capito and her group of fellow Senate Republicans have increased their offer, proposing a $928 billion infrastructure package, with $257 billion in new spending. Their original plan totaled less than $600 billion.

How to pay for it

Republicans remain strongly opposed to Biden's plan to raise corporate taxes -- including raising the rate to 28% from the 21% level set in 2017 -- to pay for the new spending. Instead, the GOP group has proposed reallocating funds already approved by Congress and charging fees for using certain kinds of transportation, like electric vehicles.

But in an effort to bridge the gap, a proposal Biden put on the table in the meeting with Capito explicitly avoided the corporate tax rate issue, relying instead on significantly ramped-up tax enforcement and implementing a minimum corporate tax of 15%, which would target corporations that have utilized loopholes to avoid paying a significant share of taxes, CNN reported.

Funding for roads and bridges

Biden has reduced his original request of $159 billion in funding above current levels for roads, bridges and major infrastructure projects to just $120 billion in new investment. But that's still more than the $48 billion provided for in the latest Republican framework.

A $400 billion boost to caregiving

Biden wants to provide $400 billion to bolster caregiving for aging Americans and those with disabilities so that more of them could receive care at home. The investment would also improve the wages of home health workers. It made up the second largest piece of his original infrastructure proposal and was something he had called for on the campaign trail.

The Republican proposal left this investment out.

The GOP plan didn't include funding for workforce development and training, while Biden's proposal calls for a $100 billion investment in this area. The money would be used to create apprenticeships and provide training for people who have lost their jobs and want to gain new skills in high-demand sectors like clean energy, manufacturing and caregiving.

Biden's plan would provide $18 billion to modernize the Veterans Affairs hospitals, which are on average 47 years older than a private-sector hospital, according to the White House. The GOP plan did not include this funding.

This money was also excluded from the Republican framework. The White House called for a $5 billion investment in the remediation and redevelopment of former industrial and energy sites that now sit idle and are sources of blight and pollution.