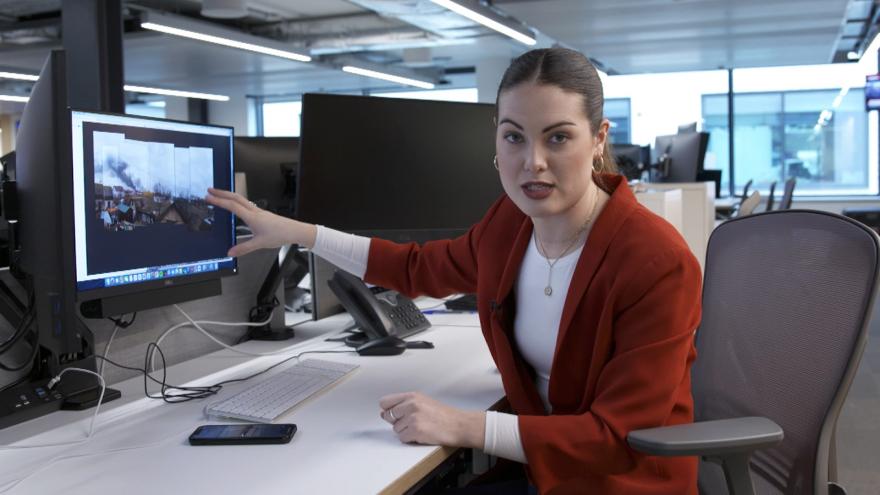 (CNN) -- Social media videos have played a critical role in CNN's coverage of Russia's invasion in Ukraine. But how does the network know they are accurate?

But it was not yet confirmed that Russian troops were that close to the Ukrainian capital. CNN had to verify that the footage was both recent and accurate through a process called geolocating.

Kate Polglase, a CNN investigative researcher, outlined the steps involved on "Reliable Sources" Sunday. The process begins by reverse image searching the video on Google Earth and a Russian search engine equivalent. The team zeroed in on the airport and surrounding area and began looking for possible locations that matched the images in the video.

"To geolocate it we did what's called a panorama," Polglase said. "So we created various screen grabs from the footage that looked significant."

Certain landmarks stood out in the screengrabs: A yellow building, a small rooftop structure and several white houses.

"We then went back to our Google Earth to find any situation, any location near the airport that match that description and luckily we found this," Polglase said pointing to her computer screen. "Here's the yellow structure."

Once verified, CNN was able to put the footage to use, and confirm the Russian army was mere kilometers from Kyiv. CNN's Matthew Chance, already on the ground in Ukraine, was sent to the location, creating an "iconic moment" where he was reporting from the airport as Russian soldiers streamed in.

CNN's chief media correspondent Brian Stelter said it's important to remember we are seeing the war through soda straws — one narrow perspective from one location.

CNN's chief national security correspondent Jim Sciutto noted those limitations apply to coverage from both sides of the conflict. Russia is opaque and deliberately lying, he said, but Ukraine is also in the midst of an information war, despite the outpouring of images.

"Propaganda is part of fighting a war," Sciutto said. "You want to keep up the spirit of the population and the troops."

"Making a judgment as to where this conflict stands on any given day requires that humility," Sciutto said, "because we don't know the whole picture."