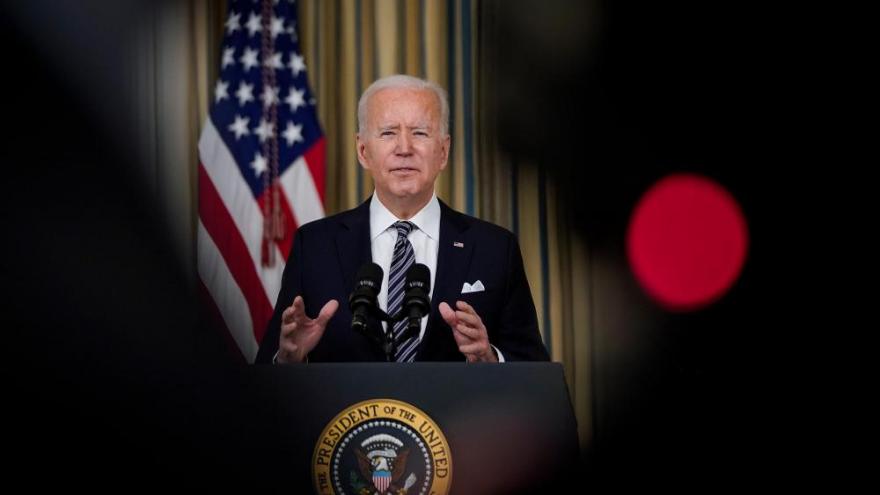 Now that he's signed the Democrats' $1.9 trillion Covid relief package, President Joe Biden is turning to the next items on his legislative agenda -- and laying the groundwork for raising taxes on wealthier Americans to pay for them.

(CNN) -- Now that he's signed the Democrats' $1.9 trillion Covid relief package, President Joe Biden is turning to the next items on his legislative agenda -- and laying the groundwork for raising taxes on wealthier Americans to pay for them.

He is expected to outline the next step of his economic agenda during a joint session to Congress on April 28.

Biden has doubled down on vows he made as a candidate, saying that those earning more than $400,000 "will see a small to significant tax increase." However, he's pledged that those under that threshold "won't see one single penny in additional federal tax" -- and he is already working to make permanent several major, albeit temporary, tax breaks for low-income and middle class Americans, that were part of the stimulus. These include expansions of the child tax credit and earned income tax credit, as well as more generous Affordable Care Act premium subsidies.

Much of Biden's plan rests on reversing the Republicans' 2017 tax cuts, which were more heavily weighted to those at the upper end of the income ladder, though many key provisions will expire after 2025.

In March, White House press secretary Jen Psaki said Biden believes that "those at the top are not doing their part" and "obviously that corporations could be paying higher taxes."

Biden has not issued a formal tax proposal since taking office, though it's expected he will unveil measures soon to help fund his plans for infrastructure, clean energy and other recovery efforts.

During his quest for the White House last year, he released a plan that would increase federal revenues by $2.1 trillion over a decade, according to a non-partisan Tax Policy Center analysis from November.

While his proposal will likely be altered by Congress, it is expected to meet with a warm reception on Democratic-controlled Capitol Hill. Already, more progressive lawmakers, including Sens. Elizabeth Warren of Massachusetts and Bernie Sanders of Vermont, are re-floating the controversial wealth tax that they proposed in their recent Democratic presidential primary campaigns.

Here's what Biden proposed on the campaign trail:

Biden called for returning the top marginal rate to 39.6% -- noting that was the rate when President George W. Bush, a Republican, was in office. The 2017 tax cut reduced that rate to 37%.

Multiple sources familiar with the discussions underway confirmed to CNN that the plan calls for raising the top marginal income tax rate to 39.6% for households with $400,000 or more in income.

White House officials have stressed that the details of the plan haven't been finalized and could change before the joint address. Biden is continuing to hold meetings with policy aides to finalize the details.

Biden said in a March interview with ABC News that this increase would raise $230 billion, which is about double the Tax Policy Center's estimate for lifting the rate on those earning about $400,000 a year. Such a move would capture some people whose top rate is currently 35% and all of those in the 37% bracket, said Howard Gleckman, senior fellow at the center.

His proposal would also make two changes that would limit the value of itemized deductions for taxpayers above that income threshold, which would generate another roughly $275 billion, the center found.

The top 1% of earners, for example, are estimated to see an average 15.6% reduction in after-tax income in 2022, the center found.

Those earning more than $1 million annually would have to pay higher taxes on capital gains, which typically make up the largest share of income for the wealthy, under Biden's campaign proposal.

The long-term capital gains of these taxpayers would be subject to the top marginal rate for wages and salaries -- currently 37%, but rising to 39.6% under his broader plan.

This would tax those gains as ordinary income, nearly doubling the rate at which they are currently taxed and erasing the distinction with short-term capital gains, which are already taxed as ordinary income for investments held less than a year. Sources familiar with the discussion confirmed that this provision is still in the plan.

Whether to tax capital gains at the same rate as income has been a long-standing battle on Capitol Hill, with many Democrats favoring it.

Right now, investments held for at least one year are subject to a top federal capital gains rate of 20%. Individuals earning $200,000 a year and married couples making $250,000 a year pay an additional 3.8% tax on their capital gains to help fund the Affordable Care Act.

Currently, heirs of wealthy Americans enjoy a major tax break. Assets that pass directly to them receive a "step-up" in their cost basis, meaning they are valued as of the date of death. This can minimize the tax levy on the heirs when they eventually sell the assets. And it means the gains accrued during the lifetime of the parent who died are never taxed.

Biden would require estates to pay taxes on the unrealized gains on these assets.

This measure, along with boosting the rate on capital gains taxes, would raise $370 billion over 10 years, according to the Tax Policy Center.

Hiking payroll taxes on the wealthy

Workers and their employers each pay 6.2% of wages to fund Social Security. Biden's provision would create a donut hole, with earnings below the cap and above the new threshold subject to the payroll tax.

This would raise $740 billion over a decade.

Biden would rewind estate tax policy back to 2009, when the federal exemption was $3.5 million per person and the rate was 45%.

Prior tax law changes had lifted the exclusion to $5.5 million and reduced the rate to 40% by 2017. The Republicans' tax cuts greatly increased the exemption, which now stands at $11.7 million per person for 2021, and kept the 40% rate.

The estate tax changes would bring in an additional $218 billion in revenue, according to the Tax Policy Center.

Biden would reverse part of the 2017 tax cuts to corporate income tax rate. He would hike it to 28%, up from the current 21%, but not as high as the 35% top rate that existed before the Republican tax breaks.

His campaign platform also called for imposing a more aggressive minimum tax on multinational corporations and taxing book income reported to shareholders, not the income reported to the Internal Revenue Service, among other measures.

These business tax hikes make up the largest component of Biden's campaign proposal, raising about $1.3 trillion in revenues over a decade.

During the ABC News interview, Biden reiterated his pledge to not raise taxes on anyone making less than $400,000 a year -- a claim he made repeatedly during his campaign. That would cover about 90% of taxpayers.

An analysis of Biden's campaign proposals by the Tax Policy Center, as well as models from the Committee for a Responsible Federal Budget and the Penn Wharton Budget Model, found that to be true. They show that families earning less than $400,000 a year won't see a direct increase in federal taxes.

But the story is a little different when considering indirect taxes, like the corporate tax hike Biden is proposing. Economists assume that workers eventually bear some of the cost of those taxes. They won't see a higher income tax rate, but their after tax-wages could eventually be lower.