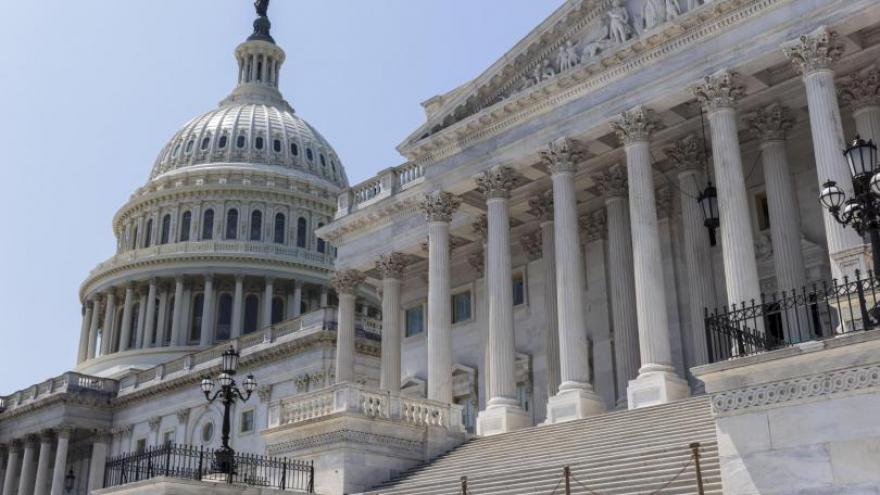 On Saturday, right-wing demonstrators plan to protest the ongoing criminal cases tied to individuals charged after the deadly Capitol riot on January 6.

(CNN) -- The September 18 right-wing rally in Washington, DC, had brought a new wave of concern about more potential violence on Capitol Hill as law enforcement prepared for a variety of scenarios. It ultimately took place with a crowd of a few hundred and without any major security incidents.

US Capitol Police tweeted that there were a total of four arrests Saturday. The charges ranged from a probation violation to weapons-related charges. Police in riot gear also stepped in at one point to separate rallygoers from counter-protesters, and they were separated without incident, according to USCP.

But overall, the event was peaceful. Capitol Police said about 400 to 500 people were in the protest area, including journalists. Organizers had received a permit for 700 people and claimed some of their supporters didn't show up because they were afraid.

There was a massive police presence around the protest and around the Capitol, with law enforcement taking extraordinary steps to make sure there wasn't a repeat of the January 6 insurrection. While there was little evidence going into Saturday that anything of that proportion was likely, there were concerns about extremist groups and clashes with counter-protesters.

US Capitol Police Chief Tom Manger told reporters Friday that the department had a "strong plan in place to ensure" the event remained "peaceful, and that if violence does occur that we can stop it as quickly as possible."

Given the rally took place on a Saturday, when both chambers of Congress were on recess, far fewer lawmakers or staff were in the area. During the morning, dozens of police officers congregated together in different spots in the Capitol, which appeared empty except for reporters and the police officers.

CNN spotted officers from all different jurisdictions, including from Baltimore, DC Metro and Capitol Police.

Here's what else you need to know:

What was the rally for?

The "Justice for J6" rally aimed to support insurrectionists charged in the deadly January 6 Capitol riot. It started, as scheduled, at noon ET on Saturday.

The event was billed in support of nonviolent "political prisoners" who were charged with crimes tied to the January 6 attack; of the more than 600 Capitol riot defendants, only a handful are in jail, according to CNN's analysis of court records.

The vast majority of the 600-plus defendants were released shortly after their arrest. Only a few dozen were ordered to stay in jail before trial, and most of them were charged with violent crimes. For the handful of nonviolent rioters who are being detained, federal judges concluded that they were too dangerous to release, saying they might participate in future political violence.

Who were the organizers?

The rally was planned by "Look Ahead America," a nonprofit led by former Trump campaign staffer Matt Braynard, who previously promoted the "big lie" that the 2020 election was fraudulent. The group is "dedicated to standing up for patriotic Americans who have been forgotten by our government," according to its website.

In interviews with CNN prior to the event, Braynard insisted it would be peaceful and that "no one is going to be bringing a weapon who's going to be part of our crowd." Braynard had also encouraged attendees not to wear any candidate or election-related gear.

"This is about the many people who were there that day, who have not been charged with violence ... and the disparate treatment they've received," Braynard said.

Organizers repeatedly said they condemned the violence that occurred on January 6. Other speakers pushed debunked pro-Trump narratives about the insurrection.

Before the event, at least one Proud Boys leader had encouraged followers from across the country to show up, though others online had discouraged attendance and warned it might be a false flag operation designed to trap supporters.

Meanwhile, "White Lives Matter, " which does not have a DC chapter, had been advertising global demonstrations for September 18 and had been supportive of the January 6 insurrectionists online.

Who was expected to attend?

Around 500 people indicated they had planned to attend, though an internal Capitol Police memo reviewed by CNN had noted that past recent events organized by Look Ahead America had significantly lower attendance than expected.

No sitting member of Congress was scheduled to appear at the rally. Speakers included two Republican congressional candidates -- Mike Collins, who's running for a House seat in Georgia, and Joe Kent, who is running to unseat Rep. Jaime Herrera Beutler of Washington state, a Republican who voted to impeach Trump.

What security steps were in place?

Officials took steps to ensure there would be a significant security presence and additional help would be on standby -- in contrast to what happened in the lead-up to January 6.

The US Capitol Police reinstalled new temporary fencing Wednesday night around the Capitol complex ahead of the rally.

Fencing had been erected around the Capitol following the January 6 riot but was eventually pared back and removed over the summer.

Additionally, Capitol Police said in a statement Monday that its board had "issued an emergency declaration, which will go into effect about the time of the demonstration and allow the Department to deputize outside law enforcement officers as United States Capitol Police Special Officers."

"We want to reassure everyone these are temporary measures to ensure everyone's safety," Manger said in the statement. "We are extremely grateful for the support we continue to receive from the local community and our Congressional stakeholders as we carry out our critical mission."

TSA also ramped up security at Ronald Reagan Washington National Airport, telling travelers to expect to see more security officers and K-9s at the airport over the weekend.