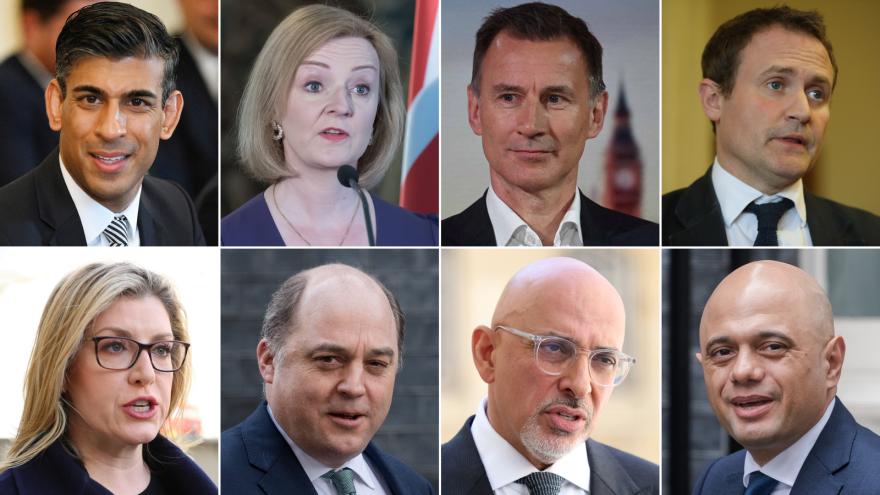 (CNN) -- As crisis after crisis has engulfed Boris Johnson in recent months, so rivals of Britain's beleaguered prime minister have been plotting behind closed doors to replace him.

In the wake of the so-called partygate scandal over illegal gatherings held at Downing Street in defiance of coronavirus lockdowns, several senior members of Johnson's cabinet began quietly preparing for a future leadership contest, courting influential members of parliament and dining with donors who could fund their campaigns.

Johnson survived a vote of confidence on June 6, but more than 40% of Conservative lawmakers declared that they had lost confidence in his ability to govern. And, in the intervening month, those who most wanted to see his downfall have been jockeying for his job.

On Tuesday, two high profile lawmakers long expected to throw their hats into the ring -- Health Secretary Sajid Javid and Chancellor of the Exchequer Rishi Sunak -- resigned over the botched handling of the resignation of Johnson's former deputy chief whip in a sexual misconduct scandal.

A dramatic cascade of nearly 60 resignations by lawmakers and government officials followed, ultimately forcing Johnson to begrudgingly announce on Thursday that he would step down.

Now, with the government in tatters, bookmakers and much of Britain are speculating about his likely successor. Any candidates who run for the leadership will go through rounds of voting by Conservative lawmakers until only two remain -- at which point Conservative Party members nationwide will vote. The winner will be the new party leader -- and prime minister.

Here's a look at the possible contenders.

The former chancellor formally announced he was standing to succeed Johnson on Friday in a slick campaign video, which began with the story of his Indian parents, who both emigrated to the UK from East Africa. "It was Britain, our country, that gave them and millions like them the chance of a better future," he said. "I want to lead this country in the right direction."

Sunak was Johnson's presumed successor for several months after he won praise for overseeing Britain's initial financial response to the Covid-19 pandemic. But he has suffered several of his own scandals while in government.

His stock sank earlier this year after revelations that he broke Covid regulations to attend the prime minister's birthday party on June 19, 2020, which he later apologized for "unreservedly."

His financial and legal affairs came under scrutiny this spring following reports his wife had non-domicile status in the UK -- meaning she was not liable to pay tax on overseas income -- and that he held a US green card while serving as minister.

His popularity has also taken a beating in recent weeks as Britain has sufferedthe worst cost-of-living crisis in decades. Sunak has struggled to keep down spiraling inflation and has been criticized by opposition parties for what they call a slow and inadequate series of financial measures. Among the economic woes facing Britons after Sunak's time as the UK's chief financial minister: real wages dropping to their lowest levels in more than 21 years and inflation hitting a 40-year high of 9.1% in May.

But he is still among the bookmakers' odds-on favorites to take Johnson's job.

"This week again, we have reason to question the truth and integrity of what we've all been told. At some point, we have to conclude that enough is enough," the former health secretary told the House of Commons on Wednesday, referring to the appointment of and allegations linked to former deputy chief whip Chris Pincher.

Something is "fundamentally wrong" with government, he added, and "the problem starts at the top."

Javid's resignation speech sounded very much like a pitch for prime minister, outlining how to reshape the party for future generations.He launched his bid to replace Johnson just a few days later.

Posting on Twitter Sunday, Javid said: "The next Conservative leader needs to be able to unite the party and win an election. The next Prime Minister needs integrity, experience, and a tax-cutting plan for economic growth. That's why I'm standing."

Those who support Javid's candidacy hope that he will be credited for triggering Johnson's ultimate ouster, having been the first cabinet minister to resign -- though Sunak followed him minutes later.

The MP has twice run for party leadership in the past -- in 2016, after the Brexit referendum, and in 2019, when Johnson was ultimately elected.

The foreign secretary, who has made her leadership ambitions known in recent years, could now be in pole position. Liz Truss voted Remain in 2016, but has since become one of the loudest Euroskeptic voices in the government, which many chalk up to her desire for the top job.

She has a formidable and dedicated team around her -- some of whom previously worked in Number 10 -- which has been producing slick videos and photos of her looking thoroughly statesmanlike. She has apparently attempted to channel former Prime Minister Margaret Thatcher, wearing a headscarf while driving a tank, and her role in fronting the response to Russia's invasion of Ukraine has also heightened her public profile.

Truss is popular among Conservative members, who would pick the eventual winner of a contest. But Johnson's downfall could simultaneously tarnish anyone in his cabinet, meaning Conservative voters could turn to a backbencher to take the mantle.

Last month, a source working in the Foreign Office told CNN that Truss had been in "endless meetings with MPs," and that "it's been insinuated that she's seeing what her support base is, should the time come." Truss's office denied that any covert leadership bid was coming.

The trade minister, one of the bookmakers' favorites to replace Johnson, announced her bid for the leadership on Sunday. A poll of party members published July 4 by website Conservative Home put her as the second favorite choice, behind the current defense secretary Ben Wallace.

Penny Mordaunt first entered parliament in 2010 and later joined the cabinet under Theresa May, serving as international development and defense secretary.

After last month's confidence vote, Mordaunt declined to comment on whether she backed Johnson, raising eyebrows among Westminster observers when she said: "I didn't choose this prime minister."

Announcing her interest in the top job, she said the party "leadership needs to become a little less about the leader and a lot more about the ship."

Mordaunt, who in 2019 became the first woman to serve as defense minister, invoked Thatcher in her statement, saying the former Conservative leader "was remarkable for not just what she did but the speed she did it."

A former British military officer who chairs the Foreign Affairs Committee, Tom Tugendhat has been one of Johnson's most robust critics and has called for the Conservative Party to drop its focus on "divisive politics."

Launching his leadership bid on Thursday in The Telegraph newspaper, Tugendhat wrote: "I have served before -- in the military, and now in Parliament. Now I hope to answer the call once again as prime minister. It's time for a clean start. It's time for renewal."

He outlined his vision for tackling the cost of living crisis, reducing taxes and investing in neglected regions of the UK.

Despite not having any cabinet or shadow cabinet experience, Tugendhat has impressed colleagues with his oratory skills and seriousness, most notably when he spoke about the fall of Afghanistan. He entered parliament in 2015 after serving in the Iraq and Afghanistan wars.

Some key centrist Conservatives have already been throwing their support behind the relative wildcard, but some worry that his experience is too focused on foreign affairs.

Less than two days after he was appointed to chancellor, replacing Sunak, Nadhim Zahawi publicly called on Johnson to resign. "Do the right thing and go now," he said in a statement on Twitter accompanying a letter to the Prime Minister.

Until his promotion, Zahawi, who joined the cabinet less than a year ago, was considered an unlikely choice as the next prime minister. But his rise under Johnson has been rapid, making his mark with early success as vaccines minister amid the coronavirus pandemic and then as education secretary.

Despite voting to leave the European Union in 2016, Zahawi is widely admired among the moderates in the party. Crucially, as one Conservative source put it, "he's not been in government long enough to have any obvious defects and, despite supporting Boris even after the confidence vote, is not too tainted by association."

Zahawi was born in Iraq to Kurdish parents and came to the UK at 9 years old, when his family fled Saddam Hussein's regime. He is believed to be one of the richest politicians in the House of Commons, and helped found the polling company YouGov.

A former health and foreign secretary, Jeremy Hunt lost the 2019 leadership vote to Johnson. He has since styled himself as an antidote to Johnson and is without question the highest profile contender on the moderate, ex-Remain side of the party.

Hunt announced his bid to become the next Tory leader in an interview with British newspaper The Sunday Telegraph, pitching himself as "the only major candidate who has not served in Boris Johnson's government."

In a statement on Twitter ahead of the confidence vote in June, Hunt said: "Anyone who believes our country is stronger, fairer & more prosperous when led by Conservatives should reflect that the consequence of not changing will be to hand the country to others who do not share those values. Today's decision is change or lose. I will be voting for change."

Tellingly, Hunt's statement focused mainly on the Conservatives' chances of electoral success under Johnson, rather than his policies or the partygate scandal -- a decision that could be read as a pitch to the Tory MPs and members who would decide a leadership election. However, he comes with baggage, and sources from the opposition Labour Party have told CNN they are already writing attack lines.

"It can't be Jeremy. Labour can say he was running healthcare for six years and failed to prepare for a pandemic. They can say when he was culture secretary he chummed up to the Murdochs during the phone hacking scandal. He will get crushed," a senior Conservative source told CNN.

Transport Secretary Grant Shapps launched his bid for the top job this weekend. In a post on Twitter on Sunday, he described himself as a "problem solver, with a proven record of delivery."

The MP for Welwyn Hatfield was elected in 2005 and has held several ministerial posts. He is also a former co-chair of the Conservative party.

The MP for Saffron Walden and former equalities minister launched her leadership bid in an op-ed published by the Times of London newspaper, saying she wants a "strong but limited government focused on the essentials."

She resigned from the government on Wednesday citing "issues" that had "come to light" and the way they had been handled.

"I'm putting myself forward in this leadership election because I want to tell the truth. It's the truth that will set us free," she wrote Saturday. Badenoch, who voted in favor of Brexit in 2016, added she would run on a "smart and nimble centre-right vision."

Last week, the attorney general called for Johnson to quit and said that she would join a leadership race to replace him, telling ITV "it would be the greatest honor."

Launching her bid a few days later, Suella Braverman wrote in The Daily Telegraph: "I saw Brexit as the most important political decision of my life. My views are not triangulated or calibrated. They are as much a part of me as my DNA. I now realise that I cannot rely on others to take Conservatism forward."

Braverman was elected as MP for Fareham in 2015.