Here are the world leaders who congratulated Joe Biden 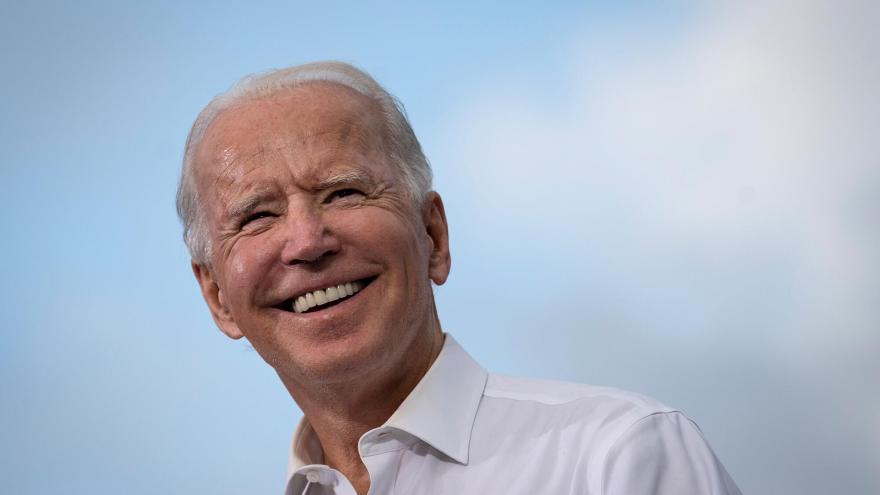 Leaders around the world have offered their congratulations to President-elect Joe Biden even as President Donald Trump refuses to concede his election loss.

(CNN) -- Leaders around the world have offered their congratulations to President-elect Joe Biden even as President Donald Trump refuses to concede his election loss.

The calls, from some of the US' most consequential allies, signal a repudiation of Trump's attempt to cling to power, and the incoming Democratic president has held a number of phone calls with key US allies in the days since CNN projected his victory.

These are some of the leaders to whom Biden has spoken or who have offered their congratulations on his victory:

The Canadian Prime Minister spoke with Biden on Monday and offered his congratulations again, after initially congratulating the US President-elect on Saturday.

The two discussed the coronavirus pandemic, climate change, NATO, trade and racial justice, according to a tweet from Trudeau and a readout from Biden's team.

Under Trump, the US and Canada have at times had a rocky relationship, particularly on the issue of trade. In August, Canada slapped retaliatory tariffs on US goods after the US reimposed the tariffs on Canadian aluminum that had initially been lifted.

Biden and the British Prime Minister, who is seen as a close ally of Trump, spoke on Tuesday.

"They discussed the close and longstanding relationship between our countries and committed to building on this partnership in the years ahead, in areas such as trade and security -- including through NATO," a readout from a Downing Street spokesperson said. "The Prime Minister and President-elect also looked forward to working closely together on their shared priorities, from tackling climate change, to promoting democracy, and building back better from the coronavirus pandemic."

On Wednesday, Johnson said it was "extremely exciting" to discuss an upcoming climate change summit. Trump has largely dismissed the gravity of the global climate crisis and withdrew the US from the Paris climate accord.

The French leader called to offer Biden congratulations on Tuesday and used the conversation to touch on a wide variety of issues that he looks forward to cooperating on -- perhaps a pointed reference to the Trump administration's disdain for its traditional alliances. Macron pointed to climate change, health, the defense of fundamental rights and the fight against terrorism, among others.

Macron initially invested a lot of time and energy trying to build strong ties to Trump, but the US leader's contempt for NATO, his tariffs on European products, and his withdrawal from the Iran nuclear pact and the climate agreement fed into Macron's conclusion, shared with the Economist magazine in 2019, that Europe couldn't rely on the US for security and was turning its back on Europe.

Biden and the German Chancellor spoke by phone Tuesday. "The President-elect expressed gratitude to Chancellor Merkel for her congratulations, praised her leadership, and noted that he looked forward to strengthening relations between the United States and Germany and revitalizing the trans-Atlantic relationship, including through NATO and the EU," according to a readout from Biden's team. "The President-elect noted his interest in working closely with Chancellor Merkel on common interests and challenges, including containing COVID-19; addressing the climate crisis, and working toward a sustainable global economic recovery. He also welcomed the opportunity to cooperate on a shared agenda with the EU."

Merkel and Trump have had a rocky relationship. CNN's Carl Bernstein reported that Trump demeaned Merkel in phone calls, even calling her "stupid" and "accused her of being in the pocket of the Russians." Merkel countered his attacks with facts, Bernstein reported.

The Irish Taoiseach, or Prime Minister, spoke with Biden on Tuesday and tweeted about their "warm and engaging" call. Martin clearly signaled Ireland's dismissal of Trump's attempts to contest the election results, describing Biden's win as "an outstanding personal mandate."

Trump's relationship with Ireland was seen as fraught. His support for Brexit led many in Ireland to worry that he didn't appreciate how it could destabilize the Good Friday peace agreement, analysts said. Trump's delay in appointing an ambassador to Dublin was another issue; his ambassador, Edward Crawford, formally started the job in July 2019, two years after the previous ambassador left.

The Turkish President, with whom Trump had bonded and spoke to frequently, congratulated Biden in a message released Tuesday.

"I congratulate you on your election success and express my sincere wishes for the peace and prosperity of the people of the United States of America," Erdogan said in the message.

"I reiterate our determination to work closely with the US administration and believe that the strong cooperation and alliance between our countries will continue to contribute to world peace in the future as it has until today," Erdogan said.

The US-Turkish relationship is deeply rooted and strategic in nature, Erdogan said.

The Saudi King sent a congratulatory cable to Biden on his victory, the Saudi Embassy in Washington said in a statement on Monday morning.

"In his cable, the King expressed his sincere congratulations and best wishes of success to Mr. Biden and to the friendly people of the United States of America steady progress and prosperity," the embassy statement said. "The Custodian of the Two Holy Mosques praised the historical deep-rooted relations between the two friendly countries, adding that both countries are keen to develop and enhance these relations in all fields."

The Trump administration fostered and maintained close ties with the Saudis despite deep bipartisan criticism of the Kingdom's involvement, which they deny, in the murder of US-based journalist Jamal Khashoggi as well as their involvement in Yemen's bloody civil war.

Australia's Prime Minister congratulated Biden in a call Wednesday night, according to Morrison and a readout from Biden's team.

"There are no greater friends and no greater allies than Australia and the US," Morrison tweeted. "I look forward to strengthening even further our deep and enduring alliance, and to working with him closely as we face the world's many challenges together."

Biden and the South Korean President spoke on Wednesday evening, according to a readout from Biden's team and a tweet from Moon.

"The President-elect praised President Moon's strong leadership on COVID-19, noting his commitment to cooperate on addressing the pandemic, building global health security, and stimulating global economic recovery," the readout said. "He observed that he looks forward to working closely with President Moon on other shared challenges, from North Korea to climate change."

Moon tweeted: "I just spoke to @JoeBiden and congratulated him on his election. We reaffirmed our firm commitment to a robust ROK-US alliance and peaceful and prosperous Korean Peninsula."

"The President-elect thanked Prime Minister Suga for his congratulations and complimented him on his steady leadership amidst a governing transition for Japan," said a readout from Biden's team.

"The President-elect underscored his deep commitment to the defense of Japan ... and he expressed his strong desire to strengthen the U.S.-Japan alliance even further in new areas."

Suga said in Tokyo that Biden had expressed his commitment to defending an island chain claimed by both Japan and China under the Japan-US Security Treaty, known as the Senkaku islands in Japan and the Diaoyu islands in China. The Prime Minister, calling the phone call "very meaningful," also said he had asked Biden for US cooperation on the issue of North Korean abductions.