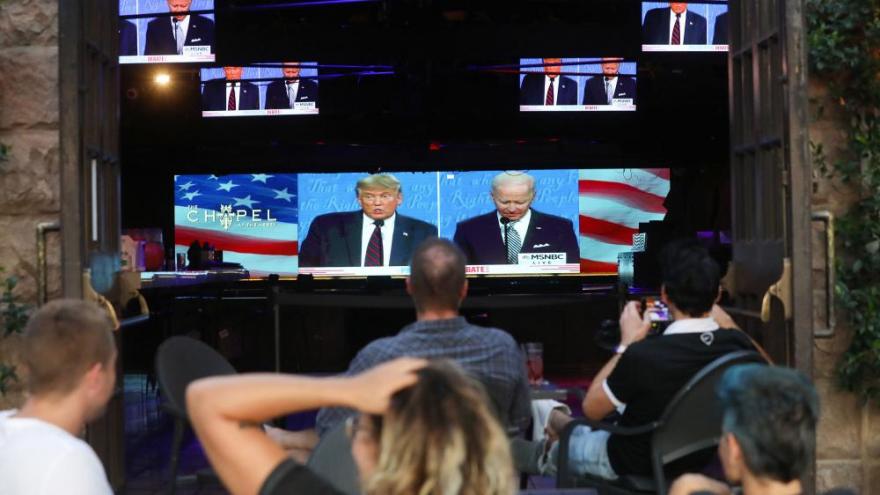 People sit and watch a broadcast of the first debate between President Donald Trump and Democratic presidential nominee Joe Biden at The Abbey, with socially distanced outdoor seating, on September 29, 2020 in West Hollywood, California. The debate being held in Cleveland, Ohio is the first of three scheduled debates between Trump and Biden.

(CNN) -- There are few words that can describe Tuesday night's presidential debate.

But there are many that helped capture what the national conversations revolved around in the following hours.

The Merriam-Webster Dictionary shared terms like white supremacist, antifa, fascism and racism were all trending after the debate.

Here's what else Americans were looking up after President Donald Trump and Democratic rival Joe Biden took the stage:

According to the dictionary, logorrhea is defined as "excessive and often incoherent talkativeness or wordiness." Lookups on Tuesday night spiked 56,000%, the dictionary said.

President Donald Trump was criticized for his repeated interruptions throughout the night, once prompting Biden to respond, "Will you shut up, man?"

The term jumped to the top of the website's searches after MSNBC's Rachel Maddow used it following the debate, the dictionary said.

In another attempt to stop Trump's interruptions, Biden asked, "Will he just shush for a minute?"

That word saw high searches following that question, and lookups spiked 28,900% Tuesday night, according to the dictionary.

"To urge to be quiet, to hush," according to the dictionary.

Xenophobia "is the fear and hatred of strangers or foreigners or of anything that is strange or foreign," the dictionary says. Lookups for the word rose during the debate, according to the dictionary.

In the debate, Trump claimed Biden called him xenophobic for the travel restrictions his administration imposed at the start of the pandemic on foreign nationals who had been in China.

"I closed it, and you said, 'He's xenophobic. He's a racist and he's xenophobic,' because you didn't think I should have closed our country," Trump said.

It's unclear Biden knew about the restrictions in late January when he said Trump has a record of "hysterical xenophobia" and "fear mongering."

Another term that saw high searches was "moderator." Lookups for the term spiked 3,500% on debate night, according to the dictionary, "for reasons that must remain between these searchers and their dictionary."

Tuesday night's moderator was Chris Wallace from Fox News, who tried several times to step in and quell arguing as well as restate the rules of the debate, and how much time each speaker was given.

That term has several definitions: "it may be 'one who presides over an assembly, meeting, or discussion' (as in the chair of a discussion group or the presiding officer of a town meeting), or 'one who arbitrates; a mediator' (this is sense that is relevant to tonight's debate ... we think, as it might also be 'a substance (such as graphite) used for slowing neutrons in a nuclear reactor')," the dictionary said.