Here are the key players in the Ahmaud Arbery death trial 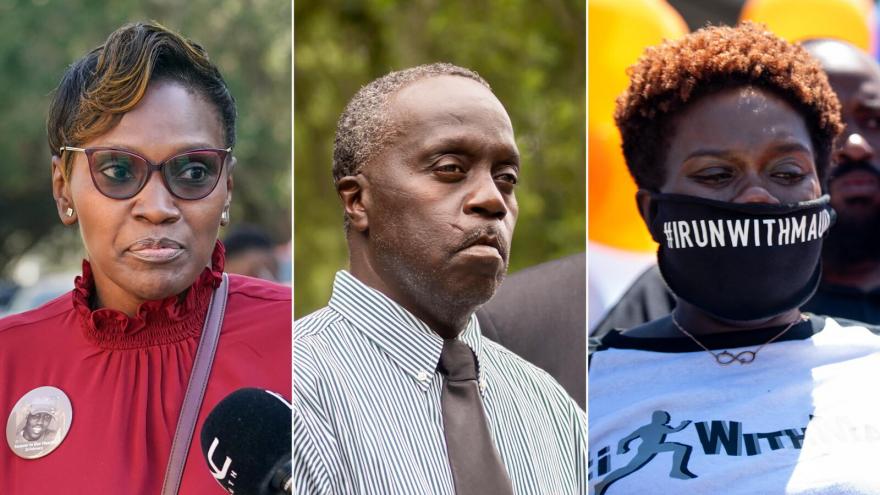 (CNN) -- After two and a half weeks of jury selection, the state trial for three men accused of killing Ahmaud Arbery in Georgia begins Friday.

Travis McMichael and his father, Gregory McMichael, along with William "Roddie" Bryan, did not face charges in the February 2020 incident until months later, when video surfaced that appeared to show the McMichaels chasing Arbery in their truck as he was jogging.

The video, recorded by Bryan, sparked outrage across the nation, becoming yet another example of the perils Black people face while engaged in ordinary activities.

The three men are charged with malice and felony murder and have pleaded not guilty. They also face charges of aggravated assault, false imprisonment and criminal attempt to commit a felony.

Here's a look at the people who have played a key role in this case:

Arbery, 25, was killed February 23, 2020, while running through a neighborhood outside of Brunswick, Georgia, less than 40 miles north of the Florida-Georgia border.

Because his death took place just weeks before the pandemic closed down the country, there wasn't heavy media coverage of the incident until May 2020, when a 36-second video surfaced that showed two men chasing Arbery.

The video begins with Arbery jogging down the middle of a two-lane road toward a pickup truck stopped in the road. Gregory McMichael is in the bed of the truck while his son is standing near the driver's side door with a shotgun.

Arbery approaches, and a physical confrontation occurs between him and Travis McMichael. Three shots go off as the two men struggle, which is seen in and out of the frame. After the third shot, blood appears on Arbery's T-shirt before he stumbles and falls onto the road.

Arbery did have run-ins with the law. In 2013, he brought a gun to a high school basketball game, Rod Ellis, the police chief of Glynn County Schools, testified in May. Arbery was also arrested in 2017 after attempting to shoplift a TV, another officer testified.

Defense attorneys for the three men wanted to be allowed to tell the jury about these previous incidents and Arbery's convictions, but state prosecutors argued Arbery's criminal record was not relevant to the actions the three men took that day, chasing him through the subdivision armed with guns and using pickup trucks.

Superior Court Judge Timothy Walmsley issued an order denying the defense's motion to use his criminal history during the trial.

His death inspired runners around the world to jog 2.23 miles and document their runs using the hashtag #IRunWithMaud to honor him on what would have been his 26th birthday.

Gregory McMichael is a former investigator for the Brunswick Judicial Circuit District Attorney's Office. His son, Travis McMichael, was a machinery technician for the US Coast Guard, according to a legal motion filed by his attorney last year.

Travis McMichael has one son and a younger sister. He has lived in the Brunswick area his entire life aside from the nine years he spent in the Coast Guard, according to the motion.

The McMichaels said they were conducting a citizen's arrest of Arbery in February because they suspected he was responsible for a string of recent purported burglaries in the neighborhood, even though a Glynn County Police spokesperson later said there had only been one burglary reported more than seven weeks prior to the shooting.

According to Georgia's former law, private citizens could arrest someone if they had immediate knowledge or reasonable suspicion the person had committed a crime. The law now says a detained offender must be released if law enforcement does not arrive within an hour of a call by the person conducting the citizen's arrest.

After the shooting, Gregory McMichael left a voicemail with his former boss Jackie Johnson, who was then the Brunswick Judicial Circuit district attorney.

Prosecutors said McMichael was trying to "influence and obstruct the investigation."

The father and son were arrested about two months after Arbery died on charges of murder and aggravated assault, and they were indicted in June 2020.

The indictment charged the McMichaels with malice and felony murder charges in Arbery's death, according to the Cobb County district attorney.

In April, the McMichaels were indicted on federal hate crime charges. Each was charged with one count of interference with rights and one count of attempted kidnapping, a news release by the Department of Justice said.

William "Roddie" Bryan is the man who filmed Arbery's last moments. His attorney, Kevin Gough, has said a polygraph confirmed Bryan was not involved in the incident.

Gough told CNN that Bryan was working in his yard when he saw a person he did not know being chased by a vehicle he recognized from the neighborhood.

Bryan began filming the incident, at one point getting in his vehicle and following Arbery, who was being chased.

Once the video was released, Gough said his client and his family were targeted by protesters. Gough said Bryan and his fiancée had to go into hiding.

However, Gregory McMichael told police Bryan tried to help the McMichaels stop Arbery earlier, according to an incident report.

The Georgia Bureau of Investigation arrested Bryan on charges of felony murder and criminal attempt to commit false imprisonment, according to a news release from the GBI.

He was later indicted on federal hate crime charges including interference with rights and with one count of attempted kidnapping.

Travis McMichael is being represented by Robert Rubin and Jason Sheffield, who are part of the Decatur, Georgia-based law firm Peters, Rubin, Sheffield and Hodges.

Both sets of attorneys said the public rushed to judgment of their clients after they were charged.

"While the death of Ahmaud Arbery is a tragedy, causing deep grief to his family -- a tragedy that at first appears to many to fit into a terrible pattern in American life -- this case does not fit that pattern," attorney Frank Hogue said in a statement in May 2020. "The full story, to be revealed in in time, will tell the truth about this case."

"Roddie Bryan has committed no crime. We look forward to a fair and speedy trial, and to the day when Mr. Bryan is released and reunited with his family," Gough said in a statement.

The attorneys asked a judge to consider allowing them to tell a jury about Arbery's past run-ins with the law during the state trial. The judge later denied the motion.

Dunikoski is the sixth prosecutor to be appointed to the case after a string of recusals in 2020, a local election and one attorney resigning.

Jackie Johnson, Brunswick Judicial Circuit district attorney, was the first prosecutor. She recused herself from the case, citing Gregory McMichael's position as a former investigator in her office.

Johnson was indicted and arrested in August 2021 on charges of violating her oath as a public officer and obstructing a police officer.

George Barnhill, district attorney of the Waycross Judicial Circuit, then took over the case, but he recused himself because he discovered his son worked in Johnson's office and had worked with Gregory McMichael on a previous prosecution of Arbery, creating a conflict of interest, according to a news release from the Georgia attorney general's office.

Tom Durden, Atlantic Judicial Circuit district attorney, became the third prosecutor when Georgia Attorney General Chris Carr's office transferred the case to him. Durden later asked to step down because of a lack of sufficient resources.

Carr then requested an investigation by the US Department of Justice, announcing in May 2020 that Joyette M. Holmes, the district attorney in Cobb County, Georgia, was leading the case.

Holmes lost her reelection bid for Cobb district attorney in November 2020 to Flynn Broady Jr. Jesse Evans, who worked in the district attorney's office, then became the lead prosecutor for the case, but he resigned in April, according to The Atlanta Journal-Constitution.

Timothy R. Walmsley has served as the superior court judge for Georgia's Eastern Judicial Circuit since 2012, when he was appointed by former Gov. Nathan Deal, according to his official court biography.

Prior to becoming a judge, he was magistrate in Chatham County, Georgia, and was a partner at a Savannah law firm, where he specialized in commercial and real estate litigation, according to his bio.

One of Travis McMichael's attorneys said he was concerned the activists, signs and demonstrations outside Glynn County Superior Court in Brunswick were "an unconscious attempt to influence any jurors."

Walmsley responded by saying the courthouse grounds are public space.

He then asked the objecting defense attorneys to draft a legal motion "walking me through the First Amendment rights you seek to infringe upon and how you intend to do this."

Members of Arbery's immediate family -- his mother, father and sister -- have spoken with CNN about their thoughts on the case and how it is affecting the family and community.

Jasmine Arbery, Ahmaud Arbery's sister, told CNN's Chris Cuomo in May 2020 the family had been in a "numbing state" in the months following her brother's death.

"We haven't been able to grieve. We're in a constant fight mode because we're trying to seek justice for my brother," she said. "I believe it was a hate crime. ... It was one Black guy and three White guys."

Marcus Arbery Sr., Ahmaud Arbery's father, told CNN that following the legal process has been "rough" for the family.

"It's still emotional for my family because it's a raw trauma," he said. "You know, to watch my son get lynched like that by three White men, ran him down and lynched him like that. It's really raw."

Wanda Cooper-Jones, the outspoken mother of Ahmaud Arbery, says there won't be justice until the McMichaels and Bryan are found guilty and sentenced to life in prison.

When the three men were federally indicted in April, Cooper-Jones said it was "one step closer to justice." She said the federal hate crime charges were "huge" for her.

"They did the investigation properly and they came out with those indictments. So, my family and I were pleased," Cooper-Jones said.

Cooper-Jones has criticized activists for exploiting her son's death. Since Arbery's shooting, a registered trademark, a foundation, a GoFundMe account and a Facebook page memorializing Arbery have been created.

"Money cannot replace what I have lost and the fight for justice does not come without cost," she said in February. "I was not begging for money and I was prepared to fight for my son either way. I have always worked for what I wanted."

Cooper-Jones was also critical of former President Donald Trump's executive order on policing. The order created a federal database of police officers with a history of using excessive force, enacts some reforms to train police and modestly reduces the use of excessive force.

"I didn't think that order addresses anything that concerns Ahmaud's case at all," Cooper-Jones told CNN's Don Lemon.