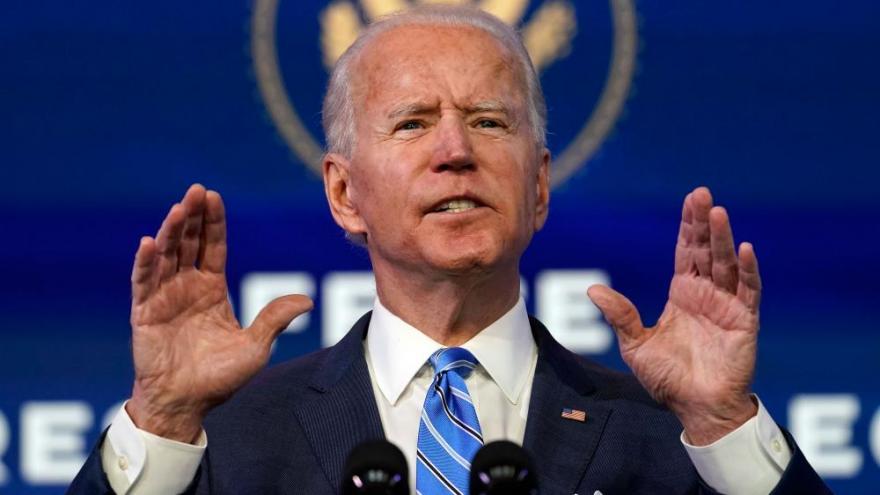 In this January 14, photo, President-elect Joe Biden speaks during an event at The Queen theater, in Wilmington, Delaware.

(CNN) -- President Joe Biden is finalizing 17 executive moves just hours after his inauguration Wednesday, moving faster and more aggressively to dismantle his predecessor's legacy than any other modern president.

Biden is signing a flurry of executive orders, memorandums and directives to agencies, his first steps to address the coronavirus pandemic and undo some of former President Donald Trump's signature policies.

"There's no time to start like today," Biden told reporters in the Oval Office as he began signing a stack of orders and memoranda. "I'm going to start by keeping the promises I made to the American people."

With the stroke of a pen, Biden has halted funding for the construction of Trump's border wall, reversed his travel ban targeting largely Muslim countries and embraced progressive policies on the environment and diversity that Trump spent four years blocking.

Biden also reversed several of Trump's attempts to withdraw from international agreements, beginning the process of rejoining the Paris climate accord and halting the United States' departure from the World Health Organization -- where Dr. Anthony Fauci, the government's top infectious disease expert, will lead the US delegation.

His first action was to impose a mask mandate on federal property, a break in approach to dealing with the pandemic from Trump, who repeatedly downplayed the virus. Biden also installed a coronavirus response coordinator to oversee the White House's efforts to distribute vaccines and medical supplies.

Press secretary Jen Psaki and other top Biden officials had told reporters on the eve of his inauguration that the first-day actions are only part of what will be a series of moves to undo Trump policies and implement Biden's campaign promises in his first weeks in office.

He plans to follow Inauguration Day by centering each day of January on a specific theme, according to a draft of a calendar document sent to administration allies and viewed by CNN.

The themes next week will be "Buy American," with a Monday executive order beefing up requirements for government purchases of goods and services from US companies; equity on Tuesday, coupled with a push to eliminate private prisons; climate on Wednesday with an executive order kicking off regulatory actions reestablishing the President's Council of Advisors on Science and Technology and combating climate change; health care on Thursday, a day on which Biden will rescind the so-called Mexico City Policy blocking federal funding for non-governmental organizations that provide abortion services; and immigration on Friday, when Biden plans to sign executive orders focused on border processing and refugee policies and establish a family reunification task force.

February will focus on what's identified in the calendar document as "restoring America's place in the world."

Here's a look at the 17 actions Biden took on his first day in office: