Here are the companies pulling back from Russia 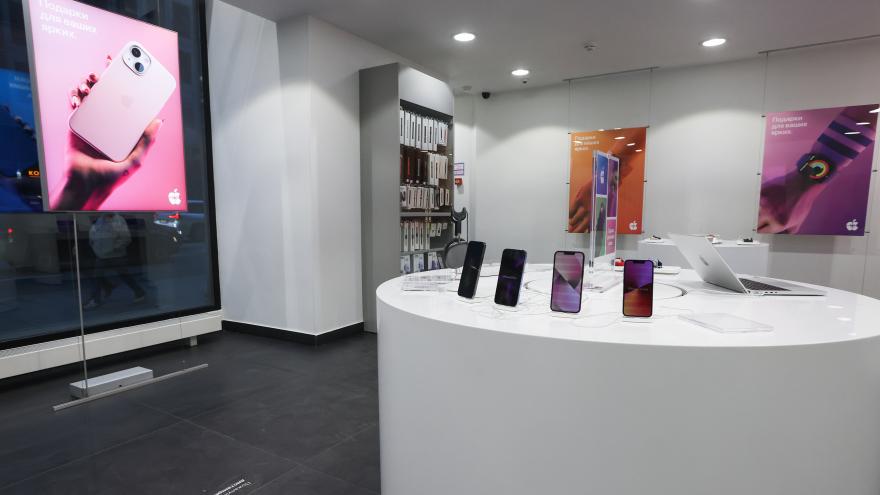 (CNN) -- A growing number of international companies, including Apple, Disney and Ford, are dialing backoperations in Russia over its invasion of Ukraine.

On Tuesday, Exxon announced it would quit its last Russian project, while Boeing said that it had suspended major operations in Moscow.

Other global energy players, including BP and Shell, have similarly moved to distance themselves. And entertainment studios, like Disney and CNN's parent company WarnerMedia, have stopped releasing films in the country.

Russia has been trying to stop the exodus, with new capital controls announced this week. According to the country's state media on Tuesday, Prime Minister Mikhail Mishustin said that Western companies were taking decisions because of "political pressure," and would be prevented from selling Russian assets until that subsides.

Meanwhile, countries around the world have been imposing sanctions against Russia, with new measures from the European Union, United States, United Kingdom, Japan, Switzerland and Australia unveiled in recent days.

Here's a look at the latest major corporate announcements.

Ford announced Tuesday that it was suspending its operations in Russia. The American automaker has a 50% stake in Ford Sollers, a joint venture that employs at least 4,000 people and is shared with Russian company Sollers.

Ford had said earlier Tuesday that it was "deeply concerned about the situation in Ukraine," but did not go so far as to stop operations in the three Russian cities where the company has plants: St. Petersburg, Elabuga and Naberezhnye Chelny.

The company notes that it has "significantly wound down" its Russian operations in recent years, and has "a strong contingent of Ukrainian nationals working at Ford around the world."

General Motorssaid Friday that it was halting all exports to the country "until further notice."

GM doesn't have a significant presence there: It only sells about 3,000 vehicles a year through 16 dealer locations, according to a spokesperson. That's out of more than 6 million vehicles the Detroit-based automaker sells annually worldwide.

Toyota announced Thursday that it would stop making cars in Russia, or importing them to the country "until further notice, due to supply chain disruptions."

"Like everyone around the world, Toyota is watching the ongoing developments in Ukraine with great concern for the safety of people of Ukraine and hopes for a safe return to peace as soon as possible," it said in a statement.

Volkswagen is stopping production of vehicles in Russia and will suspend exports to the Russian market, with immediate effect.

"The Volkswagen Group has received the news about the war in Ukraine with great dismay and shock," the carmaker said Thursday. "This decision applies to the Russian production sites in Kaluga and Nizhny Novgorod."

Boeing said Tuesday that it would suspend support for Russian airlines.

A company spokesperson confirmed that it was pausing "parts, maintenance and technical support services for Russian airlines," and had also "suspended major operations in Moscow and temporarily closed our office in Kyiv."

"As the conflict continues, our teams are focused on ensuring the safety of our teammates in the region," the representative added.

Airbus followed Boeing with a similar move on Wednesday. In a statement, the planemaker said it has "suspended support services to Russian airlines, as well as the supply of spare parts to the country."

Apple has stopped selling its products in Russia, the company announced Tuesday.

The company said in a statement that it was "deeply concerned" about the Russian invasion. In response, it has also moved to limit access to digital services, such as Apple Pay, inside Russia, and restricted the availability of Russian state media applications outside the country.

Facebook-parent Meta said Monday that it would block access to Russian news outlets RT and Sputnik across the European Union.

The move comes after receiving "requests from a number of governments and the EU to take further steps in relation to Russian state controlled media," Nick Clegg, the company's VP of global affairs, wrote in a tweet.

Meta has also said it has applied algorithmic restrictions to Russian state media that should prevent it from surfacing as prominently in users' feeds.

Netflixalso said Monday it was refusing to air Russian state TV channels in the country — something that the streamer would have been required to do by Russian law starting this week.

"Given the current situation, we have no plans to add these channels to our service," the company told CNN Business.

Spotifysaid Wednesday that it had closed its office in Russia "indefinitely" and restricted shows "owned and operated by Russian state-affiliated media." The streaming service removed all content from RT and Sputnik in Europe and other regions, a company spokesman said.

"We are deeply shocked and saddened by the unprovoked attack on Ukraine," the spokesman added. "Our first priority over the past week has been the safety of our employees and to ensure that Spotify continues to serve as an important source of global and regional news at a time when access to information is more important than ever."

Roku,a company that sells hardware which allows users to stream content through the internet, has banned RT worldwide.

YouTube, which is owned by Google, said over the weekend it had blocked Russian state media within Ukraine, including RT. The video platform also said that it would be "significantly limiting recommendations to these channels."

Google and YouTube have also said they will no longer allow Russian state media outlets to run ads or monetize their content.

Airbnb's cofounder and CEO Brian Chesky said in a tweet on Thursday that his company was suspending all operations in Russia and Belarus.

Intelhas stopped all shipments of its products to Russia and Belarus, the company announced Thursday.

Microsoftannounced Friday it was suspending all new sales of its products and services in Russia. President and vice-chair Brad Smith also said the company is stopping "many aspects" of its business in Russia in compliance with government sanctions. Microsoft also said it will continue aiding in Ukrainian cybersecurity.

BP said Sunday it was planning to exit its 19.75% stake in Russia's biggest oil company, Rosneft, and their joint ventures — amounting to one of the biggest foreign investments in Russia.

Equinor will also begin to exit its joint ventures in Russia, the Norwegian oil and gas company announced Monday.

"We are all deeply troubled by the invasion of Ukraine, which represents a terrible setback for the world," said CEO Anders Opedal.

The company said it had $1.2 billion in long-term investments in Russia at the end of 2021. It has operated in Russia for more than 30 years and has a cooperation agreement with Rosneft.

Exxon pledged Tuesday to leave its last remaining oil-and-gas project in Russia and not to invest in new developments in the country.

The Sakhalin-1 venture is "one of the largest single international direct investments in Russia," according to the project's website. An Exxon subsidiary has a 30% share, while Rosneft also owns a stake.

By quitting this project, Exxon would end more than a quarter-century of continuing business presence in Russia.

Shell is also getting out of Russia and ditching its joint ventures with Gazprom, including its involvement with the moribund Nord Stream 2 natural gas pipeline.

"We are shocked by the loss of life in Ukraine, which we deplore, resulting from a senseless act of military aggression which threatens European security," Shell CEO Ben van Beurden said in a statement.

TotalEnergies on Tuesday also condemned Russia's actions and said it would no longer provide capital for new projects in the country.

The French oil giant has done business in Russia for 25 years, and recently helped launch a major liquefied natural gas project on the Siberian coast.

Mastercardannounced Monday that it had "blocked multiple financial institutions" from its network as a result of anti-Russian sanctions, and would "continue to work with regulators in the days ahead."

Visa also said Tuesday that it was taking steps to comply with measures as they evolved.

A spokesperson for the US satellite carrier told CNN Business on Tuesday that it had already been reviewing whether to renew the outlet's carriage agreement, which was due to expire later this year. Russia's war on Ukraine sped up its decision, according to the representative.

Disney is also suspending the release of its theatrical films in Russia, citing "the unprovoked invasion of Ukraine."

The entertainment giant had multiple films set for release in Russia in the coming months. That includes Marvel's "Doctor Strange in the Multiverse of Madness" on May 5 and Pixar's "Lightyear" on June 16.

"We will make future business decisions based on the evolving situation," a Disney spokesperson said.

WarnerMediasaid Monday that it would pause the release of "The Batman" in Russia.

The film is anticipated to be one of the biggest blockbusters of the year, and will be released in most countries by Warner Bros., which, like CNN, is a unit of WarnerMedia.

A company spokesperson said that the decision was made "in light of the humanitarian crisis in Ukraine," and that the company hoped "for a swift and peaceful resolution to this tragedy."

H&M will pause all sales in Russia, it announced Wednesday.

In a statement, the company said that it was "deeply concerned about the tragic developments in Ukraine, and stand with all the people who are suffering."

The clothing giant's stores in Ukraine are already closed due to safety concerns.

H&M Group, which operates a number of brands, had 168 stores in Russia as of last November, according to its website.

Ikea, the world's largest furniture company, is closing its 17 stores in Russia. The company said the conflict is having a "huge human impact" and "resulting in serious disruptions to supply chain and trading conditions." In addition to pausing its retail and manufacturing operations in Russia, it will suspend all trade with the country and its ally, Belarus.

Ikea said 15,000 workers would be directly affected by the shutdown in the region. The company will continue to pay them, at least for a while.

German sports company Puma said it is suspending operations of all of its stores in Russia on Saturday. The company said it operates more than 100 stores in the country.

Maersk and MSC Mediterranean Shipping Company are both halting cargo bookings with Russia.

"As the stability and safety of our operations is already being directly and indirectly impacted by sanctions, new Maersk bookings to and from Russia will be temporarily suspended, with exception of foodstuffs, medical and humanitarian supplies," the Denmark-based company said in a statement Tuesday.

"We are deeply concerned by how the crisis keeps escalating in Ukraine," the company added.

MSC, a Swiss-owned container shipping line, said its own suspension started on Tuesday, and would include "all access areas, including Baltics, Black Sea and Far East Russia."