Her train broke down. Her phone died. And then she met her future husband 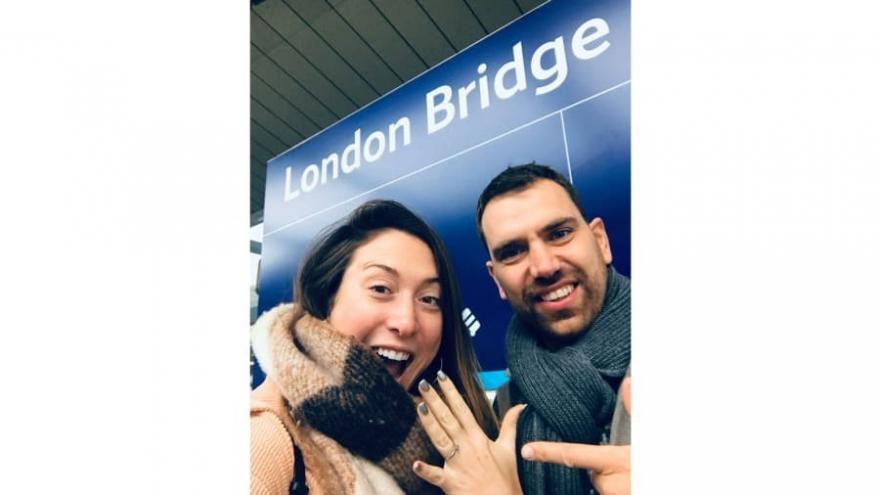 (CNN) -- For 33-year-old Sarah Richard, life has long revolved around scuba diving. As the founder of Girls that Scuba, billed as the world's largest scuba community for women, she traveled nonstop to host dive trips and events before the pandemic.

It would not be unusual for Richard to spend a few weeks in Jordan, then pop over to Egypt, then fly to Mexico, Micronesia, the Maldives or Indonesia to immerse divers in the magic of the underwater world.

When it came to her love life, the divemaster imagined herself meeting a scuba instructor or perhaps someone in the travel sphere with a similarly nomadic lifestyle. After all, she was laser-focused on her mission to empower women in the male-dominated scuba industry.

Indeed, nothing could derail her -- not even the pandemic -- but Richard was wrong about one thing. The love of her life wouldn't be an instructor she met on a liveaboard in Raja Ampat or a resort on Socorro Island. It would be a passionate asparagus farmer from southwestern England.

It all started with a mid-December visit to her hometown of Hastings, on the southern coast of England, for Christmas in 2018.

After living and diving in Mexico for four months, Richard was in town for a few days and had a schedule full of holiday events. One morning, she took the train up to London for the day to reconnect with friends she had met while living in Hong Kong a few years prior.

"I never usually go to London ... ever," recalls Richard. "That was the first time in like absolute years."

After a day out with her friends, Richard had to return to Hastings, about 90 minutes southeast by train, for a holiday party at 9 p.m.

But when she arrived at the metro station, it was closed for repairs. She rushed to get an Uber to the London Bridge station in central London in hopes of catching the next train but missed it due to heavy traffic.

Richard sat at the station for about an hour. By then, her phone battery had died, and she could not update her friends in Hastings.

"Finally, I got on the train, and it's heading out of London, and I'm so excited to get to the party. But then, about a half-hour out, an announcement says the train has to stop because it's broken down and everybody has to get off. And I was like, come on..."

Her long evening of transit woes continued -- and she had to make her way all the way back to London and sit on the platform once again for 90 minutes. This time, she was waiting for the last train of the evening.

"Since my phone was dead, I had no way to entertain myself on the train," she recalls. "I just said to myself, 'What would you do if you were on a train in another country? You would just talk to somebody.'"

And that's when Joel Gostling walked on and sat down.

Love on the rails

The pair hit it off instantly, chatting the whole ride to Hastings. He made a strong first impression -- "a real English boy" who was down-to-earth and easy to talk to, says Richard.

"He had his own asparagus field, which is uncommon, and really enjoys just being outside. I got the impression straight away that he is not materialistic," she recalls, adding that he didn't over-romanticize her nomadic lifestyle.

"Joel thought all my traveling and the places I'd been is cool, but he also thought the life he built for himself with his farm is cool, too -- and it is."

Gostling grew up in a village called Dalwood in the southwest England region of Devon, where his primary school had 30 kids, and he felt at home on a farm, in the fields or hanging out at a local pub.

After working at a celebrated farmhouse restaurant and cookery school, River Cottage in Devon, Gostling turned one of his parents' fields into an asparagus farm in 2015 and sold the hand-picked asparagus to restaurants around the region.

Toward the end of the journey, Gostling asked Richard for her number, but she had no idea what it was. She had just swapped out a Mexican SIM card for a UK number, and her phone battery was dead.

"I genuinely didn't know my number but wanted him to be able to reach me. So I said, 'This is going to sound egotistical, but if you just Google 'Sarah Richard', you'll be able to find me on Instagram and find my email.'"

Gostling had every intention of contacting her.

"She was interesting, beautiful, mysterious, engaging. I was taken aback by how well we got on straight away, and I knew I couldn't leave the train without asking to see her again," he recalls.

Richard eventually made it back to Hastings, only to fly to Finland the next day to spend Christmas with her brother and his family.

She hoped to hear from Gostling but didn't dwell on it. After all, Richard had a full calendar ahead, with plans to fly back and forth between Mexico and the Middle East for scuba trips.

They started keeping in touch long-distance, with Richard making pitstops in the UK between trips for two to three weeks.

"I was pretty focused on staying on my track. I was like, 'If you want to come along, come along for the ride, but I'm not coming off,'" she says. "My travel schedule was really intense. And he knew straight away that that was my lifestyle. And that's kind of what it was always going to be."

The dynamic worked well for them. They both focused on what they were most passionate about while valuing their time together. In 2019, Richard and Gostling moved in together, which only deepened their connection.

"I realized that having someone who is the complete opposite of me is actually what I wanted. So I can still do my thing and then come back and like to have something different to talk about," says Richard.

"Really, the only thing that changed was that he was there to pick me up at the airport. It was so cute because every single time, he had a different sign with a different phrase on it."

Gostling didn't mind either, and all the while, he was cooking up a plan to show Richard just how much she meant to him. "When you know, you know," he adds.

On December 15, 2019, exactly one year after they met on the train, Gostling orchestrated a surprise proposal.

"On the same [route], the same platform, Joel popped out on the train and got down on one knee and proposed to me."

All the while, Gostling says it was utterly "nerve-wracking". It took lots of time and effort to coordinate -- "I started planning on October 6, then proposed December 15. It took that long!"

After they got engaged, Richard continued to travel while Gostling focused on his farm. In early 2020, Richard turned her ambitions to Jordan, where she hoped to establish a Middle East arm of Girls that Scuba.

The couple moved to Jordan and started setting up their lives there. Gostling planned to work remotely, returning to England during harvest season. They were there just four days before the country went into lockdown due to the Covid-19 pandemic.

It also meant Richard could no longer run her diving trips.

"When travel completely stopped, most of my income was gone because it comes from taking people on trips and events. So Joel had no income [because he worked in the restaurant industry]. I had no income. It was awful."

Without an apartment or income, they had to move in with Gostling's parents in Devon.

For Gostling, the move home ended up being a blessing in disguise. Chef Andy Tyrell, who Joel had worked with at River Cottage, invited Joel to join him in setting up a pop-up kitchen.

The pair called it Goose & Badger, and while they had to navigate lockdowns several times, they established a following for their multi-course menus and delicious burgers.

The pop-up was so successful that in May 2021 Gostling and Tyrell opened a restaurant in Bridport called Soulshine, specializing in seasonal, farm-fresh dishes for breakfast, lunch and dinner.

While Richard's nomadic life came to an abrupt stop, she found places to dive along the coast of England and continued to build her online community.

"It was such a chance encounter, and even though there have been hard times, we are both so secure in the knowledge that we are with the person we are supposed to be with. It just makes everything so much better, even in these hard times," she says.

Gostling couldn't agree more. "Even after spending all that time together, I still like her," he quips. "It was a good test, really -- we discovered we could get through anything."

'Everything else is a bonus'

Initially, the couple hoped to have a 200-person wedding in June 2020 in Gostling's parents' garden, but they scrapped that plan due to the pandemic.

Instead, they had a small outdoor ceremony for 12 people and postponed a larger celebration until September 2021. "Basically, we got to get married twice and have two parties -- it turned out so nice!" says Richard, who now goes by Sarah Gostling.

After the wedding in September, Richard picked up right where she left off and has been flying around the world since. "It's just like riding a bike. It feels so natural to be traveling again," she says.

"It's also been amazing to watch other people getting back into the ocean and realizing that this is what connects our [scuba diving] community, and it's just beautiful."

The couple also took a belated honeymoon, spending three weeks in Lapland, Finland, where Richard's brother and his family live, and Turkey.

The newlyweds stayed in an igloo with a sauna, rode in a sled pulled by reindeer and went snowboarding for the first time. They traded the snowy landscapes for sunshine and fantastic dining in Istanbul, then capped off the honeymoon in magical Cappadocia among cone-like rock formations and cave hotels.

Looking back, Richard says she feels like they're on the "other side" of the pandemic. They found a house to rent, Gostling's restaurant is thriving, and Richard's diving community is riding a new wave of momentum.

So far this year, Richard has already hosted two Girls that Scuba trips -- the first in the Galapagos, followed by another in the Red Sea.

"On reflection, it's only been three years. But in those three years, we managed to get through a global pandemic, he lost his job, I lost all my income, we had to move back in with his parents in our 30s," says Richard.

"We've been through a lot. It just makes us think that all we need is each other, and that's it. Everything else is a bonus."