Her daughter's birth parents were homeless and sleeping in a tent. So she invited them to stay with her 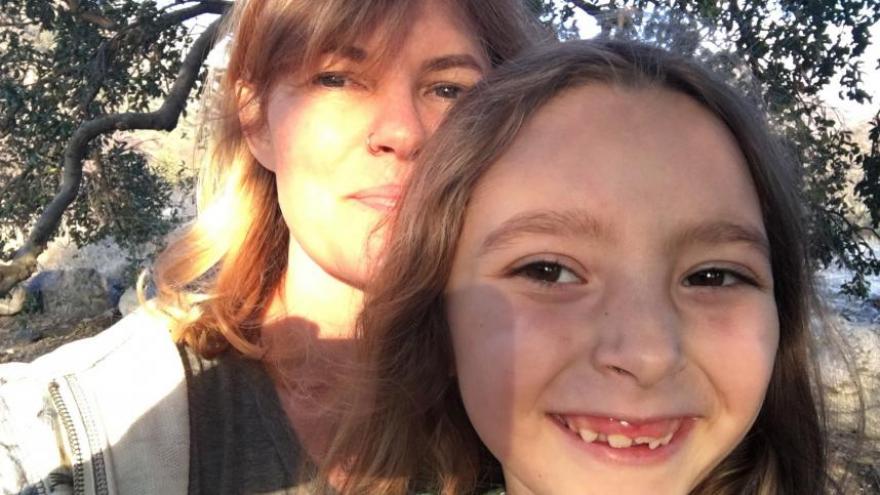 Vanessa McGrady with her daughter Grace.

(CNN) -- In 2013, Vanessa McGrady learned that her 2-year-old daughter's birth parents were living on the street. So she took an unusual step: She invited them to stay with her.

This unorthodox living arrangement, with its joyful and painful moments, became the basis for McGrady's new book, "Rock Needs River: A Memoir About a Very Open Adoption."

McGrady and her husband, Peter, had met their daughter's biological mother just four days before she gave birth. They bonded with the young, very pregnant woman and her boyfriend in part due to a shared love of music.

After McGrady and her husband took their newborn daughter, Grace, home to their 2-bedroom condo in Glendale, California, they kept in touch with the biological parents via email and Facebook.

Fast forward two-and-a-half years, and almost everything had changed. McGrady was separated from her husband. Her daughter's birth parents were homeless. When McGrady learned of their plight, she made a very unconventional choice.

In the 14 years I've known McGrady she's been unfailingly bold and generous. I spoke with her recently about her story of adoption and adaption. (Her answers have been lightly edited for length and clarity.)

CNN: Tell me about the circumstances Grace's birth parents were in when she was born.

McGrady: So, at that time, Bill and Bridgett were living in a small apartment. It was more like a residential hotel. Bridgett was unable to find work. She had a background in grocery stores. And Bill was assistant managing a Pizza Hut. But they were barely making it. And then a couple of years later, they got evicted. Bill had lost his job and they just couldn't afford to do it anymore...they were out on the sidewalk in Los Angeles.

And when it became winter, it was really rainy and stormy and cold, and I invited them to stay with us, because, you know, what else would you do? They were living in a tent. And I just feel like that is the thing you do when someone you know becomes homeless. You give them a spot to rest.

CNN: Did you give a lot of thought to doing this or was it more of a quick decision?

McGrady: I didn't give a lot of thought to it, because I don't know you repay an un-repayable debt. Them choosing us to become parents is really something I can never, ever repay and if it means them bunking with us for a little bit, that's okay. There are things that I wish I had done differently, but I don't regret inviting them to stay.

CNN: What was it like living with Bill and Bridgett?

McGrady: It felt like it was in between having friends and family stay. They were very polite and tidy. We tried hard to stay out of each other's way, but I also wanted them to feel comfortable. They were also very sweet with Grace.

CNN: Do you think Grace benefited from having them in the house?

McGrady: I don't know. It's one of her earliest memories. I think it is important for (most) adopted kids to know at least a little about their birth parents. There was one really sweet night I remember that I was having a hard time brushing her hair and they started brushing each other's to show how nice it felt. It didn't convince her, but it was just such a lovely gesture. There was also another time where Bridgett and I orchestrated this great comeback visit from a lost teddy bear on Christmas Eve -- I'd found a replacement -- and that was fun. Of course, Grace figured out it wasn't the same bear, but I'd say our production was pretty good.

CNN: But there were some difficulties, right? Could you outline what happened?

McGrady: I didn't lay out expectations clearly or boundaries clearly. And they would come in and out. So they stayed with us about a month, a month and a half, over the holiday season. And then every now and then, they would come back. But then it kind of came to a point where Grace was feeling very anxious, and she was crying a lot, she wouldn't go to sleep by herself, and I couldn't really pinpoint anything other than these random comings and goings... and so there was a time where I didn't invite them in. And I think that really hurt the relationship. And they were angry at me for a long time for not doing that because up until then I had let them stay when they showed up. But the one time that I didn't really turned things for us.

CNN: But you recovered from that and you later had their cooperation when you started to write the book, right?

McGrady: Yeah, we did. We did. They were very enthusiastic about telling their story. I went to Texas and talked to them and I have a lot of hours of recordings and videos and they did ask me to help tell their story. And then that became a book, and so their story is in "Rock Meets River." But there have been times, over the years, where we have been in and out of contact. And currently they are not in contact with us. But I hope if Grace ever needs them, they will be available to her.

CNN: What were their feelings about the adoption process?

McGrady: Well -- unfortunately I didn't realize this until several years after the adoption happened and I went to Texas and talked to them -- but they did not have a good adoption experience. They felt very marginalized by the hospital. The social workers and nurses tried to convince them to not place the baby for adoption. And they were also stuck with a lot of bills which they didn't expect.

CNN: What kind of bills?

McGrady: Hospital bills. Usually that is facilitated by the agency. It also is possible that the agency was available to them and they didn't use that, or they didn't use the resources that they had available to take care of those things. But also, when you're homeless, it's very difficult to do things that require bureaucracy. When you're homeless, you can't be on hold forever if you have a phone with prepaid minutes, for example. Or if you cannot be on a computer for [an] extended period of time. It's difficult to get around, it's difficult to bring all your things with you. So there are a lot of hurdles to getting things done such as paying hospital bills or even getting to medical appointments.

CNN: Have they been homeless most of the time you've known them, or were they in and out of homelessness?

McGrady: They've been homeless most of the time. They were in a family home in Texas for awhile. They didn't have electricity or running water, but they did have the home.

CNN: And now you're not sure where they are now?

McGrady: I'm not exactly sure.

CNN: Would you say your book is about motherhood, adoption or homelessness in America? Or about all three?

CNN: A lot has happened since the book was published?

McGrady: Yeah, so very sadly, my ex-husband, who's called Peter in the book, he died in January. So we are now navigating that.

CNN: Were you ever nervous about Grace growing too close to her birth parents?

McGrady: Not really. I wondered a little that if they'd stay too long if she'd have confusion, but she's always been pretty clear that I'm her mom and her dad was her dad. I think the more people in her life who can love her, the better. I hope someday she will have a strong relationship with them.

CNN: What does Grace [now 7 years old] know about the book?

McGrady: I've not kept anything secret from Grace about the book. She actually has the audio book on a little CD player in her room. And she's very proud that she is on the cover. So she likes the book. And she likes that the book is in the world. Right now she's not that curious about Bridgett and Bill, but one day she might be, and this book is a love letter to her, to talk about that part of our family.