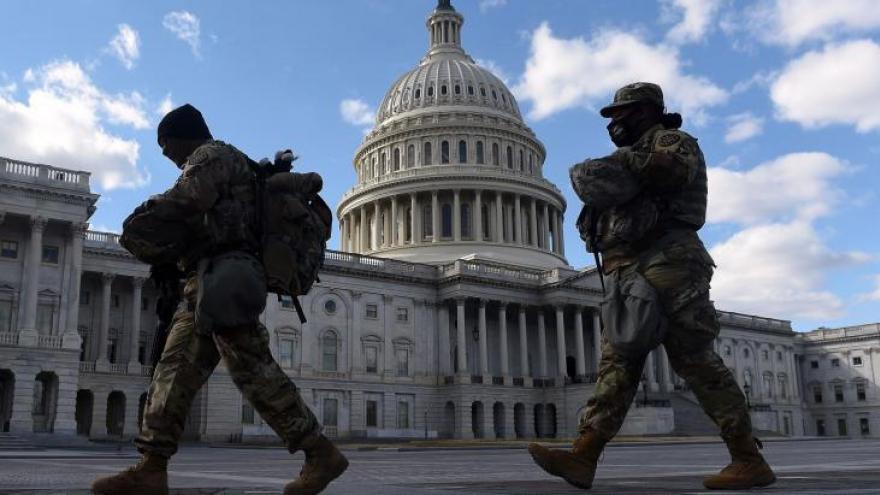 US Capitol Police, Washington Metropolitan Police and local officials requested support from the DC National Guard 12 times on January 6 while the Capitol was under attack, the House Oversight Committee Democrats said June 15.

(CNN) -- US Capitol Police, Washington Metropolitan Police and local officials requested support from the DC National Guard 12 times on January 6 while the Capitol was under attack, the House Oversight Committee Democrats said Tuesday.

RELATED: Meet the internet sleuths tracking down the January 6 insurrectionists

Democrats on the committee pressed FBI Director Christopher Wray and two Army officials about the response to the January 6 insurrection -- including the time it took for Guard officials to respond to the unfolding attack -- during the committee's latest hearing on the riot. The committee released documents and a timeline ahead of the hearing that found then-acting Defense Secretary Chris Miller had authorized the National Guard to "re-mission" to the Capitol at 4:32 p.m. on January 6 and they did not arrive until 5:20 p.m.

"That response took far too long," House Oversight Chairwoman Carolyn Maloney said at the hearing. "After a series of delays, the National Guard did not arrive until 5:20 p.m., more than four hours after the Capitol perimeter was breached. This is a shocking failure."

The New York Democrat also pressed Wray over the FBI's intelligence about threats ahead of January 6, as well as referrals that the conservative social media site Parler had made to the FBI ahead of January 6 about the prospect of violence. The company sent the committee a letter in March saying that it had referred violent content from its platform to the FBI 50 times ahead of January 6.

"The threats, I would say, were everywhere," Maloney said. "The Norfolk Field FBI office notified your office. The Washington Post and other newspapers were writing about it. It was on radio, it was on television, it was on other social media streams. The system was blinking red."

"I do not recall hearing about this particular email, certainly not before January 6," Wray responded. "I'm not aware of Parler ever trying to contact my office."

Wray noted that the FBI did release intelligence products about threats ahead of January 6, though he acknowledged that anytime there's an attack on the scale of the Capitol insurrection it was "unacceptable."

The two Army officials who testified Tuesday -- Army staff director Lt. Gen. Walter Piatt and Gen. Charles Flynn, commanding general of US Army Pacific and the brother of former Trump national security adviser Michael Flynn -- said the delay in deploying the Guard to the Capitol was the result of having to develop a plan for them to go to the Capitol and obtain proper armor after they were originally deployed for unarmed traffic control.

Piatt and Flynn testified that on a call with DC and Capitol officials, Piatt had explained that he was not denying a request for support as the officials believed but said he had to wait for an answer from Army Secretary Ryan McCarthy. In the meantime, they said, they put together a plan for the response.

Piatt acknowledged there had been a delay in the time it took to respond, but argued that time was needed to redeploy the Guard members.

"Now when people's lives on the lines, two minutes is too long," Piatt said. "We were not positioned to respond to that urgent request. We had to re-prepare so we would send them in prepared for this new mission."

Republicans on the committee criticized Maloney for holding another hearing on the attack without testimony from acting Capitol Police Chief Yolanda Pittman, who had declined to appear at Tuesday's hearing. Maloney said Pittman had agreed to testify before the panel next month.

Republicans accused Democrats of trying to score political points with the hearing, while a handful of Republicans questioned Wray about the treatment of those arrested in the insurrection, alleging that some of those arrested had been let into the building by Capitol Police.

"Sadly, today's hearing shows Democrats continue to prioritize politics over the American people," said Rep. James Comer of Kentucky, the panel's top Republican, who argued the committee should instead hold hearings on the US-Mexico border or the origins of the Covid-19 pandemic.

Democrats shot back that Republicans were trying to whitewash the events of January 6. Rep. Gerry Connolly, a Virginia Democrat, compared the attempts to change the subject to a "razzle-dazzle" routine.

Wray testified that he cannot rule out that foreign actors funded extremists leading up to the insurrection and that the agency is "very focused on the interplay between different types of ... nonstate actors overseas, and domestic terrorists here in the United States."

Rep. Raja Krishnamoorthi, an Illinois Democrat, highlighted that Nick Fuentes, the self-proclaimed leader of a White supremacist group called Groypers, was wired a quarter of a million dollars in Bitcoin from a French donor prior to January 6. Krisnamoorthi cited news reports that Fuentes and members of the hate group had attended the insurrection.

"Not only would I not want to rule it out, but certainly the possibility of foreign funding or support for domestic violent extremism is something that's particularly high on our priority list because of the challenges it poses ... using Bitcoin. Certainly that's part of the concern," Wray said in response.