Heavy winds may ground the Macy's Thanksgiving Day Parade balloons, but officials have a plan for that 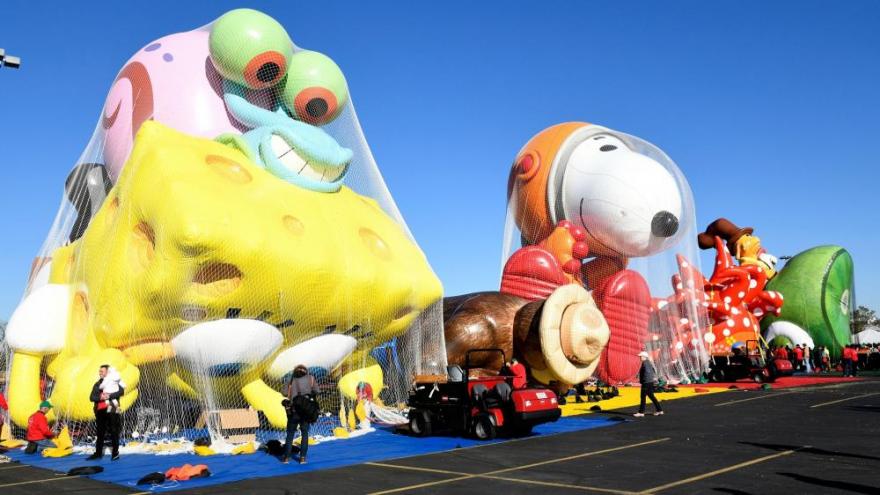 The balloons are seen being inflated as Macy's unveils new balloons for the 93rd annual Macy's Thanksgiving Day Parade.

Officials in New York City are working on a plan around possibly grounding the 16 giant character balloons because of the expected windy conditions. The balloons cannot be flown when sustained winds exceed 23 mph and gusts exceed 34 mph, according to city regulations.

Wind speeds on Thanksgiving day are expected to peak in the morning with sustained speeds of 20 to 23 mph and gusts up to 40 mph, CNN meteorologist Taylor Ward said.

Here's how Macy's and other city entities are preparing for parade day:

The final decision is made the day of the parade

The morning of Thanksgiving, Macy's will work with the New York Police Department to determine whether the balloons will fly, according to company spokesman Orlando Veras.

Each balloon is designed to fly at different heights and angles based on shape and scale and the wind conditions along the route, Veras said.

"The decision on adding the balloons to the lineup is made by NYPD and Macy's officials just prior to the start of the parade and takes into account the weather data along the entire parade route and information from nearby weather stations," Veras said.

If the wind speeds increase during the parade, Veras said officials have the ability to quickly lower the balloons and remove them from the lineup.

There will be wind monitoring stations along the parade route

There's "a number of weather operations in place" during the parade, Veras said.

These operations include licensed meteorologists monitoring conditions on site. Weather officials also are in contact with the National Weather Service.

"In addition, the assistant pilot on each giant balloon carries a wind meter, which is also monitored by an NYPD representative," Veras said.

The parade goes on even without balloons

Even if the ferocious winds do succeed and ground the balloons, the show will go on.

"The parade takes place rain or shine," Veras said. "We will march on with a parade filled with entertainment for New York and the nation."

The only other time in history the balloons were grounded was in 1971 when there was "extreme wind," Veras said.

But officials are not trying to have a repeat of 1997, when the Cat in the Hat balloon injured four people after intense winds forced it astray.