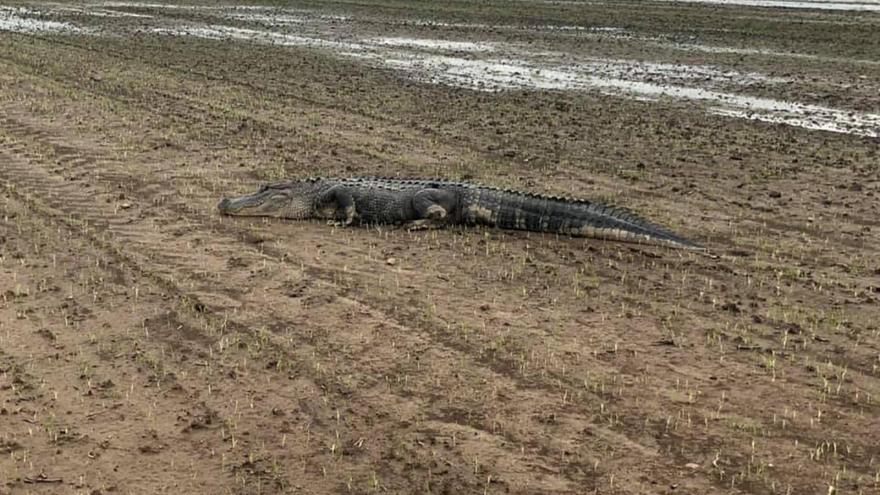 (CNN) -- When it comes to flooding, the problems most people think about are washed-out roads and underwater homes.

But after rainstorms in Missouri and Iowa caused nearby rivers to rise, a family in Northeast Arkansas stumbled upon a 9-foot alligator far from its natural habitat -- in their rice field.

Frank Pierce and his family told CNN affiliate WMC-TV that they found the massive gator basking in the sun on Thursday. The family lives about 90 miles from the Mississippi River and in the same county as one of its tributaries, the White River.

"Me and my brother and my wife and daughter were going fishing and we come around the curve and he was laying out there in the field," Pierce said.

Pierce called the police, and the Jackson County Sheriff David Lucas told WMC-TV that they didn't believe the story at first.

Lucas said, "When we first got the call, we thought well this is some kind of prank or a log or something because you just don't see gators this far north."

But when they got to the scene, they were surprised to see that the call was, in fact, real. The gator greeted law enforcement in the same place it was spotted by the Pierce family.

Lucas called the Arkansas Game and Fish Commission, who said that the siting was due to the overflowing rivers. According to the National Wildlife Federation, alligators are more commonly found in Southeast states such as Louisiana, Alabama, Florida, and Texas.

CNN Meteorologist Monica Garrett said water from the Mississippi River has been high for weeks and flooding will continue to be a concern into June.

The ACFC said it's not uncommon when rivers flood for alligators to leave their usual homes. The commission also found another 4-foot gator nearby while trying to capture the larger animal. However, the gator escaped, and the commission representative told WMC-TV there's a chance no one will ever see it again.