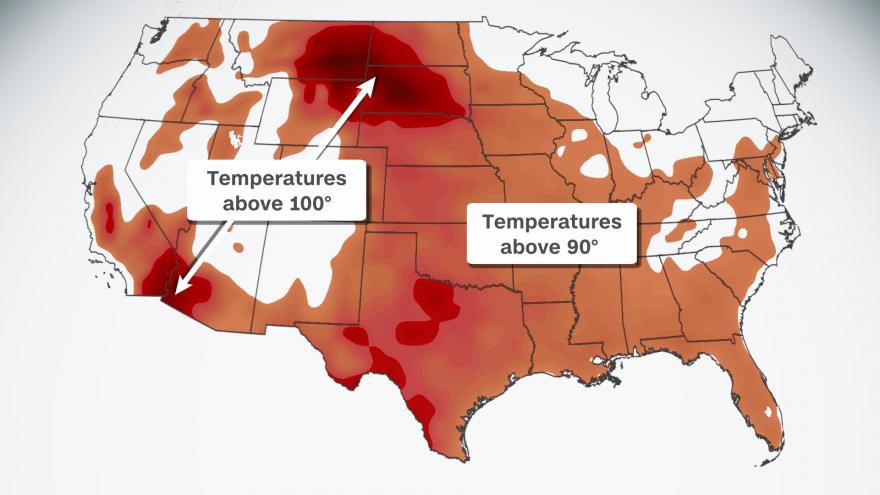 (CNN) -- The latest heat wave to grip the US is here, delivering triple-digit temperatures and heat indices across the country.

The heat will last through the coming weekend and into next week as a high-pressure system moves across the country.

This massive ridge of high pressure will continue to build over the US through the beginning of the week, prompting heat advisories, excessive heat warnings and excessive heat watches nationwide.

Heat alerts span from the Pacific Northwest to the Louisiana Gulf Coast on Monday, impacting over 35 million people.

More heat for the Northwest

The Pacific Northwest has seen extreme temperatures throughout this summer as record-breaking heat waves brutalized the region, exacerbating exceptional drought and massive wildfires.

"Over the Northwest, there is an Excessive Heat Warning over parts of Idaho, eastern Oregon, and the Northern High Plains, where temperatures rise into the 100s through Monday," said the Weather Prediction Center.

Temperatures will peak on Monday in the triple digits but could be limited due to wildfire smoke coverage. Idaho is currently leading the country in the number of large wildfires with 23 currently active, burning over 192,000 acres.

"Smoke limited high temperatures yesterday and will do the same today as HRRR smoke model keeps our entire County Warning Area smoky through at least Tuesday, mainly due to the Dixie Fire in California," the National Weather Service in Boise, Idaho, said.

This round of heat will be short-lived, as much needed monsoon moisture moves north from the desert Southwest into the Great Basin, cooling temperatures back into the 90s by Tuesday and providing slight relief from the scorching conditions.

Daily high temperature records are in jeopardy across southern Montana and northern Wyoming on Monday and Tuesday.

Elevated fire danger remains a concern on Monday and Tuesday for the eastern parts of Montana, where relative humidity values could be as low as 10% and breezy conditions will persist on Tuesday, paired with the 100-degree heat.

Montana is already second in the nation for large wildfires burning, just behind Idaho. Relief from the hot conditions could come Thursday as some monsoon moisture moves into the region, but widespread rainfall is unlikely.

The peak of the above-average temperatures in Montana will be on Tuesday. Widespread triple digits will cover Montana, North and South Dakota, Wyoming and Nebraska.

"Temperatures will remain well above seasonal normals at least through the coming weekend," said the NWS in Glasgow, Montana.

By midweek the hottest temperatures begin to move into the Central US. South Dakota, Nebraska and northern Kansas will see temperatures 10 to 20 degrees above average.

"The warm temperatures aloft, along with the ongoing drought should create highs from 90 to 110 degrees," said the NWS in Aberdeen, South Dakota.

Heat advisories are in place through Thursday for parts of South Dakota, southern Minnesota, Iowa and Nebraska due to high temperatures and heat index values as high as 110 degrees. An excessive heat watch also spans southern Minnesota and central Iowa on Wednesday.

The ridge of high-pressure will center over the Southern Plains by the end of the week, weakening slightly but still elevating heat indices into triple digits.

Heat advisories already cover nearly the entire state of Louisiana along with parts of Texas, Oklahoma, Arkansas, Mississippi, and Tennessee on Monday. The temperatures will just get hotter as the week progresses. The heat wave will make an almost cross-country excursion, impacting southeastern Oklahoma and Arkansas through the Texas Gulf Coast by Sunday as the ridge stations over the area.

"The extended pattern looks very HOT, with high temperatures in the upper 90s to low 100s, and heat index values of 105 to 110 possible for most of the region by early next week. Be sure to take the necessary precautions for extended exposure in the heat and know the signs of heat related illnesses!" said the NWS in Little Rock, Arkansas.

Relief could come early next week due to a cold front pressing down from the north carrying cooler temperatures to the region.