Health care workers on frontlines feel like 'lambs to the slaughterhouse' 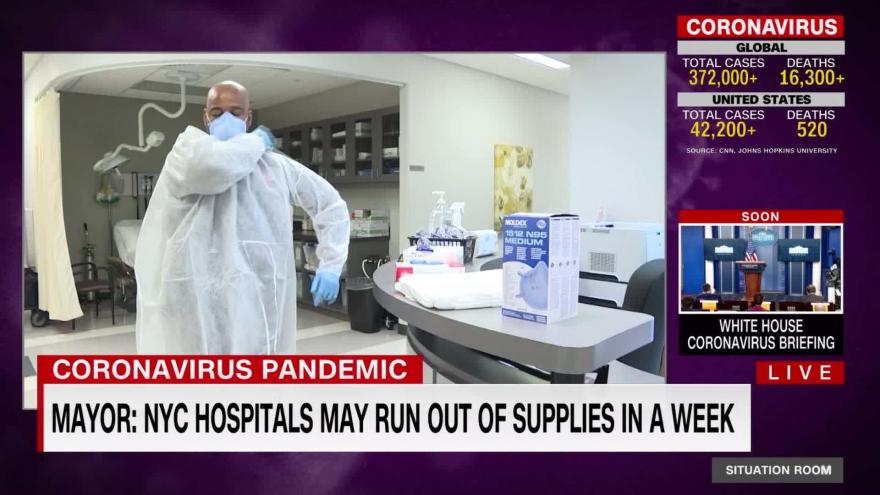 Across the country, health care workers on the frontlines of the escalating fight against Covid-19, the disease caused by the novel coronavirus, describe a grim scene of rationed personal protective equipment -- widely known as PPE -- and lack of testing.

(CNN) -- An anesthesiologist in Arizona turned to eBay for N95 masks. A nurse in Ohio said she and her colleagues are forbidden from wearing any masks for fear that it would spread anxiety. A nursing home employee in Arkansas who developed a fever said she couldn't get tested.

Across the country, health care workers on the frontlines of the escalating fight against Covid-19, the disease caused by the novel coronavirus, describe a grim scene of rationed personal protective equipment -- widely known as PPE -- and lack of testing.

The scarcity of equipment is at a critical stage, where medical workers are being asked do something that weeks ago would have brought reprimand or even termination: reuse supplies.

"I was provided one mask; they said that's all I'm getting," said a certified nurse anesthetist in Akron, Ohio, who asked not to be identified for fear of reprisal.

"We just had a survey by the joint commission that oversees the hospital...One of the sticking points in the survey was that you need to change your mask between every case."

So dire are the shortages that the US Centers for Disease Control and Prevention has suggested that health care workers bring scarves, bandanas or makeshift masks from home as a "last resort."

Resorting to bandanas and scarves

Although many hospitals and clinics are scrambling to refill dwindling supplies, the stories from health workers reflect a shaken American health care system that was caught flat-footed by the fast-spreading global pandemic.

Health care workers who spoke to CNN said they are not only scared for themselves, their patients and their families -- they are also angry. Scores of them reached out to CNN to share their stories and frustrations.

"It's unacceptable that we're sending medical professionals like lambs to the slaughterhouse without giving anything to protect themselves," said Dr. Marianne Hamra, who works in New Jersey. "Bandanas and scarves? C'mon CDC -- that's completely ridiculous."

Dr. Patrice Harris, president of the American Medical Association, says what she is hearing from her physicians is just unprecedented.

"They are saying that they are having to reuse masks," she said. "They are saying they are being asked to re-sterilize masks, all things which in normal times we would certainly not do. (They) may even be grounds for discipline or dismissal for violating routine infection control pieces, policies and practices."

Doctor looks to eBay to fill the gap

Meanwhile, New York has now topped Washington state as the new epicenter of coronavirus cases with at least 20,875 infected, according to CNN's tally of cases.

"If we don't get more ventilators in the next 10 days, people will die," de Blasio told CNN's Wolf Blitzer on Sunday.

In New Jersey, 35 physicians and nurses are no longer working at Holy Name Medical Center because they are either have or are suspected of having Covid-19.

Holy Name Medical Center's Chief Medical Officer Dr. Adam Jarrett said so far, supplies and staffing are holding up, and he has not had to compromise care -- but he's not sure for how long.

"I'm very concerned that if things don't slow down, if the supply chains do not open up, if we don't figure out a way to get the nurses in here from the federal government (and) from the military," he said. "I feel in a week or so from now I may not be able to feel the same way."

In Arizona, an anesthesiologist said he and his fiancée, who work at the same Phoenix-area hospital, have resorted to purchasing N95 masks on eBay.

"I have a FedEx shipping arriving on Tuesday, but we'll see," said the anesthesiologist, who asked to remain anonymous because he isn't authorized to speak with the press. "We are the ones handling the patients' air tubes, so we are really in a bad position."

A nurse in western Ohio said that, save for one specific unit where Covid-19 patients are supposed to be sent, nurses at the medical center are forbidden from wearing masks -- not just N95 masks, but surgical masks or any masks.

"My problem is, you don't know who's coming in or out," said the nurse, who asked not to be identified for fear of retaliation. "We know there are people who are asymptomatic...But we're not allowed to wear PPE; we were told it would give patients anxiety."

But she said the lack of a mask has filled her with anxiety.

"I don't want to bring anything home to my kids," she said. "I'm a single mom. I signed up to be a frontline worker, but I don't have the equipment to do it."

So fed up was another Ohio nurse that she tendered her resignation on Friday.

"I took this job never knowing that if something like this happened, people were not prepared to protect frontline workers," said the nurse, who declined to share her name because she is hoping to have a conversation with a manager and didn't want to taint the discussion. "It's like they don't care."

In Los Angeles, Dr. Somil Viradia said he must check out a mask to see a patient who is suspected to have the coronavirus.

"And after that you have to use the mask -- the same one -- for five more patients," he said.

Turning to social media for support

The petition calls on the government to tap into a national stockpile of supplies of N95 masks, as well as to leverage the public and private sector to that end. The petition started going around Tuesday. By Monday morning, it had more than 1.2 million signatures.

The closed forums have become an outlet for medical workers who have been told not to talk to the press, said Mehta, a radiologist.

Many physicians, she said, worry about the ethical implications of institutions saying it's ok to perform procedures without protective gear when it's never been ok before.

"Are we doing more harm than good by going in there with no equipment and potentially spreading this to so many other people?" she said in an interview with CNN. "Are we taking out the front lines to our defense when we're so early on in the equivalent of a health care war right now?"

Correction: This story has been updated to correctly attribute the quote, "lambs to the slaughterhouse" to Dr. Marianne Hamra. A previous version included the wrong attribution.