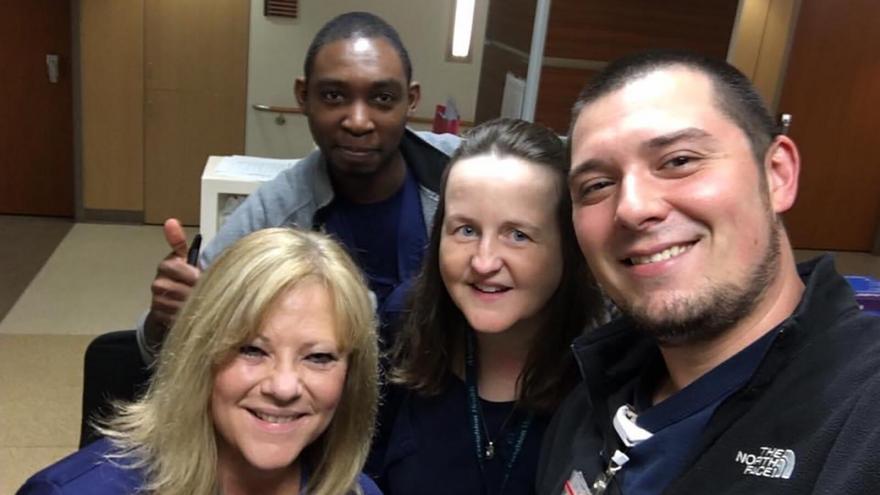 Christine Danderand started a Facebook group to adopt nurses and health care workers because she wanted to do something for her mom Geri Dooling, left, and her fellow nurses.

(CNN) -- Christine Danderand knows how hard nurses like her mother have been working during the coronavirus pandemic and wanted to do something to let them know how much their sacrifices are appreciated.

"I just saw how kind of stressed and overworked her and her co-workers were and I thought, you know, what's a way that we can give back and show support," she told CNN.

She only expected her friends to see it, but the group has grown to more than 12,000 members in just over three weeks and hundreds of health care workers have been adopted.

"We lost count when we hit a thousand," Danderand said.

To participate, nurses and other health care workers can post some information about themselves and a link to their Amazon wish lists.

"If you read a lot of the Amazon links, they want compression socks, or a new pair of shoes, or a coffee mug, candy," she said. "Just little things that kind of brighten their spirits when they get home from work at the end of the day."

The gifts have come from grateful members of the public, doctors, who adopt entire hospital units, and even other nurses.

She said she's heard from a lot of people who've made new friends through the group.

"It's not just a gifting page anymore. It's something where they've got support from their peers," she said.

Danderand said that she, her husband and her daughter all had Covid-19 in October. They're doing well and never had to be hospitalized, but it gave her a first-hand understanding of what health care workers are dealing with.

She says she has been spending about four hours a day running the group and has recruited three of her friends to help.

One of her new volunteers is a hospice nurse and was one of the first people adopted by the group.

"I got a coloring book for nurses and I got a lunch box because I travel a lot for work," Kris Epps-Martinez told CNN affiliate KETV.

She told KETV that she's been adopting other nurses to pay it forward.

"I deal with death all the time," Epps-Martinez said. "These other nurses aren't used to this. It's hard on them. They deal with death, but not like this."

Danderand had only planned to run the group for a few weeks, but says it doesn't feel right to stop now, since the number of cases is soaring.

Health authorities have identified more than 15 million Covid-19 cases throughout the United States since January and more than 294,000 people have died, according to Johns Hopkins University.

"We've got these people that go to work day in and day out, and they're exhausted, and they leave work in tears," Danderand said. "And this is when they need the backing of all of us more than ever."