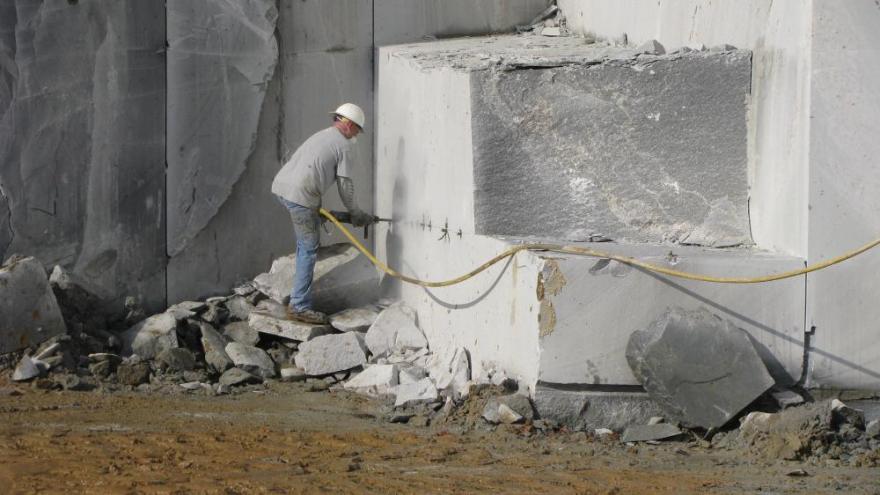 A quarry worker drills holes in a block of granite in Elberton, Georgia, preparing it to be removed.

(CNN) -- One of the toughest parts of Jonathan Modlich's job these days is telling grieving families that he doesn't know when he'll have the headstones for their loved ones ready.

The pandemic-fueled upheaval in the global supply chain is roiling the nation's monument industry at a time when demand for memorials is skyrocketing. Crucial materials, including granite, saws and rubber stencils, are in short supply. Workers can be tough to find and truck drivers even harder.

"We're just as much as possible trying to be upfront with the families we serve," said Modlich, owner of Columbus, Ohio-based Modlich Monuments, which was founded by his great-grandfather. "This could be six to nine months. To be completely honest, it could take longer. These are things that are out of our control."

Many monuments sold in the US are crafted from granite produced in China, India and elsewhere overseas, while a lot of stone-working equipment comes from Europe. Shipping delays and the surging cost of shipping containers have left wholesalers and retailers waiting months for orders, even as their products sit offshore until docks open up at US ports.

Meanwhile, domestic granite quarries and monument manufacturers haven't been able to keep up with the exploding demand.

Adding to the industry's headaches: 3M, a major manufacturer of the rubber stencils needed for sandblasting letters on monuments, stopped production last year. Severely constrained raw material availability and exponentially increasing costs were among the factors in the decision, the company said in a statement to CNN.

In addition to Covid-19, which has killed more than 900,000 Americans, more and more baby boomers are ordering their cemetery monuments in advance.

"We've become inundated with all these orders from retailers we may never even have heard of," said Chris Kubas, executive vice president of the Elberton Granite Association in Georgia, which produces about two-thirds of all the monuments made in the US. "We were stuck. We couldn't expand our infrastructure to accommodate the uptick in orders."

A lot of equipment, including saws and polishers, is on back order. It's been difficult to find workers in rural Elbert county, which has about 20,000 residents -- even though starting hourly wages have jumped to $15, up from $10, Kubas said. Skilled workers can expect to make more than $40 an hour, up from the high $20s.

The industry is also hurting for truck drivers to deliver the products. Manufacturers may at times have multiple fully loaded flatbeds sitting in their lots, he said.

Some companies in the 85-member association have stopped taking orders from new customers because they want to make sure they can fulfill the ones from existing clients.

"It's a perfect storm, and we just didn't have enough time to react," Kubas said. "Now we're just behind the eight ball, and I have no idea when we'll get out from behind it. We're doing the best we can to accommodate all our customers."

Jed Hendrickson, who owns Santa Barbara Monumental in California, ordered a large shipment of dark gray granite -- enough to make about 40 memorials -- from India last May. He checked on its progress at least every other day and was initially expecting to receive it at the end of December.

It finally arrived in mid-February, which will allow him to ramp up production from four days a week to five.

Prior to the pandemic, imported granite took about 90 days to arrive, while domestic granite would take up to 45 days. Now, Hendrickson expects to wait at least double that length of time for shipments.

Though his annual orders are up about 18% compared with pre-pandemic times, he is also paying a lot more for materials. Typically, granite prices would rise 3% to 4% each January, he said.

In 2021, prices rose about 4% in January and then another 8% midyear. At the start of this year, they jumped another 8%.

"I've never seen anything quite like this," said Hendrickson, who has been in the business for 35 years.

Monument makers were expecting a surge in orders years ago as baby boomers aged. But since life expectancy has increased, the uptick didn't materialize until the pandemic struck, which has prompted more senior citizens to want to address their affairs, industry experts said.

Orders at Buttura & Gherardi Granite Artisans in Barre, Vermont -- another main source for granite in the US -- are up 55% so far this year, compared with the same period in 2021, said Mark Gherardi, the company's president, whose family has been in the industry for four generations. He expects business to be brisk for another decade.

Gherardi is pouring millions of dollars into his manufacturing operations, buying new sandblasting equipment, a hydraulic stone splitter and various saws, for instance. He's also hired about a dozen new workers over the past year, bringing the total to more than 60, and he plans to add more.

"Everybody is trying to increase their capacity quickly," said Gherardi, who plans to ramp up production as spring approaches. "It does take time, but it's happening."

Though some families who lost loved ones didn't realize that supply chain disruptions are also affecting the monument industry, they are dealing with the delays.

"At the beginning, it was a lot tougher," said Modlich, who is president of the Monument Builders of North America, an industry group. "At this point in time, more people understand the general state of the world. No one is happy about it. Neither are we."