He was wrongly convicted of murder as a teen. After fighting for 26 years, his name has finally been cleared 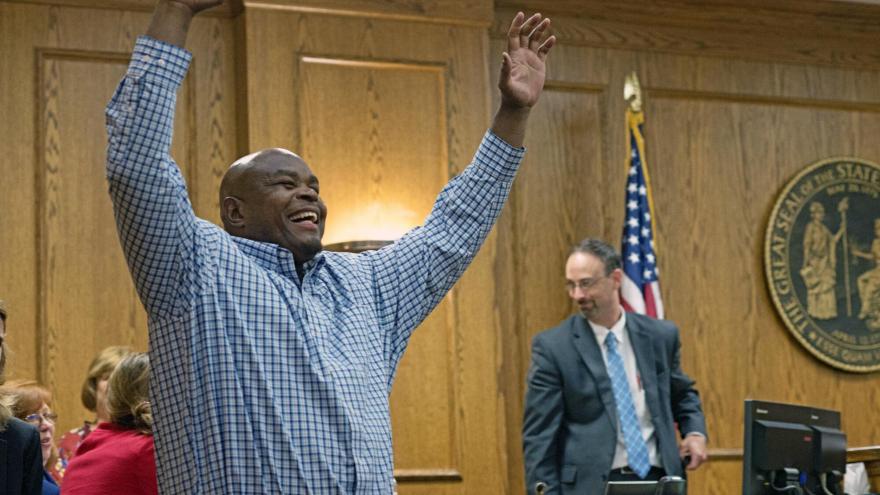 Dontae Sharpe enters a Pitt County courtroom to the cheers of his family after a judge determined he could be set free on a $100,000 unsecured bond on August 22, 2019, in Greenville, North Carolina.

(CNN) -- Dontae Sharpe, a Charlotte, North Carolina, resident, breathed a heavy sigh of relief Friday upon receiving a pardon for a murder he didn't commit -- after spending 24 years in prison.

Sharpe, 46, who's Black, was convicted and sentenced to life in prison for the 1994 murder of a White man in North Carolina. After inconsistencies in a teenage witness's testimony, no physical evidence tying Sharpe to the crime and a pathologist's testimony added as new evidence, Sharpe was exonerated in 2019.

"I'm free now, and the burden of carrying around that felony reputation of being a killer or murder, it was gone," Sharpe told CNN on Monday. "My family name has been cleared. Man, you know, it feels good."

Sharpe is just one of more than 2,890 men and women who have been wrongfully convicted and exonerated in the United States, according to the National Registry of Exonerations. Sharpe and others are striving to fix the broken legal system that put him, and so many other innocent people, behind bars.

"Mr. Sharpe and others who have been wrongly convicted deserve to have that injustice fully and publicly acknowledged," North Carolina Gov. Roy Cooper said in a statement Friday.

The pardon means that Sharpe can seek compensation from the state for his wrongful conviction, his attorney, Theresa A. Newman, said. Sharpe can apply for up to $750,000, or $50,000 for each year he spent in prison, she said.

What opened the path to exoneration

In 1995, Sharpe was only 19 years old when he was convicted of the first-degree murder of George Radcliffe, in the aftermath of a drug deal, according to a court order.

The road to exoneration was about 10 years in the making says Newman, co-director of the Wrongful Convictions Clinic at Duke Law.

"We rejoice in the moment, but fully with the understanding that there is no way, no pardon, no compensation, no apologies, which are not coming, that will make up for the loss of his 25 years," Newman told CNN. "It is certainly a sweet moment, but there is some bitterness behind it."

Sharpe denied a number of plea offers before his trial, maintaining his innocence, he said. Finally, on August 22, 2019, a judge's order overturned the conviction and allowed him a new trial, according to a court order.

There were a number of breakthroughs in the case, but the biggest one came when pathologist Dr. Mary Gilliland testified at a May 2019 evidentiary hearing that the version of the shooting the teenage witness gave at trial was "medically and scientifically impossible," according to the court order. Gilliland said the autopsy report of where the victim was shot was inconsistent with the witness testimony.

The teenage witness testified that she had seen Sharpe kill Radcliffe, but a short time after trial, she recanted her statement and said she was not there at the time of the shooting, according to the court order.

"The judge ruled from the bench that the new evidence demonstrating Dontae's innocence completely destroyed the state's case against him and overturned his conviction and ordered his release immediately," Newman said.

He maintained his innocence from day one

Sharpe's perseverance -- and insistence on maintaining his innocence -- is something that he learned early on from his mother, he said -- something she told him and his three brothers that stuck with him.

Sharpe persisted throughout the two-year process to secure the pardon, which Newman stated was also a process that took way too long.

"This two-year fight was harder than the 26-year fight because I knew ... I was already in prison doing a life sentence, so I had to set my mind to do what I had to do to get out of there," he said. "I thought that the system would work, and when you're in prison you do believe in the system even though it put you in prison wrongfully."

Sharpe says he does not want or need any apologies to keep living his life. But that apology is important to Caitlin Swain, one of his attorneys and the person who pushed to get him pardoned, she said.

"For me, (the apology) matters so much because it is the system acknowledging that it was wronged," Swain told CNN. "And that is a step in building out a new system that will not allow for this to happen to anyone else."

Swain was a law student when she met Sharpe, who was her first client, she said. Swain is now the co-director for Forward Justice, a nonpartisan law, policy and strategy center, where Sharpe works as a fellow.

"There's so much that we cannot control," she said. "But this was an injustice that we can fix. We can fix this. This system is changeable."

The need to work toward getting innocent people out of prison takes too many years, Newman said. Some of her clients got out when they were octogenarians after serving multiple decades behind bars, she added.

"It is much too long to have the truth recognized in the court system and not just in Dontae's case, but in many, many cases," she said. "We have to figure this out and correct the process."

As for Sharpe, he says he does not know what the future holds.