He was nervous about the first day of school, so his school bus driver held his hand for support 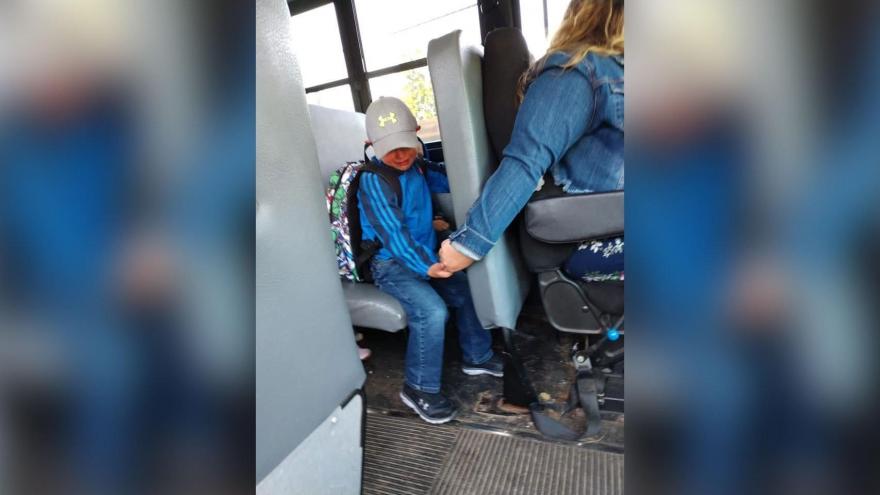 Axel Johnson was nervous about the first day of school, so his school bus driver held his hand for support

(CNN) -- We've all been there. The first-day-of-school jitters. For one Wisconsin student it started on the school bus, last week.

Axel started 4K last week, which is a pre-kindergarten year for kids 4 and under in an elementary school setting. His mom, Amy Johnson, wanted to mark the occasion by taking a picture of him on the school bus.

Instead of a smile, Johnson got tears and a red face.

"He was super excited to go, but when the bus came around corner he was really quiet," she told CNN. "The bus opened the door and I looked at him and he started crying."

Johnson said she picked Axel up to seat him on the bus but he was clinging onto her. That's when the bus driver, Isabel Lane, comforted him by showing him an open seat right behind her.

"I told him, 'Buddy, you got this and will have so much fun,' " Johnson said.

Lane told CNN that Johnson was trying to get off the bus, but Axel kept grabbing for her.

"I stuck my hand behind the seat as maybe something else to grab onto and he grabbed my hand," Lane said.

Johnson said she got off the bus but turned around, still wanting her "perfect picture." That's when she captured the image.

The Augusta Police Department posted the photo of the pair on Facebook and it grabbed people's attention, with many leaving comments praising Lane for her compassion and kindness.

Lane has been a school bus driver for the Augusta School District for a little under a year. She loves working with kids.

"I could see that he needed to be comforted and that was the best I could do at the time," Lane said.

Being in a small town, Lane said she gets to learn about the kids she's driving to school every day.

"You get invested in cheering them on," she said. "A big win for me is every morning I tell the kids as they get off to make it a good day and when I have a kid who I know doesn't like to go to school say, 'Yeah, I'll try.' It makes me feel good because they heard me and I hope it makes them feel like they can be heard."

After talking to the bus driver on the first day, Axel stopped crying before the end of the road, Johnson said.

"Now he gets on the bus everyday ready to go and loves school," Johnson said.

Axel can be a role model. He has a 2-year-old brother who will follow in his footsteps in a few years.