He suspected the buzzing in his ceiling were bees. He just didn't expect to find 100,000 of them 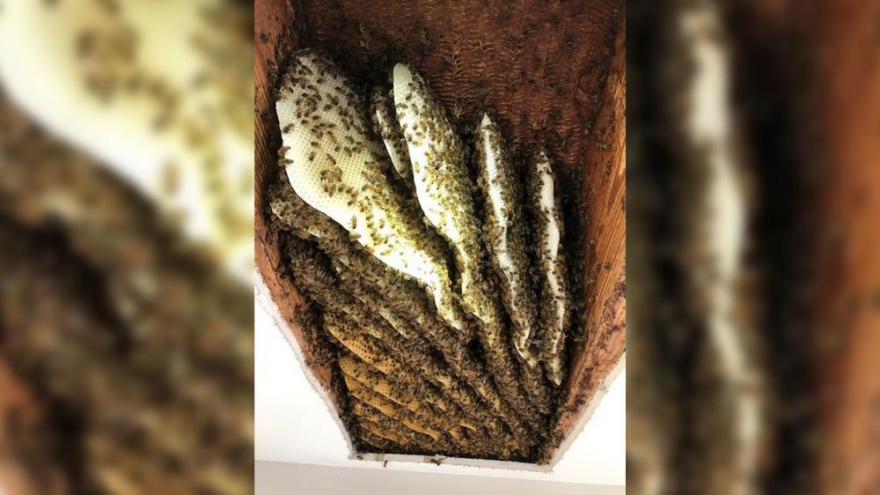 Over 100,000 bees were living in the basement ceiling of George Montgomery's home.

(CNN) -- When George Montgomery moved into his home in Georgia in November 2018, it didn't take him long to realize the property was abuzz.

"I noticed the swarm the spring after I bought the place," Montgomery told CNN. "You could hear them slapping against the wall as they landed to crawl into the hive."

As a new homeowner in East Point, just outside of Atlanta, the 26-year-old CNN employee didn't even want to begin to think about how much a beehive removal could cost him.

The colony built its hive in the floor joists between the upstairs and downstairs in his home. They had been sneaking in through an open seam between the wooden siding and brick foundation.

But, he felt there was nothing to bee concerned about about.

"Honey bees don't cause a lot of damage and despite honey being deliciously sweet, I was promised it naturally repels sugar-seeking insects," he said.

In late February 2020, when the weather started to warm up, Montgomery went out to mow the lawn and had to duck from all the bees swarming.

He called Georgia Bee Removal, which services much of the Southeast and got on the waitlist. Last week, Bobby Chaisson, one of three people who works at the company, came out to finally free Montgomery's bees.

It cost Montgomery less than $1,000, which gave him a more positive outlook on the situation. Chaisson got to his house around 9 a.m. and was gone shortly after noon.

With a thermal camera, Chaisson was able to find the bees with a heat map before ripping open the ceiling.

The bee vacuum sucks the bees into a special chamber with a modified shop-vac. Each chamber holds about 30,000 to 40,000 bees, and Chaisson filled three of them with the bees from Montgomery's ceiling.

After removing the hive, Chaisson said there was evidence that there had been another hive in that exact spot that had been removed years ago.

Then, Chaisson removed nearly 60 pounds of honeycomb, which was melted down into wax and donated to a local craftsperson.

The bees are settled into a new hive in North Georgia, joining more than 100 other colonies on Chaisson's property. Additionally, Chaisson's neighbor has close to 300 colonies.

"The honey did not go to a local distributor," Montgomery said. "The guy who usually takes it just got a load a few days ago and wasn't in a position to process more."

Chaisson said this happens all the time, but the honey wouldn't go to waste. He poured it into his yard, creating a golden buffet for the hundreds of thousands of bees near the property.

Montgomery is happy to be bee free -- and even got to keep some of the ceiling honey for himself.