He spent two decades in prison for church murders. New DNA evidence shows someone else did it 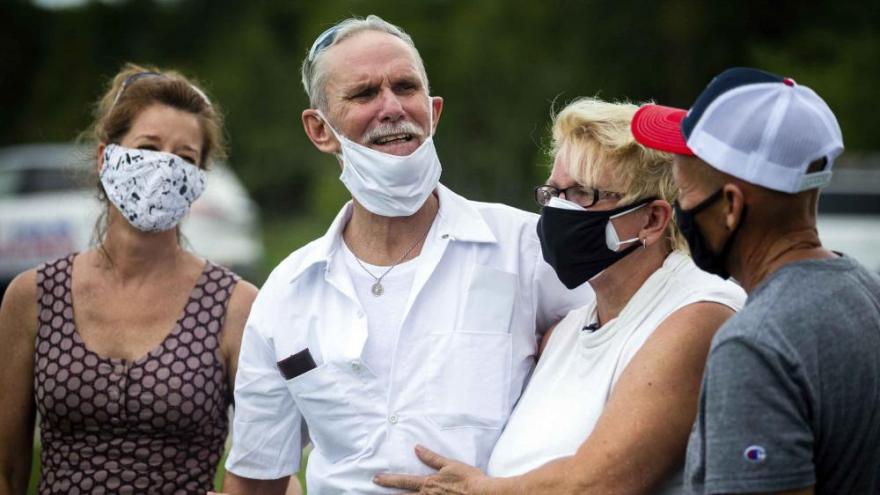 Dennis Perry, center, has been spending time at home with his wife, Brenda, right, since his release from prison one year ago.

(CNN) -- A man who spent two decades in prison for a 1985 double homicide during church bible study has been exonerated, with all charges against him dropped.

Newly discovered DNA evidence from a hair sample shows Dennis A. Perry, 59, "may have been acquitted if that evidence had been available" during his 2003 trial for the murders of Harold and Thelma Swain in Georgia, according to a news release from Glynn County District Attorney Keith Higgins.

Perry, formerly of Camden County, Georgia, was sentenced to two consecutive life sentences following his arrest in 2000. His subsequent conviction was overturned in July, and Higgins' office announced Monday that prosecutors will not re-try him.

"It took a long time, but I never gave up," Perry said in a news release Monday. "I knew that eventually someone else would see the truth, and I'm so grateful to the Georgia Innocence Project and King & Spalding [law firm] for bringing the truth to light. This indictment has been hanging over my head for over 20 years, and it's such a relief to finally not have to worry about being accused of this awful thing."

The DNA evidence involves a pair of eyeglasses found at the crime scene in 1985, according to the news release. Investigators found that the glasses had two hairs belonging to the killer, stuck in the hinges.

In February 2020, private investigators working for Perry were able to get a hair sample from a Brantley County woman who is the mother of a man implicated, but not charged, in the 1985 Swain murders, according to the district attorney's news release. Her hair sample was then examined by the same lab that did the DNA testing on the hair found in the eyeglasses in 2001 and those profiles matched, prompting the Georgia Bureau of Investigation to reopen the case in light of the new evidence.

Mitochondrial DNA testing was done using those hair samples prior to Perry's 2003 trial and excluded him as a possible contributor of the hairs; however, he was convicted using circumstantial evidence at trial, the release said.

On the evening on their murders, the Swains were in bible study at Rising Daughter Baptist Church in Waverly, according to a news release from Georgia Innocence Project.

Before 9 p.m., an attendee left the meeting and found a man inside the church's vestibule as she was leaving who asked to speak with Harold Swain, 66. She went back inside the prayer meeting to get him and left the church, Higgins' news release said. Witnesses said they heard a "scuffle" followed by four gunshots.

Thelma, 63, heard the gunshots and ran to the vestibule -- that's when the killer shot her once. By the time the other meeting attendees ran to the back of the church, the killer had left.

The case quickly went cold, Higgins' release said, but it was reopened by the Camden County Sheriff's Office in 1998, according to a release from the Georgia Innocence Project.

Within a week, authorities identified Perry as the main suspect based mainly on testimony from an informant who wanted a $25,000 reward and ultimately was paid $12,000 in exchange for testimony -- something that was never disclosed to Perry's attorneys, the release from Georgia Innocence Project said.

Higgins said he consulted with the GBI and the victim's family, and both agreed with his decision not to prosecute Perry.

"There are times when seeking justice means righting a wrong," Higgins, who took office Jan. 1, said. "While this case was prosecuted prior to my administration, the new evidence indicates that someone else murdered Harold and Thelma Swain. Mr. Perry is now, and has been since July 2020, a free man. We will continue to examine all the evidence in the case — new and old — as we determine what the next step will be in this investigation."

Rebuilding, reconnecting and adjusting from scratch

Since his release from prison, Perry has been spending time at home with his wife, Brenda, and reconnecting with friends and family, trying to recover and readjust to this new chapter of his life, the news release from Georgia Innocence Project said.

Thirty-six states and Washington, DC, have laws on the books that offer compensation for exonerees, according to the Innocence Project. Georgia isn't one of them.

The federal standard to compensate those who are wrongfully convicted is a minimum of $50,000 per year of incarceration, plus an additional amount for each year spent on death row. Of the 36 states with compensation laws, nine offer more than $50,000 per year -- including Washington, which offers $200,000 per year, according to the Innocence Project.

Late last month, Democratic Rep. Maxine Waters of California introduced the Justice for Exonerees Act, which would amend the federal statute to increase the compensation amount to a minimum of $70,000 per year.