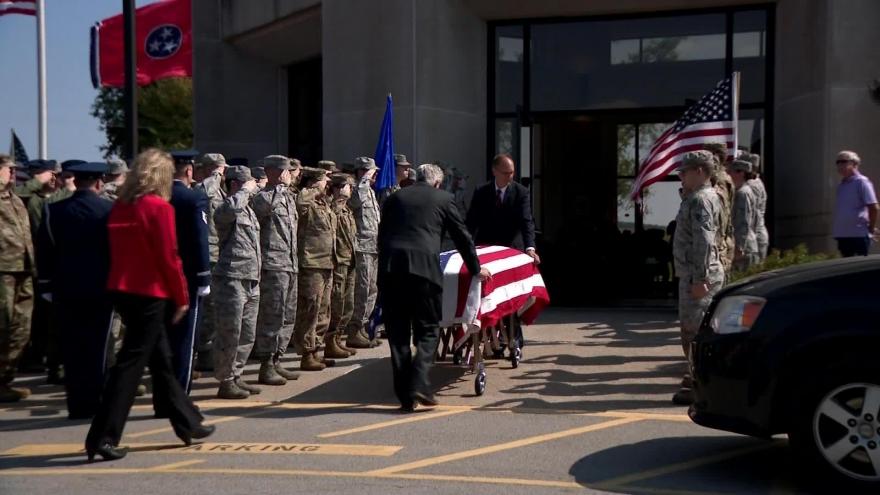 (CNN) -- United States Air Force veteran Lyndon Badgett had no surviving friends or family members when he died. But his funeral was far from quiet.

Gateway Funeral Home & Cremation Center posted on Facebook this week about an unsuccessful search for relatives of the veteran.

"Funeral Directors witness many sad occasions as they serve families in their time of grief," it said. "Among those sad situations are those people who have no family or friends."

But nevertheless, the home arranged for Badgett to receive full military honors. The Patriot Guard had also agreed to be in attendance, the funeral said. But no one expected what happened next.

Strangers packed the veteran's funeral Thursday, which was held at the Middle Tennessee State Veterans Cemetery in Nashville, CNN affiliate WTVF reported. Hundreds of fellow veterans were in attendance, the affiliate said, many of whom didn't even know Badgett's name. The crowd couldn't fit inside the chapel.

Veterans told the affiliate the story hit close to home and they didn't want to miss the opportunity to give another veteran the honors he deserved.

"I can't imagine a veteran being buried without some recognition," Army veteran Steve Quarles told WTVF. "It broke my heart."

The funeral home's post grabbed the attention of people all over the country, the affiliate reported.

"Due to the overwhelming out pour of love and support for Mr. Badgett, we have a register book in place for anyone who would like to come by to sign and pay their respects," the funeral home wrote on Facebook.