He raised a million dollars for a hospital through beer money. Then his old racist tweets surfaced 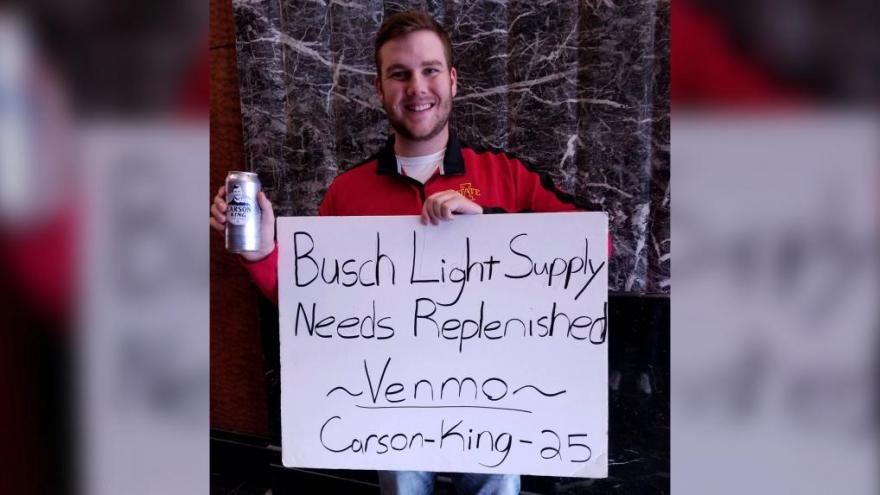 Carson King raised more than $1 million for an Iowa children's hospital, borne out of a request for beer money on national TV. But old racist tweets ended his relationship with the beer company that promised to match his fundraising.

(CNN) -- Carson King raised more than $1 million for an Iowa children's hospital, borne out of a request for beer money on national TV. But old racist tweets ended his relationship with the beer company that promised to match his fundraising.

Anheuser-Busch announced it would no longer associate with King after he admitted posting two offensive tweets in 2012 when he was a 16-year-old high school student.

"Carson King had multiple social media posts that do not align with our values as a brand or as a company and we will have no further association with him," the company said in a statement to CNN.

The 24-year-old shot to fame when he appeared on ESPN's "College GameDay" program earlier this month, holding a sign that said "Busch Light Supply Needs Replenished" with his Venmo username.

Donations poured in, and after buying one case of Busch Light, he said he decided to send the rest of money to the University of Iowa Stead Family Children's Hospital. Anheuser-Busch and Venmo promised to match whatever King could raise.

In now-deleted tweets, Busch Beer promised to send King, dubbed the "Iowa Legend," a year's supply of beer cans with his face and name on them.

Anheuser-Busch spokesperson Matt Kohan told CNN on Wednesday that the company would still donate more than $350,000 to the hospital as promised, but it had rescinded its beer offer. Instead, it will add the value of the year's supply to its donation.

The episode is being held up as the latest example of cancel culture, in which people, usually celebrities, are publicly shunned and boycotted after allegations of problematic behavior come to light.

King said a Des Moines Register reporter pointed out the tweets while interviewing King for a profile, which prompted him to hold a press conference Tuesday before the paper's story was published.

One of the tweets compared black mothers to gorillas and another joked about black people who were killed in the Holocaust, the Des Moines Register reported.

"Once he pointed it out and I went back and looked at it, I was really upset with myself," he told reporters at the conference, CNN affiliate WHO reported.

King apologized in the press conference before the paper published the profile online.

The comments were made as jokes between friends, King said in a statement on Twitter. He called the posts "an attempt at humor that was offensive and hurtful."

"Obviously I've made mistakes in my past; everyone has," he said in the conference. "And I really hope people see at this point in my life, I'm grown, I'm caring, I'm generous. I hope that's what people focus on."

Readers turned on the newspaper

The story took another turn after the paper published the profile online on Tuesday night.

Readers posted comments on Twitter questioning why the Des Moines Register had dug so far into King's life, surfacing questionable tweets from when he was a teenager.

The paper posted a statement on Twitter in response to the online backlash. They defended the reporter, Aaron Calvin, saying that looking at a person's public social media posts was a routine part of working on a profile.

"Some of the toughest decisions in journalism are about what to publish ?-- or not," Des Moines Register executive editor Carol Hunter wrote in a Tuesday statement.

"The jokes were highly inappropriate and were public posts. Shouldn't that be acknowledged to all the people who had donated money to King's cause or were planning to do so?" Hunter wrote. "The counter arguments: The tweets were posted seven years ago, when King was 16. And he was remorseful. Should we chalk up the posts to a youthful mistake and omit the information?"

The editor said the paper ultimately decided to include the information at the bottom of the story to remain transparent about what they'd found.

After the paper tweeted the statement, people on Twitter began sharing past offensive tweets by Calvin.

One of the Des Moines Register reporter's now-deleted tweets used a racial slur against black people, while others made derogatory comments against gay people, same-sex marriage and women, The Washington Post reported.

Once the posts were shared widely, Calvin tweeted, "I have deleted previous tweets that have been inappropriate or insensitive. I apologize for not holding myself to the same high standards as the Register holds others," according to a screengrab published by the Washington Post.

The paper tweeted early Wednesday morning that it's investigating the reporter's "inappropriate" tweets. The reporter's account was set to private as of Wednesday.

When contacted by CNN on Wednesday, Calvin directed questions to the paper.

Hunter, editor of the paper, declined to comment to CNN on Thursday.

Calvin's byline appeared online in the Register on Wednesday evening, after the paper had said it was investigating.

The controversy hasn't stalled donations, though. King told reporters Tuesday that he still planned to raise $2 million for the hospital.

"I'm just glad that Busch and Venmo are matching the donations and that we can continue to make a difference for the hospital," King told CNN by phone on Wednesday evening.

"We're actually at $1.5 million in donations. I'm happy that we can keep helping them, the kids and families of the hospitals," he said.

Venmo did not respond to a CNN request for comment. Reached Wednesday evening, the University of Iowa Stead Family Children's Hospital said it would not be issuing a statement at this time, though last week, University of Iowa Healthcare spokesman Tom Moore told CNN the hospital was coordinating a time for King to "bring the donation over and present the check" in early October.

"You can make a mistake in your life, and still go on to do amazing things," she tweeted. "@CarsongKing2, thank you for reminding us all of that! #IowaProud."