He lost his prosthetic leg while he was surfing. Weeks later a 13-year-old found it 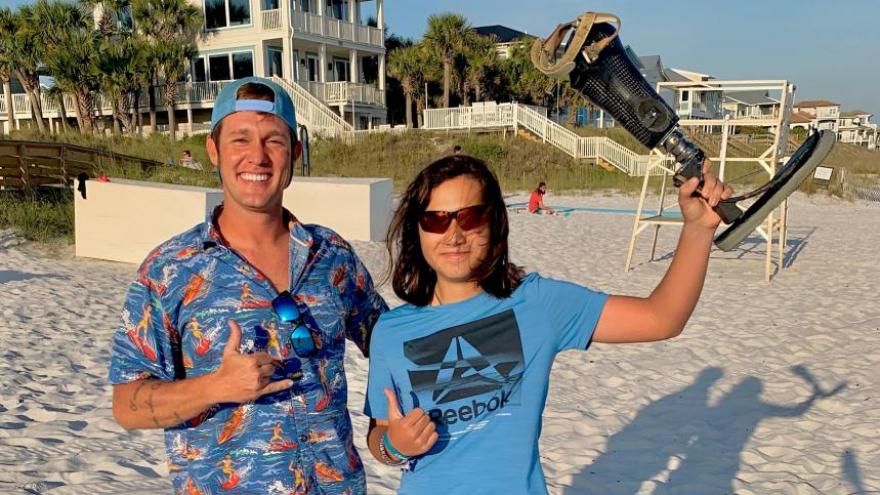 Carter Hess and Sebastian Morris met up so Hess could get his lost leg back.

(CNN) -- Finding unusual objects on a scuba dive is not uncommon, but no one prepares you for finding someone else's leg.

They were over in the jetties on May 9 when something caught his eye.

"It kind of shined... so my natural reaction is, OK, it might be treasure, so I'll go take a look," Morris told CNN.

He dove down and tried to free it from the sand. After several attempts, it was still stuck. His dad saw the struggle and came over to help. After one final tug, they realize the object they had been trying to free was a prosthetic leg.

"My first reaction was "Oh my gosh, that's hilarious!' " So many thoughts were going through my head, like how did he lose it?... What happened and why did he have a lost leg?" Morris said.

When they were heading back to the shore, Morris realizes that the leg probably belongs to someone. He decided to try and find the owner.

With the help of his dad, they start a Facebook page to spread the word. After few days, they find out the leg belongs to surfer Carter Hess.

Hess had been surfing at the beginning of April and got hit by a large wave. He told CNN that right away he knew that his prosthetic leg was gone. He and his friends went back to look for it, but without scuba gear, it was impossible to find.

Then, weeks later, something crazy happened.

"Every time a prosthetic leg gets washed up on a beach, my friends tag me in it. They think it's hilarious," Hess said.

Hess followed up with the post by messaging Morris' dad. After getting in touch with the Morrises, they decided to meet up at a restaurant to give Hess back his leg.

Morris and his mom met Hess on Wednesday at one of the newly reopen restaurants. After successfully returning the prosthetic leg, the two decided to go diving together when Morris' dad gets back into town.