He invited the public to his wife's funeral after she was killed in the El Paso shooting. Hundreds are expected to attend 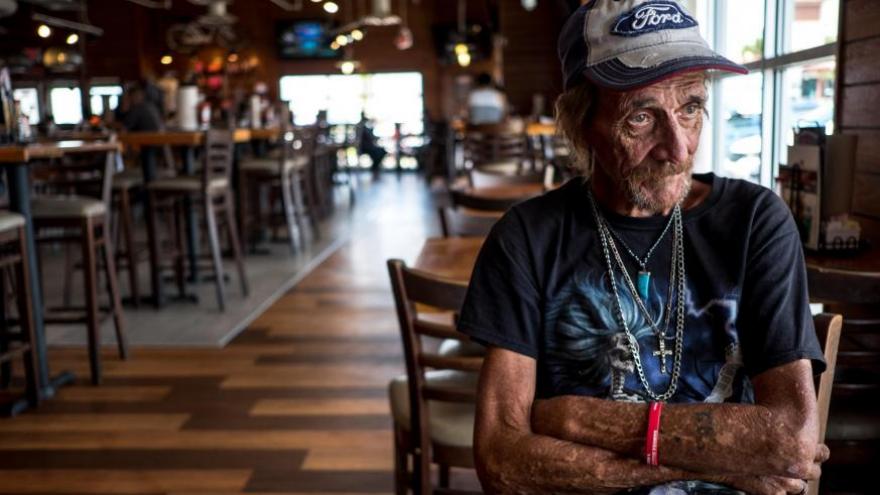 Antonio Basco said his wife, Margie Reckard, was his angel and they had a "magnificent bond" since they met.

(CNN) -- Nearly two weeks after the El Paso massacre, Antonio Basco pushed a Walmart cart full of red and pink roses, gallons of water and a wooden cross to a memorial honoring his wife and the 21 others who were killed.

Basco and his wife, Margie Reckard, 63, met 22 years ago and quickly became inseparable. She became the love of his life and his only living relative, he said. Hundreds are expected to attend Reckard's visitation on Friday evening at the La Paz Faith--Perches Funeral Home in central El Paso because the funeral home said Basco would welcome "anyone to attend his wife's services."

In the days after the massacre, Basco has visited the makeshift memorial behind the Walmart store daily. He would come and go at all hours of the day and has slept there at least one night.

He kneels in front of a white cross bearing his wife's name that is surrounded by candles and dozens of flowers. He prays for her and even talks to her.

Tony Dickey, a chaplain for Disaster and Victim Services International, said crowds of strangers have approached Basco with words of support, or simply to offer a hug.

"He was basically just mumbling to himself that he had no one anymore, that she was everything he had. He didn't know what he was going to do," Dickey said about the day he met Basco. "He kept repeating that he was going to be so alone now."

'Every second, every breath... has been a wonderful life'

Basco had just quit riding rodeo in Omaha, Nebraska, when he met Reckard at a bar. She was originally from the Washington, DC, area. Basco is from Louisiana.

He says Reckard had been smiling at him that night but he was so shy he couldn't talk to her. At some point Basco finally approached her. What started as a drink and a friendly conversation turned into a dinner and later into their first time sharing breakfast.

"Me and my wife had a bond, a magnificent bond," Basco said. "I never felt anything like that in my life."

Soon, they hopped on a train together with nothing more than a backpack.

"Every second, every breath... has been a wonderful life," he said.

The couple traveled around the country until they eventually settled in El Paso. They took care of each other as they grew older and as Reckard began battling Parkinson's disease.

"We never went to bed mad at each other without saying good night or I'm sorry," he said. "We planned on living together and dying together."

Rico Duran, 22, an in-home care provider who had been working with the couple, said they'd spend their days watching old school cowboy movies or sometimes cruising around town in their blue SUV.

Reckard was really active, Duran said, and wouldn't ask for help, even though she had to use a walker to move around. Reckard and Basco were always smiling and striking up conversations even if there was a language barrier, Duran said.

"They have so much love for the Chicanos and overall the people in the city," Duran said. "They didn't know Spanish but they were always making an effort to communicate with Spanish speakers."

El Paso is becoming his family

Basco was doing maintenance on the SUV outside their home on August 3 when Reckard left for Walmart. It was his wife's Saturday routine to go to the store near Cielo Vista Mall to shop for groceries, he said.

A gunman opened fire inside the store, taking the lives of 22 people and wounding at least two dozen. Reckard died in the largest massacre the city has seen.

Basco searched for Margie in local hospitals for hours, hoping to reunite with her, but the medical staff wouldn't tell him anything. It wasn't until Sunday that law enforcement officers contacted Basco and "told me that my wife had been murdered," he said.

His wife who had been his angel, his partner and, without a doubt, the love of his life was not returning home.

"I don't need anything," he said. "I need her and I keep begging her to come back but I know it's impossible."

Dozens of people in El Paso have joined him at the memorial for days. A local broadcast journalist, Carlos Armendáriz, had been visiting the memorial with his family when he spotted Basco and took a photo of him that he later posted on social media. After seeing that many people were sharing Basco's photo, he set up a GoFundMe page for him.

"My intention was that people can help him as much as they can," Armendáriz told CNN.

On Wednesday, Armendáriz made sure that Bascos opened a bank account to receive the donations.

"Overcoming the loss of a loved one is difficult for anyone, just imagine how difficult is for an elder man like him," he said.

Jorge Ortiz, the general manager of Perches Funeral Home, said it's unclear how many people will attend the funeral but that more than 60 people have already called to order flower arrangements.

As his wife's funeral approaches, Basco, who is still wearing his blue Ford Motor cap and his silver wedding band, said he's thankful for all the families and individuals who've reached out to him.

"If it wasn't for all of these people, I don't know how I would make it," Basco said.

On Wednesday, Basco said he was not ready to learn how to live by himself. He was planning to pay a few house bills, feed his cat, Princess, and come back once again to water the flowers at the makeshift memorial and give his wife's cross another kiss.