He fought in the D-Day invasion. With no family left when he passed away, hundreds gathered to honor him. 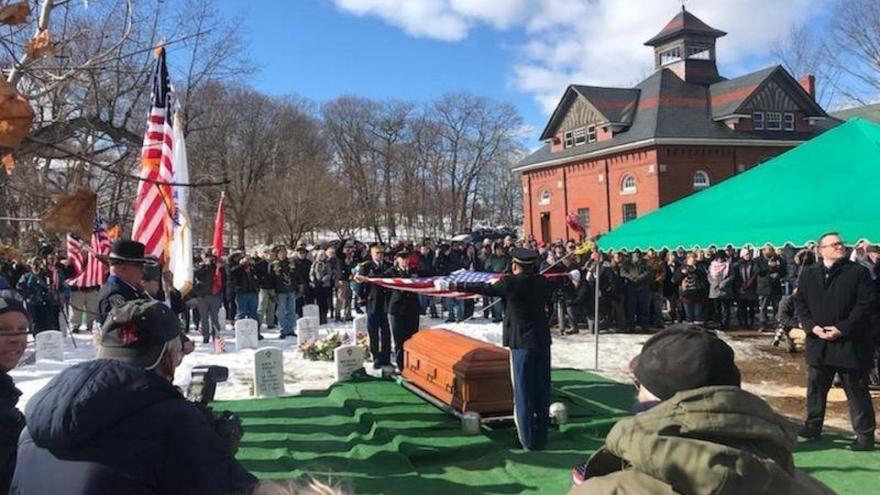 Hundreds attended James McCue's funeral on Valentine's Day. When 97-year-old veteran James McCue passed away, he had no surviving members in his family. But he had hundreds of guests honor him in his funeral .

(CNN) -- When 97-year-old veteran James McCue passed away, he had no surviving members in his family. But he had hundreds of guests honor him in his funeral Thursday.

McCue was born and raised in Lawrence, Massachusetts, and served in the US Army during World War II.

Massachusetts Secretary of Veterans' Services Francisco Urena urged community members to attend, when he found out there was no family left to come to McCue's services.

"We're grateful for his service," he said in a tweet.

The city joined in on efforts to spread the word, encouraging other veterans to attend the service. And sure enough, hundreds canceled their Valentine's Day plans to come by the funeral and bid McCue goodbye.

"Thank you for honoring an American hero," the Quincy Police Department tweeted.

The Lawrence Police Department said on social media it was "honored to take part in the funeral services.... with full military honors."

"Please get to know a Veteran of any era, especially WWII, Korea & Vietnam while they are still amongst us," Urena said on Twitter. "Say Thank You for your Service as a start of a conversation."

McCue was laid to rest at the veterans' lot in Bellevue Cemetery.