Have a gun in your home? Here's how to help reduce the risks for kids 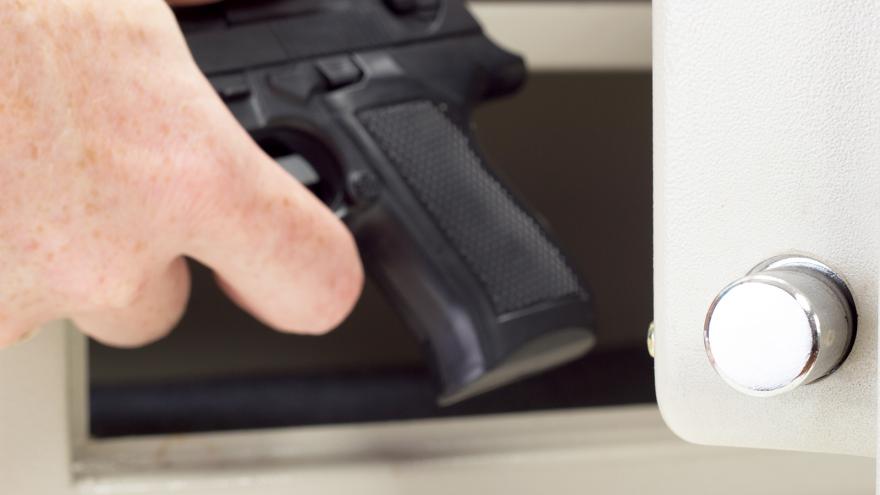 Editor's note: If you or someone you know is struggling with suicidal thoughts or mental health matters, please call the National Suicide Prevention Lifeline at 1-800-273-8255 to connect with a trained counselor or visit the NSPL site.

(CNN) -- When kids and teenagers have easy or unsupervised access to guns, bad, and often irrevocable, things can happen.

Such is the case with Ethan Crumbley, according to Oakland County Prosecutor Karen McDonald. The 15-year-old Crumbley is the suspect in the November 30 Oxford High School shooting in Michigan that left four students dead, and six other students and a teacher injured by gunfire, according to authorities. Prosecutors allege the weapon used in the shooting was purchased by Crumbley's father four days prior and that it was stored in an unlocked drawer. Crumbley and his parents,James and Jennifer Crumbley, have pleaded not guilty to all charges against them.

"A key takeaway from this is that we have a responsibility as gun owners to ensure that guns are not being accessed by teens and youth who may be unsupervised. Guns are exceptionally lethal," said Cassandra Crifasi, deputy director of the Johns Hopkins Center for Gun Violence Prevention and Policy. "I hope that -- while this is a terrible tragedy -- parents who have decided to have guns in the home with their children will take this as a warning."

Since kids are naturally and exceptionally curious, impulsive and defiant, just hiding your gun isn't a sufficient precaution, experts say.

"Their brains are developing," said Crifasi, who is also an assistant professor of health policy and management at the university. "That same curiosity that can inspire them to pick up a book and want to learn how to read can inspire them to go looking for a parent's gun."

People "greatly underestimate the probability of risk of their behaviors. And they overestimate the effectiveness of their communications that they're warning to their children, and their children's understanding of them," said Linda A. Teplin, the Owen L. Coon Professor of Psychiatry and Behavioral Sciences at Northwestern University's Feinberg School of Medicine.

Even children as young as 2 or 3 can be strong enough to pull a gun's trigger, said Dr. Lois Lee, an associate professor of pediatrics and emergency medicine at Harvard Medical School.

The American Academy of Pediatrics advises that when it comes to preventing firearm-related injuries, the safest home for a child is one without guns. But if you are going to have a firearm in your home, here's what experts recommend to help mitigate some of the risks.

In the United States, firearm-related injuries were among the five leading causes of death in 2019 for people ages 1 to 64, according to the US Centers for Disease Control and Prevention -- others in the top five included heart disease and cancer. A study published in 2018 in the New England Journal of Medicine found that death by gunshot was the second-highest cause of death in the US in 2016 among children and adolescents, ages 1 to 19.

An estimated 4.6 million kids live in homes with unlocked, loaded guns, according to the AAP. Last year, there were at least 369 unintended shootings by children in the US, 142 of which resulted in death while 242 caused injuries, according to the AAP. In the past decade, 9 in 10 kid and teen deaths by suicide that involved guns were with a firearm accessed within their own or a relative's home, the AAP says.

"You tell kids, 'Hey, don't do something,' they're going to think, 'Hmm, maybe that sounds like a good idea to try,'" Crifasi said. "Even if we teach them the right way to handle a firearm, or even if we teach them not to touch them if we're not around -- if kids could be totally trusted to make good choices for themselves, they wouldn't be living with us until they were 18, right?"

Many parents and caregivers think their kids don't know where their guns are stored, but research has shown most kids know the hiding place, Crifasi said. Understanding this can be especially important if your kids are showing risky behaviors, such as impulsivity, or going through hard times. If a teen is experiencing a mental health crisis, bad grades or a breakup, firearm access can lead to increased risk of a fatal suicide, Crifasi said.

Guns should be unloaded and locked in appropriate safes or lock boxes for handguns, with ammunition locked in a separate safe, the AAP recommends. Don't keep loaded, unlocked guns in your car or anywhere else on your property, either, according to AAP. Some states have laws that require safe storage of guns at all times or in certain circumstances, such as if you live with someone under age 16 or someone who isn't legally allowed to own or possess a gun.

Access codes, combinations or the location of keys should be kept preferably in your head, or somewhere else your kids wouldn't find it, Crifasi said. Only gun owners should know the codes or location of the keys.

Concerns that safe storage means not being able to quickly defend your family during invasion emergencies is valid, Lee, who is also a pediatric emergency medicine physician at Boston Children's Hospital, said. But studies have shown that in homes with guns, the risk of someone in the home dying from gunshot is significantly higher than the likelihood of a home invasion and having to defend yourself from the invader, she added.

What you can do is get a quick-access safe, Crifasi suggested. "I have one bolted to my bed frame; I can access it in a matter of seconds if I needed to," she said. "But I know that it's safe and secure because it's got a key code and it's bolted down so people aren't going to be able to walk away with it.

Some quick-access safes have fingerprint security so that you can instantly unlock it, but sometimes technology fails, Crifasi said.

What your kids should know

Teach your children gun safety: "Guns are tools, not toys, and you wouldn't go and touch the chainsaw without permission," Crifasi said you could tell your children.

Be honest. Explain that the gun violence they often see on television, movies and video games is not real, the AAP says. Say that in real life, guns are dangerous weapons and must be respected for what they can do, Teplin said -- the Oxford High School shooting is one example you could use.

As with anything else, children are always observing their parents' behaviors, so model the behavior you want to see, Crifasi said. Don't joke about guns or let a kid take a turn shooting while you're hunting or doing target practice. Before setting your gun down, unload it, the AAP says.

"Talk to them about never pointing your gun at something they're not willing to destroy, for lack of a better term, because if it was loaded and discharged, you would likely destroy whatever that gun was aiming at," Crifasi said.

Dealing with other parents

If your children are going to visit the homes of people who might have a gun, add questions about gun safety to your playdate checklist, the AAP recommends.

"People can feel awkward about it, but really, when it comes down to the safety of our kids, we have to have those conversations," Crifasi said. "If your child has a peanut allergy, would you be uncomfortable asking the parents of your kid's friends to not give your kid peanuts? No, that would be something you'd absolutely do because it puts your kid at risk."

Tell the parents you want to talk about home safety: Do you have any guns in your home? Can you tell me how they're stored? If the other parents don't want to have those conversations, suggest their kids come over to your house instead, Crifasi said.

"I would not allow my child to visit a household that had guns in the home that were not locked up," Teplin said.