Harvey Weinstein, in a wheelchair, pleads not guilty to sexual assault charges in Los Angeles 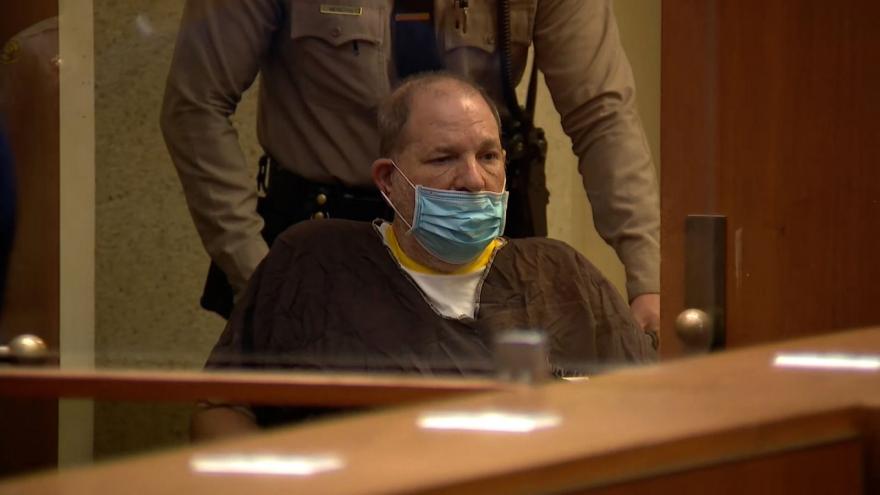 (CNN) -- Disgraced movie producer Harvey Weinstein pleaded not guilty to 11 sexual assault charges in a Los Angeles courtroom on Wednesday, a day after he was moved across the country from his New York prison.

Weinstein, 69, appeared in a wheelchair in the hearing, while a medical mask covered his mouth and sat under his nose.

His use of a wheelchair reflects what his attorneys have said is his deteriorating physical health in recent years. During his criminal trial in New York early last year, he arrived to court each day using a walker, and he appeared at his sentencing in March 2020 in a wheelchair.

In the short court hearing Wednesday, Weinstein did and said little. His lawyers filed a motion to dismiss three of the 11 counts against him, saying the statute of limitations has expired. The attorney also requested a medical evaluation, which the judge granted.

His next court appearance is July 29.

"He absolutely, unequivocally and categorically denies the allegations in this indictment," said Mark Werksman, Weinstein's lawyer. "They're unprovable, unproven, uncredible, and unsubstantiated, and that will become clear as we litigate this case."

Weinstein is going blind in one eye and is in a wheelchair for issues related to his spinal stenosis, the attorney said.

"They made representations to the court that they would attend to his medical needs and we expect them to," Werksman said. "And we've asked the judge to order that they do and I expect that they will."

Gloria Allred, who represents two of the victims in this case, took issue with Werksman's comments about the allegations in the indictment.

"Allegations of sexual assault and rape do take a long time to report, so the idea that they may not have disclosed to a law enforcement officer for many years does not mean that those are not credible," she said.

She wants Weinstein to get all the medical care he is afforded. "We want him to be in good shape for the trial."

Weinstein is serving a 23-year sentence

The court hearing comes nearly four years after investigative stories by The New York Times and The New Yorker revealed Weinstein's alleged history of sexual abuse, harassment and secret settlements as he used his influence as a Hollywood power broker to take advantage of young women.

The revelations led to a wave of women speaking publicly about the pervasiveness of sexual abuse and harassment in what's known as the #MeToo movement.

Weinstein was found guilty last year in New York of first-degree criminal sexual act and third-degree rape and is serving a 23-year prison sentence at a maximum security prison outside of Buffalo. He did not testify in his own defense, but at his sentencing last March he offered an unexpected, rambling speech that oscillated between remorse, defense of his actions and confusion.

"I'm not going to say these aren't great people, I had wonderful times with these people, you know," Weinstein said of the women who accused him of assault. "It is just I'm totally confused and I think men are confused about all of these issues."

Due to his declining health, his attorneys have decried the lengthy prison term as a de facto life sentence. His legal team filed an appeal earlier this year, saying a biased judge and a biased juror tainted the trial.

Last month, a New York judge approved his extradition to Los Angeles County for him to face further charges.

He was originally charged in Los Angeles County in January 2020 with sexually assaulting two women in separate incidents over a two-day period in 2013. In April, prosecutors added an additional charge that stems from an alleged incident at a Beverly Hills hotel in May 2010, and in October prosecutors added six new charges.

He has denied the allegations, according to his spokesman Juda Engelmayer.