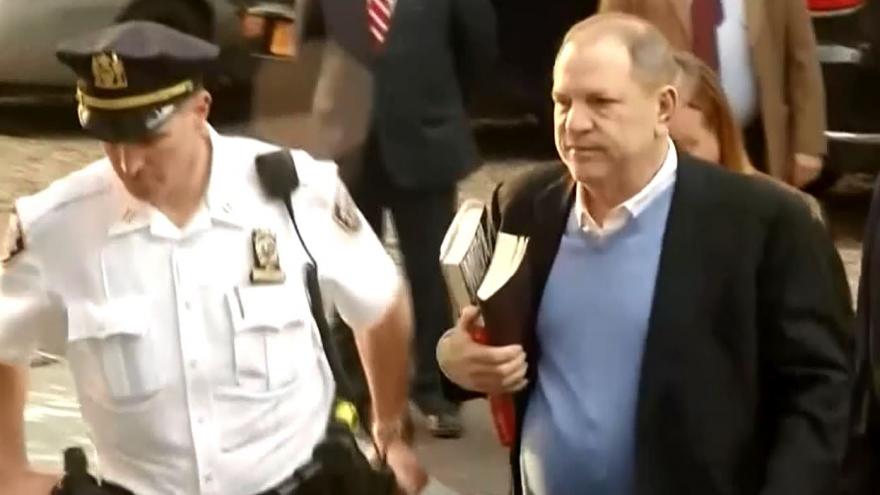 Harvey Weinstein has arrived at a police station in New York where he is expected to surrender himself to face criminal charges in a sexual assault probe.

Weinstein stepped from a black SUV and walked slowly into a Manhattan police station before a crowd of news cameras. He didn't answer respond to shouts of his name.

Two law enforcement officials told The Associated Press the case includes a woman who has said Weinstein forced her to perform oral sex during a meeting at his office in 2004.

The woman, Lucia Evans, (LOO'-sha) was among the first to speak out about the film producer.

An official says the charges are likely to include one other victim who has not spoken publicly.

The officials spoke to the AP on condition of anonymity because they weren't authorized to discuss the investigation.

Lawyers for the film producer have said all allegations that he forced himself on women were "entirely without merit."

Harvey Weinstein is expected to turn himself in to police in New York City Friday morning following a seven-month investigation into sexual assault allegations.

Two law enforcement officials say the charges are related to a former actress, Lucia (LOO'-sha) Evans, who says Weinstein assaulted her in 2004. One official says it's likely the case also will include at least one other victim who has not come forward publicly.

The two officials spoke to The Associated Press on condition of anonymity because they weren't authorized to discuss the investigation.

The criminal charge against the film producer would be the first since scores of women began coming forward to accuse him of sexual misconduct.

Weinstein has repeatedly said he didn't have nonconsensual sex with anyone.