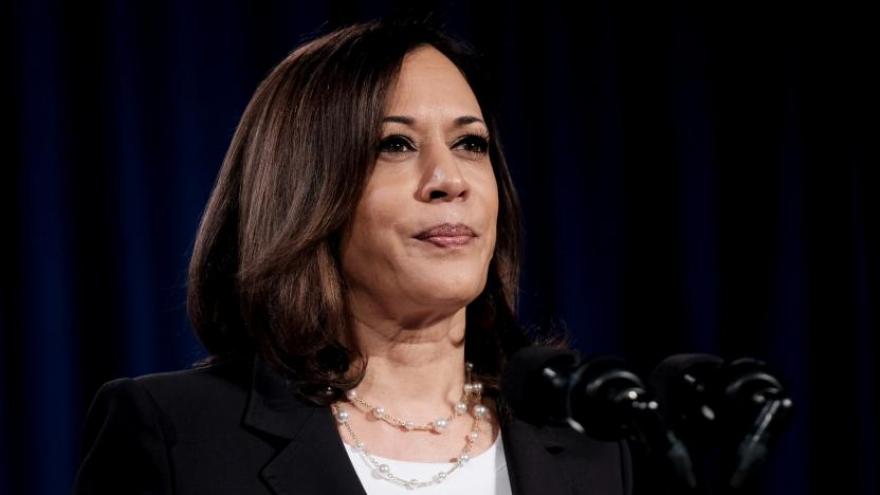 Kamala Harris will be sworn in Wednesday as the next vice president of the United States by Supreme Court Justice Sonia Sotomayo. Harris is shown here delivering remarks during a campaign event on August 27, 2020 in Washington, DC.

(CNN) -- Kamala Harris will be sworn in Wednesday as the next vice president of the United States by Supreme Court Justice Sonia Sotomayor, according to a Harris aide.

Harris will make history as the first female, first Black and first South Asian vice president, and she will be sworn in by the first Hispanic and third female justice in US Supreme Court history. Sotomayor was nominated by President Barack Obama to the high court and has served since 2009.

The vice president-elect will take her oath of office using two Bibles; one that previously belong to a former neighbor and family friend of Harris,' Regina Shelton, and another that belonged to Thurgood Marshall, the first African American to serve on the Supreme Court, the aide said.

ABC News was first to report the Bibles and that Sotomayor would swear Harris in.

Harris has described Shelton as a second mother to her, and she and her sister Maya often visited Shelton's house after school while their mother, the late Shyamala Gopalan, was still at work as a breast cancer researcher. Shelton lived two doors down from Harris' home. Harris used Shelton's Bible to take the oath of office to be attorney general of California and later to become a United States senator.

"In office and into the fight, I carry Mrs. Shelton with me always," Harris wrote in an op-ed for Bustle about Shelton titled, "Without This Woman, I Wouldn't Be The Senator I Am Today."

"Mrs. Shelton would bring her Bible to church every Sunday," Harris wrote. "Sitting alongside her, I was introduced to the teachings of that Bible. My earliest memories were of a loving God, a God who asked us to 'speak up for those who cannot speak for themselves' and to 'defend the rights of the poor and needy.' This is where I learned that 'faith' is a verb, something we must live and demonstrate through our actions."

Harris has often said that Marshall was one of the inspirations for her legal career and has described him as a "childhood hero of mine."

The vice president-elect said in a video posted to Twitter in July, "Thurgood Marshall and the work that he did is ... really one of the main reasons I wanted to be a lawyer. Thurgood was a fighter, he was a boxer in the courtroom."

"As a daughter of parents who were active in the civil rights movement, I knew that the fight for civil rights, the fight for equality, the fight for justice is going to take place in many ways, but one of the most significant ways (is) by lawyers understanding the power of their advocacy to make change and to make reform happen," Harris continued.

President-elect Joe Biden and Harris will take their oaths of office on the West Front of the US Capitol during a significantly scaled-down event on January 20.

Authorities are bracing for more extremist violence in the coming days after supporters of President Donald Trump stormed and breached the US Capitol on January 6 in a violent riot that left five people dead. The National Park Service announced Friday that the National Mall will be closed to the general public on Inauguration Day due to security concerns.

Asked about the safety concerns taking the oath outside, Harris told NPR in an interview: "I think we cannot yield to those who would try and make us afraid of who we are."

Biden's inaugural committee will be hosting several virtual events surrounding the inauguration, including a virtual parade after the swearing-in ceremony on Inauguration Day in part to keep crowds to a minimum amid the coronavirus pandemic.