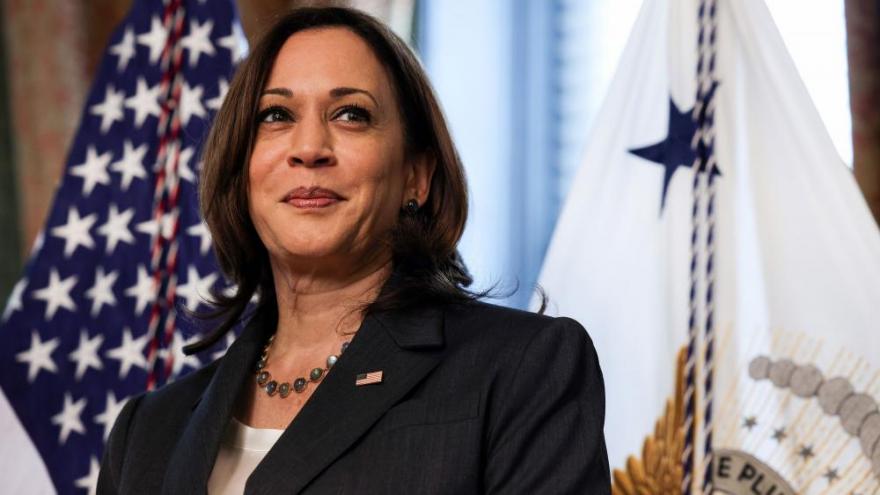 (CNN) -- Six months after being tapped to lead the White House's National Space Council, Vice President Kamala Harris will announce the council's first meeting of the Biden administration during a visit Friday to NASA's Goddard Space Flight Center in Maryland.

The meeting will be held on December 1, according to a White House official, a full year after the council's final meeting of the Trump administration.

Friday's event will mark the first time the vice president has delivered a speech centered entirely around space. Harris' primary objective, according to a White House official, will be to "underscore how the U.S. is harnessing the nations' space program to combat the climate crisis and protect vulnerable communities."

Central to that mission is NASA's newly launched Landsat 9 satellite, the latest in a series of satellites that have provided nearly a half-century's worth of continuous data on Earth's forests, farms, freshwater systems and oceans. Harris will present "the first imagery returns" beamed back from Landsat 9 during her Friday tour.

Space is one of the few areas iwhere the Biden administration has maintained most of the policies of the previous administration -- from retaining the National Space Council to supporting the Space Force and NASA's Artemis program, which aims to return American astronauts to the moon by 2024.

When asked in March if President Joe Biden agrees with most of his predecessor's space policies, White House press secretary Jen Psaki replied, "That sounds accurate to me."

But the Biden administration has been far more focused on using space to combat climate change, while the Trump administration largely aimed to retain "American dominance in space" and championed commercializing it.

"This is the tipping point in the space economy. This is like 1998 for the internet," said Greg Autry, a professor of space policy and business at Arizona State University who applied to be a member of the National Space Council's Users Advisory Group. "Imagine where we would be if we only viewed the internet as a scientific tool instead of the brilliant choice by the Clinton administration to view it as an e-commerce tool."

The Users Advisory Group is comprised of nearly 30 private sector executives who advise the government. Chirag Parikh, the executive secretary of the National Space Council, announced in August that the administration will be revising its charter and membership "to make sure it reflects the priorities of the vice president and this administration."

"This administration is taking space very seriously," Parikh said while speaking at the annual Space Symposium in August. "The vice president has made it clear that space is a priority for her."

So far, Harris has met with the leaders of five countries -- Australia, India, Japan, Singapore and Vietnam -- to discuss international cooperation in space. She's also participated in a YouTube original film focused on space, called "Get Curious with Vice President Harris."

Still, Sen. Jerry Moran, a Kansas Republican who sits on the Space and Science subcommittee, criticized Harris, saying she has not shown enough interest in leading the National Space Council and "should step down and allow a strong space advocate to take on this important leadership role."

"In a domain as competitive as space, each month that passes is imperative as we are actively working together -- government and industry -- to ensure the United States remains a leader in the space arena," Moran told CNN in a statement. "Our adversaries are not resting, and neither should we."

CNN has reached out to the vice president's office for comment.

Democratic Colorado Sen. John Hickenlooper, who chairs the space and science subcommittee, "looks forward to working with the National Space Council to minimize orbital debris and develop space traffic rules for the road," according to a statement from his office that did not comment on the delay in the council's meeting.

And Wyoming Sen. Cynthia Lummis, the top Republican on the panel, told CNN in a statement that she was "glad to hear that they've schedule the next meeting of the council" and that she's "concerned that the U.S. is lagging on leadership in space overall."