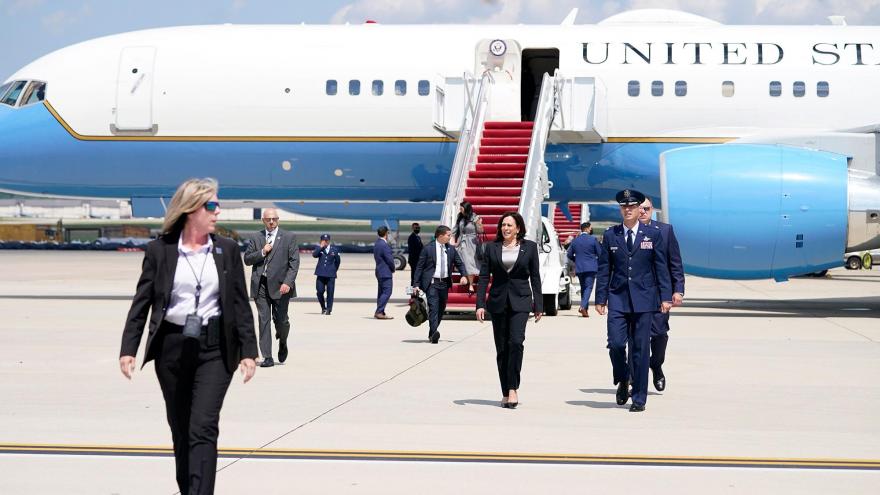 Vice President Kamala Harris deplanes Air Force Two after a technical issue forced the aircraft to return and land at Andrews Air Force Base, Md. on June 6 as she was en route to Guatemala City.

(CNN) -- Vice President Kamala Harris, who was en route to Latin America on Sunday, safely returned to Joint Base Andrews after her plane had a "technical issue," according to Harris' chief spokesperson and senior adviser Symone Sanders.

"It is a technical issue. There are no major safety concerns," Sanders said, adding that the vice president would be switching planes to continue the trip.

A spokesperson for the vice president declined to provide additional comment.

The print pooler on board Air Force Two reported that "there was an unusual noise that came from the landing gear when we took off but the landing back at JBA was completely normal."

"Everybody good?" she asked reporters. "I'm good, I'm good. We all said a little prayer but we're good."

Harris boarded a new Air Force Two at 4:19 p.m., per the print pooler, and the plane departed shortly after, putting Harris two hours behind schedule.

Harris will be in Guatemala and Mexico this week, her first foreign trip as vice president, amid political pressure to stem the flow of migrants to the US.

The stakes are high for Harris as she enters the international stage against the backdrop of a growing number of migrants arriving at the US-Mexico border. In April alone, US Customs and Border Protection encountered more than 178,000 migrants, 44% of whom were from Central America.