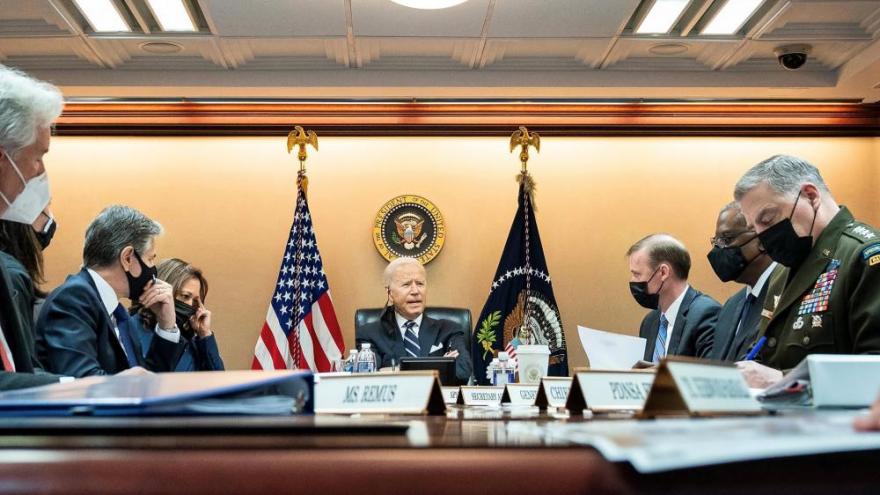 President Joe Biden and Vice President Kamala Harris are briefed by their national security team on the evolving situation in Afghanistan on Wednesday, August 18.

(CNN) -- Vice President Kamala Harris faces a steep challenge next week when she travels to Singapore and Vietnam, as a once-low-risk trip to friendly nations comes at the same time as a bungled US withdrawal from Afghanistan.

Harris will have dual responsibilities largely unfamiliar to her in the seven months she's been in office: Deliver a foreign policy win for an administration in crisis and embody Biden's call to pivot US foreign policy focus to counter a rising China. Allies and experts say Harris will now face enhanced pressure to convey to the Southeast Asian nations that the US is sincere in its long-term commitment to the region, as well as convincing them of US competence.

"She takes everything very seriously," a source close to Harris told CNN. "So, at this moment, with what is happening in Afghanistan, I think she'll even be doubly prepared because she knows what's at stake. People are going to look at this international trip as a lot more than just Singapore and Vietnam. Now, it's 'Is America going to reassert itself?'"

After departing Washington on Friday, Harris will land in Singapore on Sunday before traveling to Vietnam later in the week. On Monday in Singapore, she will meet with US sailors aboard the USS Tulsa in a visit to Changi Naval Base, becoming the highest ranking official to address troops in person as the crisis in Afghanistan plays out, an official said. The vice president will also visit troops after her time abroad, delivering remarks to servicemembers stationed at Joint Base Pearl Harbor-Hickam in Honolulu, Hawaii.

White House officials say Harris' overarching mission is to shore up relationships with regional partners. She will focus on regional security issues amid concerns over China's territorial claims in the South China Sea; economic priorities, including supply chain issues like global chip production; climate change; and the Covid-19 pandemic.

To prepare for her trip, Harris held separate phone calls with Secretary of State Antony Blinken and Secretary of Defense Lloyd Austin, who both traveled recently to the region, according to a senior White House official. And she spoke with former Secretaries of State Hillary Clinton and Madeleine Albright, the official told CNN exclusively.

Officials say Harris will remain engaged on the issue of Afghanistan on her trip to Singapore and Vietnam as she seeks to show the US' commitment to the Indo-Pacific region. There was no discussion about postponing the trip, officials said, after the fall of Kabul.

"Given our global leadership role, we have interests and strategic imperatives all across the world. And this trip is an important part of that, which is why the vice president is still going," Symone Sanders, Harris' chief spokesperson and senior adviser, told CNN. "This trip will have deliverables, but the most important is strengthening and deepening our partnerships in the region."

The long-awaited turn toward China

The American withdrawal from Afghanistan comes as the Biden administration has sought to focus its global priorities on countering autocracies like China and Russia.

Much of the administration's work has concentrated on deepening regional partnerships, including with Japan and South Korea, to present a united front regarding China, a message Harris' trip is likely to reinforce.

"A key pillar of our China policy is to work our partners and allies, which is what we have been doing since day 1 of the administration," a senior administration official said. "We are working with partners and allies to uphold the international rules-based order so it can continue to provide security and prosperity for American workers and families and for people around the world.

President Joe Biden has centered his domestic economic policy agenda around beefing up the country's infrastructure and manufacturing ability to compete with China, making it no secret he intends to fight the battles of the "next 20 years," instead of the last, a part of his reason for withdrawing from Afghanistan.

But following a chaotic drawdown in Afghanistan that has, at times, echoed images from the Vietnam War, allies around the globe have been left questioning US competence and commitment.

"The question that Asians always want to know is, 'Is America really committed to the Asia Pacific?'" Evan Medeiros, former special assistant to President Barack Obama and senior director for Asian affairs at the White House's National Security Council, told CNN in an interview.

He added, "Are (America's) actions consistent with its rhetoric, and when is the United States finally going to begin devoting the kind of time, energy, resources and leadership to Asia it's been talking about for almost a decade now?"

Medeiros said Harris' will be responsible for convincing the leaders of both countries that the time is now.

There will also be heightened pressure on Harris given the negative reviews from her first foreign trip earlier this year. In June she visited Guatemala and Mexico in her diplomatic role to find solutions to stemming the flow of migrants to the U.S. from Central America. But the trip's mission was overshadowed by self-inflicted wounds from Harris, including a high-profile interview in which she fumbled an answer about visiting the U.S.-Mexico border.

Harris' allies have argued this trip offers the vice president another chance to boost her foreign policy portfolio.

"I think this presents an opportunity to kind of lead in a space that she hasn't led before," a source told CNN.

Harris will become the first sitting vice president to visit Vietnam. A daughter of Indian and Jamaican immigrants, she also goes as the first US Black and South Asian vice president.

Officials say Harris will look to strengthen relationships with partners in the region, meeting with government officials in Vietnam and Singapore, including a bilateral meeting with Singapore's Prime Minister Lee Hsien Loong and a courtesy call with Singapore President Halimah Yacob on Monday. She will also engage with members of the private sector and civil society leaders -- a similar blueprint to her trip to Central America.

In Singapore, she will deliver a major speech on the importance of partnerships in Southeast Asia and the Indo-Pacific, a similar theme to her commencement speech for the United States Naval Academy where she touched on some of the biggest threats to the nation and its armed forces, including the pandemic, cybersecurity and climate in the context of economic security.

Trade will also factor into the theme of global competition on the vice president's trip, as the U.S. grapples with the global microchip shortage.

In Singapore, Harris will participate in a roundtable on supply chains aimed at tackling resilience, as well as meet with US embassy staff and families and hold a press conference.

The vice president will also meet with government officials in Vietnam as she seeks to share the Biden administration's vision for a free and open Indo-Pacific, her office said, raising security issues, including in the South China Sea.

"Both Vietnam and Singapore are quite anxious about what China is doing in the South China Sea, and Vietnam is also worried about what China's doing in the Mekong River. So, she's gonna want to show that, you face challenges from China, but we have your back," Murray Hiebert, a senior associate of the Southeast Asia Program at the Center for Strategic and International Studies, told CNN.

Harris will also focus on the Covid-19 pandemic. In Vietnam on Wednesday, she will give remarks at the launch of a US Centers for Disease Control and Prevention Southeast Asia regional office -- though an official declined to say whether a new shipment of vaccines from the US to the area is in the works -- and on Thursday will meet with community leaders driving social change. Harris will also witness a US embassy lease signing event, then meet with US embassy staff and families and take questions from the press.

Foreign policy experts who spoke to CNN say that the timing of Harris' trip, coming seven months into the administration, will help bolster her case to leaders and send a clear sign to Asian leaders of the administration's commitment. Biden's Asia strategy has been criticized for underinvestment, prompting two high-profile visits to the region by Blinken and Austin to try and assuage those concerns. The Defense secretary visited Singapore, Vietnam and the Philippines in late July.

"You've got to wonder why the Vietnamese and Singaporeans are getting two visits in a month," Hiebert told CNN, calling the two countries the poster children of the region.

Officials say Harris' previous engagement on foreign policy as vice president, having held more than a dozen phone calls and talks with world leaders -- including India's Prime Minister Narendra Modi and South Korea's Moon Jae-in, as well as others -- have prepared her for the moment.

"This trip is a physical demonstration of the role that she plays," the senior White House official said.

While she travels in Asia next week, Afghanistan will likely remain at the forefront of the administration's focus back in Washington. Officials say the vice president will be briefed regularly on the situation in Afghanistan while abroad and will remain engaged with the interagency discussions in the administration.

The vice president has received several briefings alongside the President as the precarious situation in Afghanistan unfolded, featured in photos of both in-person and virtual briefings over the past week.

In April, Harris told CNN's Dana Bash that she remains the last person in the room when big decisions are made -- including, she said, when Biden decided earlier this month to withdraw all US troops from Afghanistan by the 20th anniversary of the September 11 terrorist attacks.

But officials declined to say whether she was present for last week's national security team crisis meeting convened by Biden, during which he was first briefed on the plan that had been drafted to draw down embassy personnel and send in US forces to facilitate that effort because of the Taliban's rapid gains.

And though guidance was initially given to the press that Harris would appear at the President's address to the nation following the fall of Kabul, she was notably absent. It was later revealed that she remained behind the scenes, watching his speech from another room in the White House.

"I do know that Joe Biden seeks her counsel in these big moments and these big decisions," a source familiar with the dynamic said. "He's always sought for her to be part of the decision-making process."

Harris' allies note that -- as a part of the Senate Intelligence Committee -- she's not new to the intricacies of the Afghanistan war. In 2018, Harris visited troops in Afghanistan as a part of a congressional delegation.

Halie Soifer, a former national security adviser for Harris in the Senate, said she looks at this trip as a continuation of her former boss' experience.

"She definitely understands and is steeped in the importance of diplomacy, and building and strengthening our global alliances," Soifer told CNN. "She will reassure regional leaders of America's role."

But risks lie ahead for the vice president as she becomes the administration's highest-ranking official to travel abroad since the fall of Afghanistan.

"Foreign travel is one of the times where presidents are very visible. And they're also more exposed," said Joel Goldstein, a vice presidential historian. "So, there's likely to be some occasions when she'll be asked about Afghanistan, and vice presidents speak with a large microphone, so there'll be attention to what she says, in a way that there isn't with many other officials."