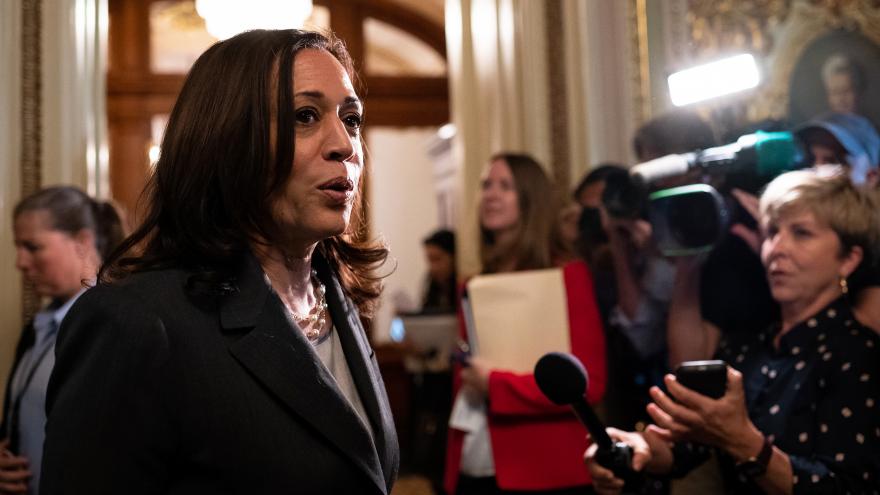 (CNN) -- Vice President Kamala Harris visited the southern border in El Paso, Texas, on Friday to see a migrant processing center, following dogged criticism for not having visited the US-Mexico border and a rocky first foreign trip to Guatemala and Mexico earlier this month.

The vice president toured the El Paso central processing center, a US Customs and Border Protection facility, and spoke with five young girls from Central America while there.

During a news conference at the conclusion of her trip, Harris said the girls were there without their parents.

Throughout her visit, she underscored the need to address the "root causes" of migration, saying during her news conference that "when we have this conversation about what's happening at the border, let's not lose sight of the fact that we're talking about human beings."

"People don't want to leave home if they don't have to," she said.

Harris also participated in a walking tour and attended an operational briefing. Later on in the day, she held a conversation with advocates from faith-based NGOs and shelter and legal service providers.

The visit to El Paso came amid a smattering of criticism that's followed Harris since being tasked by President Joe Biden with leading diplomatic efforts in the Northern Triangle to address immigration.

Harris endured a rocky first foreign trip -- her two-day swing through Mexico and Guatemala -- with sources telling CNN at the time that the trip left some officials perplexed about her bumpy answers to questions about whether she will go to the border.

But when pressed on the fact that she still had not visited the border, Harris responded, "... and I haven't been to Europe. And I mean, I don't -- I don't understand the point that you're making," Harris said with a laugh, adding, "I'm not discounting the importance of the border."

That answer only intensified GOP criticism of her absence at the border.

Asked on Friday why now was the right time to come to the border, Harris said it was important she visit Guatemala and Mexico before visiting the border to build off of those meetings addressing the root causes of migration.

"Being in Guatemala, being in Mexico, and talking with Mexico as a partner, frankly on the issue, was about addressing the causes. And then coming to the border at the advice and actually the invitation of the congresswoman, is about looking at the effects of what we have seen happening in Central America, and so I'm glad to be here. This was always the plan to come here," she said.

When asked if the border trip was essentially the administration bowing down to pressure from Republicans, Harris' chief spokesperson, Symone Sanders, told reporters on a call Thursday evening that "this administration does not take their cues from Republican criticism, nor from the former President of the United States of America."

"We have said over a number of different occasions ... that she would go to the border. She has been before, she would go again. She would go when it was appropriate, when it made sense. And this trip tomorrow, this timing, is what made sense for the vice president's schedule, but also, for our partners on the ground," Sanders added.

Sanders called the visit part of a "cause and effect" strategy, labeling Harris' efforts in Guatemala and Mexico as addressing the cause and her upcoming visit to the border as addressing the effect. That's despite months of countering from aides both publicly and privately that Harris' focus is not the border.

A record number of unaccompanied children crossed into the US this spring, further intensifying GOP criticism of the Biden administration's handling. CBP encountered more than 180,000 migrants at the southern border in May, putting the US on track to surpass the number of border crossings in fiscal year 2019.

Mayorkas said Friday the administration has made "extraordinary progress" dealing with the situation at the border since March.

Harris said the Biden administration has "made progress" on "inhumane conditions" at the border, but admitted "there's still much more work to be done."

"Our administration, it is important to be clear, is working to build a fair and a functional, humane immigration system," the vice president said. "We feel very strongly about that."

Harris was speaking at a round table with faith-based non-governmental organizations, which she said would be a "candid conversation."

She said the Biden administration "inherited a tough situation," but that in five months, "we've made progress."

While in West Texas, Harris will not visit nearby Fort Bliss, where migrant children who crossed the US-Mexico border alone are still spending prolonged time in temporary government facilities, raising concerns among attorneys, who say the conditions are inadequate for kids.

Shaw Drake, a staff attorney and policy counsel for border and immigrants' rights with the ACLU of Texas, told CNN's Ed Lavandera that although the Biden White House has taken some very important steps to address immigration, "the administration, to this point, is not doing enough."

Drake specifically cited the administration's continued reliance on Title 42 and complaints of inhumane conditions at Fort Bliss. Title 42 is a policy enacted during the early days of the coronavirus pandemic that allows the US to expel migrants encountered at the US-Mexico border.

He said the administration took steps to move children out of Border Patrol facilities quickly when there was an increase in unaccompanied migrants, but concerning conditions at other facilities with migrant children remain.

"(N)ow we're facing conditions, concerns at places like Fort Bliss, here in El Paso, where reports continue to surface of children being held in inhumane circumstances and facing abuse by staff and other issues," Drake said. "So there's a long way for the administration to fully adhere to the law and to respect the rights of all migrants ... that are arriving here to the border seeking safety."

Tyler Moran, special assistant to the president for immigration for the Domestic Policy Council at the White House, noted on Thursday's call with reporters that improvements have been made at the facility, including the addition of 50 mental health professionals on site and increases to case management services.

"The administration is concerned by these reports and we do know that HHS has taken steps to address them. We are taking this very seriously. This is serious for the President and the vice president. And we know it's important to HHS to get to the bottom of this and ensure that the highest standards are being upheld," Sanders added.

Asked about Harris' upcoming trip, Biden said on Thursday that Harris has "done a great job so far."

"(T)he reason why it's important that she go down, she's now set up the criteria, having spoken with the president of Mexico and Guatemala, visited the region, to know what we need to do," Biden told reporters in the White House East Room.

This story has been updated with developments on Friday.