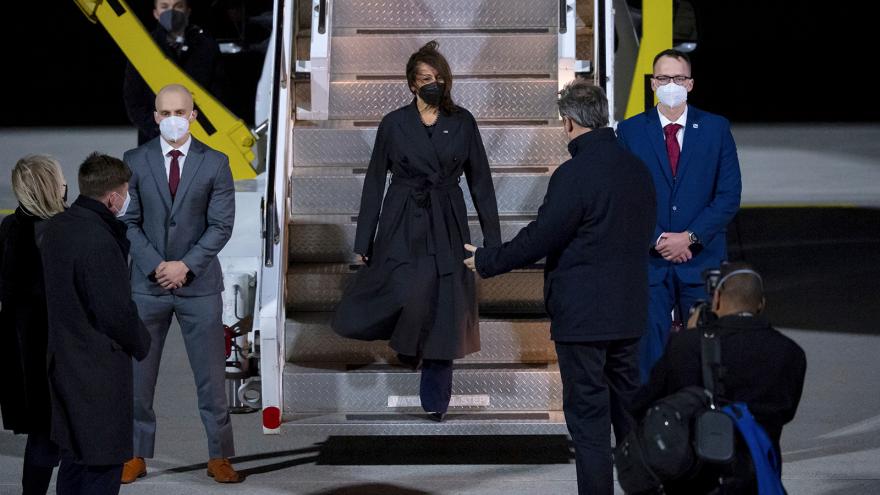 (CNN) -- When Vice President Kamala Harris enters the famed Hotel Bayerischer Hof on Friday in Munich, she'll do so under the largest international gaze of her career.

She leads the American delegation to the Munich Security Conference on Friday as Russia creeps closer to mounting what US officials have warned would be a devastating and costly invasion into Ukraine. President Joe Biden told reporters Thursday he believed an attack could begin "in the next several days," just hours after Harris departed.

And during a tense United Nations Security Council meeting the same day, Secretary of State Antony Blinken said Russia was laying the groundwork to justify starting a war and preparing to launch an attack on Ukraine.

The rapidly intensifying stakes make Harris' trip to the annual gathering all the more important, allies say. She will find herself in the centers of the action, under pressure to perform the tasks of an American diplomat at this heightened moment while allies and foes alike closely analyze every word she says and every meeting she takes, trying to assess the US posture.

Still, she won't be entirely on her own -- Blinken, who has been one of Biden's closest aides for more than a decade, will be attending the conference, too. His presence there will be a useful backstop in case anything goes awry, one US official noted, because -- unlike Harris --he is a known entity to the dozens of world leaders and diplomats who will be in Munich throughout the weekend.

"The goal of the Munich Security Conference will be for our NATO allies to speak in one voice in support of Ukraine's territorial integrity, sovereignty. And that leading voice will be Vice President Harris," Halie Soifer, a former national security adviser to then- Sen. Harris, told CNN in an interview on Thursday. "She has a critically important role to play, especially at this time of crisis for the world."

But any misstep could carry outsized implications, not only for Harris' political future but also the international community writ large.

"We don't know what will happen in the next few days. It's completely conceivable that we could see Russia begin an invasion anytime." said Charles Kupchan, the senior director for European affairs at the National Security Council under former President Barack Obama. "Part of the vice president's mission is to show up."

For Harris, a senior administration official described her key objective in Munich as three-pronged: Focus on the "fast-changing" situation on the ground, maintain full alignment with partners and send a clear message to Russia that the US prefers diplomacy but is ready in case of Russian aggression.

Harris will meet with Ukrainian President Volodymyr Zelensky while at the conference, her first meeting with the Ukrainian leader, as well as give a keynote speech on Saturday. The vice president will maintain a "very intense" schedule when she is in Munich, senior administration officials said. The meeting with Zelensky will be one of several high-level meetings she'll hold.

"I think that this is an important opportunity for her, where she can play a role that a vice president is uniquely able to play and that is to make a visible presentation of the ideals of administration," Joel Goldstein, a vice presidential historian, told CNN in an interview on Thursday.

Kupchan referred to the Munich conference as the "Davos," of international security, a nod to the famed World Economic Forum in Switzerland that draws the upper echelon on foreign leaders.

"The advantages are not just symbolic (for Harris). It's also a great platform. Her speech will be covered globally," Kupchan told CNN in an interview on Thursday. "The Munich Security Conference affords what you might call 'one-stop' shopping in the sense that the key players will be there."

On Friday, Harris will meet with NATO Secretary General Jens Stoltenberg and have a multilateral meeting with the leaders of Latvia, Lithuania and Estonia. Harris will also on Friday hold a separate meeting with US congressional leaders who are attending the conference.

And on Saturday, Harris will deliver her keynote speech. She's expected to focus on addressing the situation on Ukraine's border, the threat of Russian aggression and the latest state of play, per senior administration officials. She'll likely tout the unity among US allies that the administration says they've maintained, as well as make the case that any invasion will leave Russia weaker while reassuring allies of the US' commitment to NATO and partners broadly.

After her speech, she's expected to meet with Zelensky and German Chancellor Olaf Scholz on the margins of the conference, the senior administration official added, in addition to other foreign leaders who were not immediately named.

While Harris' attendance can be seen, allies say, as a clear sign of the trust Biden has placed in his vice president, Kupchan said it also signifies the importance Biden places in the conference.

"Biden is an Atlanticist. His concern about the transatlantic relationship and European security is in his DNA. And he's been working on these issues for decades," Kupchan told CNN. "Transatlantic solidarity has continued when it comes to Russia right through the Trump era, which speaks to the stickiness of the relationship, because Trump tested it. And I think that Vice President Harris' trip to Munich is an investment in ensuring that that solidarity continues."

Still, with grave warnings growing grimmer by the day from US officials, there's a distinct possibility that Russia could invade Ukraine while Harris remains on foreign soil. New estimates from US officials provided Thursday would place the number of Russian forces north of the 150,000 figure Biden cited in a televised address earlier this week, despite Russian claims of withdrawal.

If Russia does attack while the conference is ongoing, Kupchan said, "The conversation then becomes much more urgent."

"Obviously, the vice president and her delegation would need to maintain closer contact with Washington because, you know, developments would be emerging on a minute-by-minute basis. But her message and her task doesn't really change, in the sense that so much of the homework has already been completed," Kupchan added.

'Part of a progression of her of her vice presidency'

The vice president's foray into Western Europe will serve as her fifth trip abroad during her tenure. Her performance on the international stage has not been spotless, with moments amplified by the right and criticized from the left over her "do not come" message to migrants looking to come north to the US' southern border during her first trip to Guatemala and Mexico.

A subsequent trip to Southeast Asia, though Harris' individual performance raised no issues, was overshadowed by the tumultuous fallout of the US' bungled withdrawal from Afghanistan, leaving Harris to project competence in a moment of doubt from allies. Subsequent trips to Paris and Honduras, though months apart, brought the vice president praise for completing both trips gaffe-free.

At the start of her tenure, those close to Harris told CNN that foreign policy and national security were key areas she wants to develop in her portfolio. Harris' foreign policy experience is less than her recent predecessors as she had only been working in Washington for four years before taking this new job. Harris began private lunches with Blinken -- ones that White House official say still continue -- and the pair share a good relationship, speaking frequently. Harris has also spent much of the Biden administration's first year in power meeting with dozens of foreign leaders who come to the White House.

Allies say Harris' trip to Munich fits well into her wheelhouse because of her work as a freshman on the high-profile Senate Intelligence Committee.

Soifer, an adviser for Harris at the time, said she played a leading role on the committee's investigation into Russian interference in the 2016 election.

"She got a crash course in terms of (Russian President) Vladimir Putin's intentions and his strategy. While much of that experience was acquired behind the scenes, it did provide deep experience in terms of the threats that the United States and the global world order face from Russia in this moment," Soifer said.

Biden has flexed his decades of experience in dealing with international matters during the latest spike of Russian-Ukrainian tensions, specifically the years he spent as the US frontman on the issue during his last stint in the White House.

While aware he cannot read Putin's mind, Biden has spent long stretches trying to explain the enigmatic Russian leader to his aides, according to people present for the conversations.

Those conversations have likely served as a valuable resource to Harris in her preparations for this critical trip.

"I think the best preparation that she can possibly do, which I know she is doing, is her frequent conversations and meetings with President Biden," Soifer told CNN.

Soifer added that Harris is a thorough and meticulous preparer for moments like this.

"Their conversations about this crisis will inform her approach in Munich. She is there speaking for the President and having spoken with him so many times in the lead up to this conference, it's clear that she is representing his views and those of the administration," she said.

The senior administration official told reporters that Harris and Biden have been repeatedly engaging with each other on the issue. Biden has attended this conference on multiple occasions, both when he was vice president and as a senator.