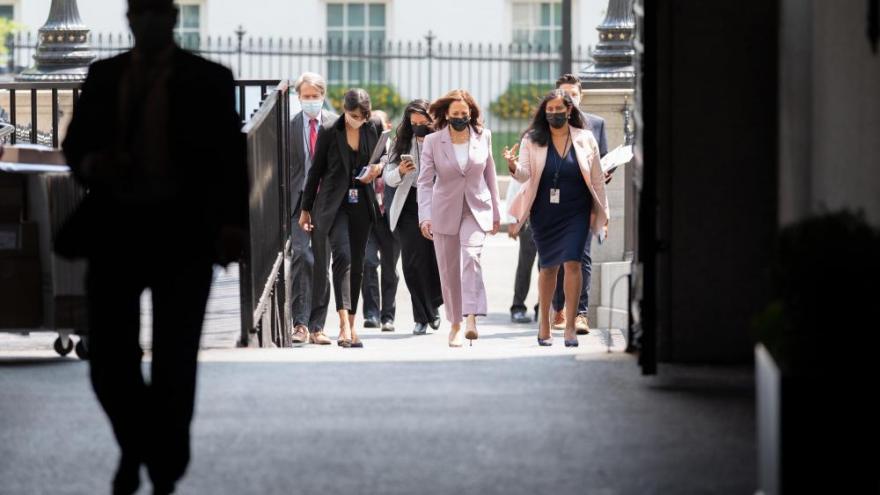 Singh becomes the latest high-profile departure from the vice president's office, which suffered a turbulent first year due to missteps and messaging failures. She will join the Department of Defense.

Ernesto Apreza, a senior adviser in the White House Office of Public Engagement, will become deputy press secretary and is expected to focus on engaging local and state press, as well as specific key coalition groups. Apreza previously served on the Biden-Harris campaign, as well as on the then-mayor of Seattle's staff.

Last year, communications director Ashley Etienne and press secretary Symone Sanders announced they would be vacating their positions. Those departures were followed by the exits of two additional staffers in the new year.

In an email sent to staff, and obtained by CNN, Simmons said the vice president's new press secretary is expected to be a woman and could be announced soon. The hire is in the final stages of the process, a second official said. The email provided no further specifics.

Politico was first to report on the latest staffing changes on Harris' team.

The press shop will also see some reshuffling.

Herbie Ziskend will become a senior adviser for communications, a promotion from his current role as deputy communications director. Rachel Palermo, who worked on Pete Buttigieg's presidential campaign and on the Biden-Harris transition, will take Ziskend's previous role and focus on the day-to-day operations of the communications shop.

Singh had been with Harris' team since the 2020 campaign trail, serving as press secretary for Harris. She was also senior adviser for then-Sen. Harris' Fearless for the People political action committee.

While Harris had what some described as a frustrating first year in office, the latest staff shake-ups follow her recent trip to Poland, during which she avoided any public discord and generated little Republican criticism. Harris was prepared and engaged on the trip as she worked to smooth over a dust-up with Poland over questions about sending fighter jets through the US to Ukraine.

CORRECTION: A previous version of this story misstated Ernesto Apreza's title. He is a senior adviser in the White House Office of Public Engagement.