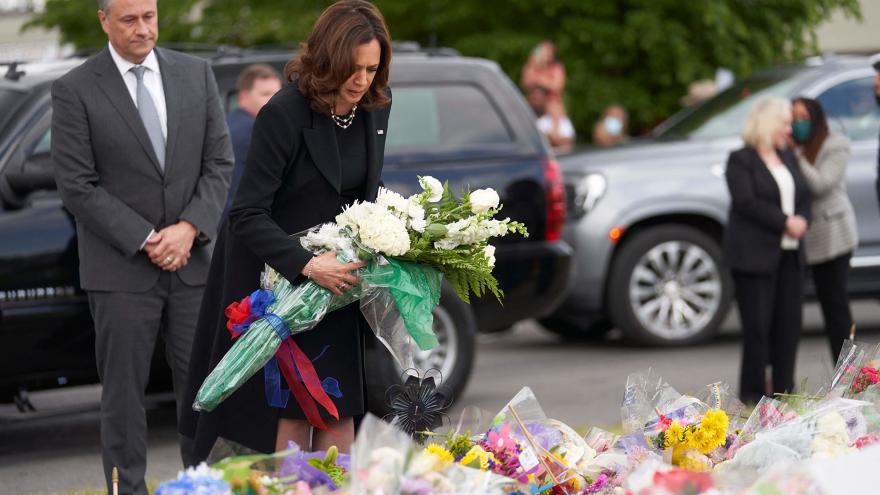 (CNN) -- Vice President Kamala Harris called for an assault weapons ban Saturday, saying that in the wake of two back-to-back mass shootings such arms are "a weapon of war" with "no place in a civil society."

"On the issue of gun violence, I will say, as I've said countless times, we are not sitting around waiting to figure out what the solution looks like. You know, we're not looking for a vaccine," Harris told reporters in Buffalo, New York, after attending the funeral for a victim of a mass shooting there earlier this month. "We know what works on this. It includes, let's have an assault weapons ban."

The comments from the vice president come as the nation is reeling from both Buffalo, where 10 people were killed in a racist mass shooting at a supermarket, and from a mass shooting at an elementary school in Uvalde, Texas, earlier this week in which 19 children and two teachers were killed by a gunman.

Harris, who has previously called for an assault weapons ban, also on Saturday called for enhanced background checks for firearm purchases, noting that, to date, there have been over 200 mass shootings in the country, despite being "barely halfway through the year."

"Everybody's got to stand up and agree that this should not be happening in our country, and that we should have the courage to do something about it," she said.

Harris did not respond to a reporter's question on whether President Joe Biden would pursue an executive order if Congress failed to pass meaningful gun reform. The President said during a trip to Buffalo last week that there was "not much on executive action" that he could do to further strengthen gun control measures. He said he needed to instead "convince Congress" to pass legislation like the 1994 assault weapons ban.

Biden will visit Uvalde, Texas, on Sunday to meet the families of the children and teachers killed during the mass shooting at Robb Elementary School.

Harris was in Buffalo on Saturday, along with Second Gentleman Doug Emhoff, to attend the funeral of 86-year-old Ruth E. Whitfield, the eldest victim of the shooting at the Tops Friendly Markets store on May 14.

During the service at Mt. Olive Baptist Church, the vice president, who was invited to speak by the Rev. Al Sharpton, said the nation was "experiencing an epidemic of hate."

Harris said the current moment "requires all good people, all God-loving people to stand up and say, 'We will not stand for this -- enough is enough, we will come together based on what we all know we have in common, and we will not let those people who are motivated by hate separate us or make us feel fear."