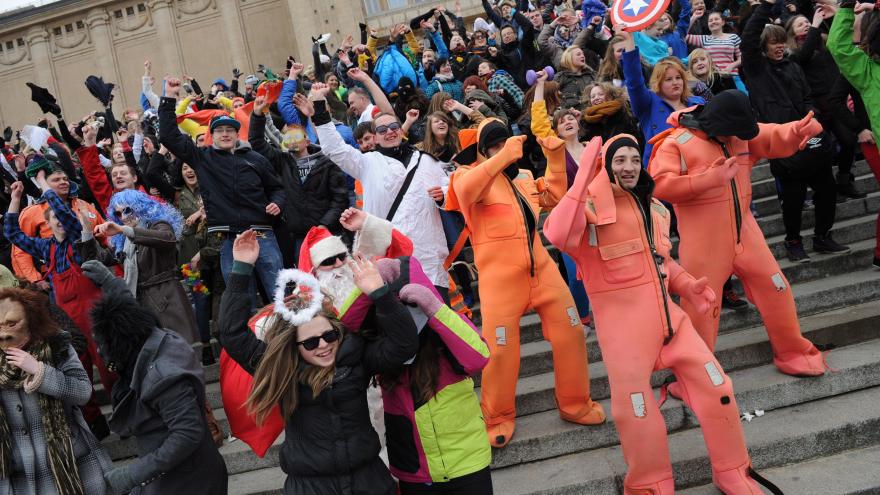 (CNN) -- The song that swept the nation during 2013 has just reached its 10th birthday.

"Harlem Shake" was released by Harry Rodrigues, a producer and DJ professionally known as Baauer, on May 22, 2012. The name of the song was inspired by a line from Philadelphia rapper Plastic Little's "Miller Time," which was itself a reference to a dance move made popular in the 1980s in Harlem.

In early 2013, a group of Australians released a video credited with shaping the format of the dance craze: One person, surrounded by seemingly oblivious bystanders, dances solo to the song for 15 seconds, often pelvic thrusting or otherwise dancing with repetitive, jerky movements. Then the beat drops, and everyone joins in with bizarre, flailing dance moves and sometimes elaborate costumes or other variations on the trend.

The trend quickly took over the internet, with groups like the Miami Heat, English National Ballet, and even a squadron of the Norwegian Army all releasing their own "Harlem Shake" videos. American indie rock duo Matt & Kim won a Guinness World Record for largest-ever "Harlem Shake" after they brought together a crowd of 3,344 to dance to the song.

"I remember when it first became a meme it felt out of my control and I didn't like it ... Now I have 10 years perspective I see that it brought people together and made people happy, which is the best thing I could ask my music to do."