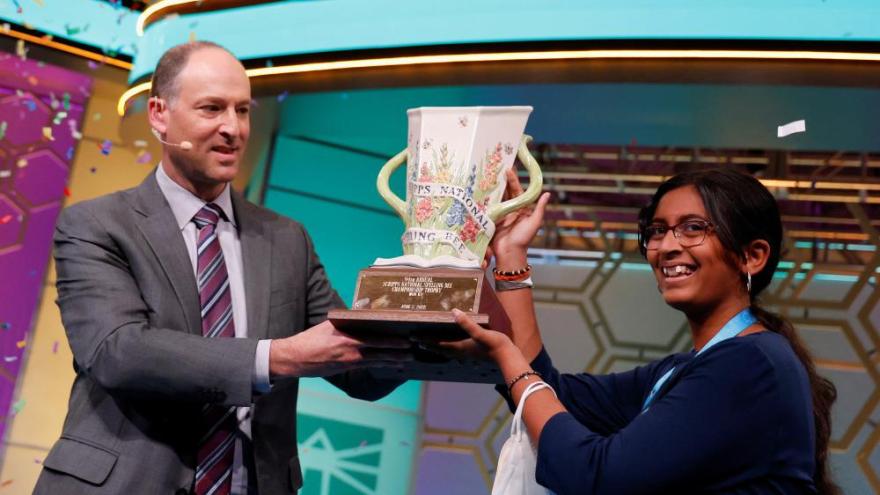 (CNN) -- History was made Thursday night when Harini Logan, 14, won the first-ever spell-off at the 2022 Scripps National Spelling Bee.

Harini went head-to-head with Vikram Raju, 12, in the spell-off, a format that tested the contestants on how many words they could correctly spell within 90 seconds.

Harini spelled 21 out of 26 words correctly, while Vikram got 15 out of 19 words right.

"I think honestly so surreal, it's my fourth time at the Bee," Harini said on stage holding the trophy. "This is such a dream, this is my fourth bee and I'm just so overwhelmed."

Of the first-ever spell-off, Harini said: "At first I was a little uneasy and I decided to take it in stride ... I just had to take a deep breath and tell myself to go out there and do my best and whatever happens, happens."

The Spelling Bee, which features elementary and middle school students spelling words that would cause most adults to stumble, has had a tumultuous few years.

Because of Covid-19, the competition was canceled in 2020 -- a significant shake-up for what is billed the nation's largest and longest-running educational program. (The National Spelling Bee was launched in 1925.)

The Bee returned last year, but with a few changes. The event featured three rounds completed virtually, rather than in-person, with 209 contestants -- down from 562 in 2019. The finals were then held in person at ESPN Wide World of Sports Complex in Florida, rather than in the National Harbor in Maryland, where the event had typically been held in recent years.

Though still down from pre-pandemic numbers, this year began with 234 contestants, an increase from last year. Of those who started, only 12 participated in Thursday's final competition.

Another big change this year was the televised broadcast of the Bee. Despite almost three decades on ESPN, the the competion aired on ION and Bounce. ESPN has been the home of the Scripps National Spelling Bee since 1994, longer than any of the current contestants have been alive.

The preliminary rounds began Tuesday, while the quarterfinals and semifinals took place Wednesday.

This year's host was LeVar Burton. The Emmy and Grammy-award winner hosted the semifinal and the final round of the event.

In a statement in December, Burton called the position "an honor."

"Like a lot of folks, I look forward to the competition every year and am excited to be a part of this wonderful tradition that celebrates excellence," he said.